Performing and Creating as Equals Across the Age Gap 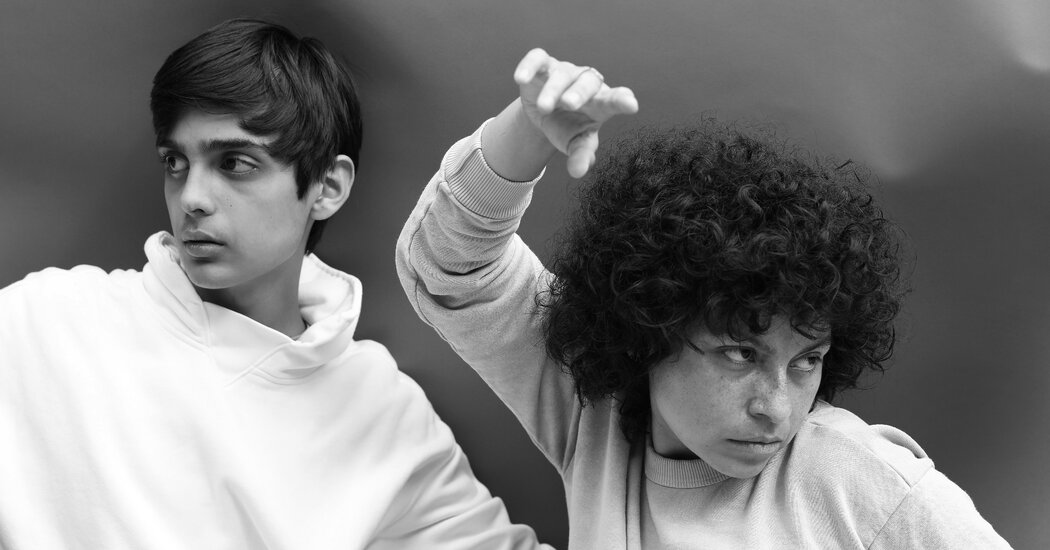 The sound of heavy footfalls filled a studio at Abrons Arts Center on a recent afternoon, as the choreographer Mariana Valencia and her young collaborator, Heera Gandhu, walked decisively around the room. With their arms raised to one side and hands gnarled into claws, they called to mind the classic move from Michael Jackson’s “Thriller,” but their faces betrayed little emotion. The recognizable gesture, combined with their even-keeled energy, managed to say “horror movie” and “postmodern dance” at the same time, a fitting encapsulation of their interests.

Later in the rehearsal, reclining on the floor, they asked each other: “What was it like when you were 12?”

“When I was 12, I would decorate my room with magazine pages,” Valencia said.

“Magazines — who has those?” Heera replied incredulously. “When I was 12, I started dancing, through my rehearsals with you.”

Heera is now 13 — as of two weeks ago — and for the last six months he and Valencia, 38, have been collaborating across their 25-year age difference. Their show, “Heera,” opens at Abrons, on the Lower East Side, on Friday. Created in the playfully autobiographical and genre-mixing style for which Valencia, a celebrated solo performer, is known, the project has become an exercise in working together as equals despite a generational divide.

Layering understated movement with conversational text, in obliquely funny and surreal ways, “Heera” prods at themes of memory, imagination, aging and coming-of-age. At its core is the relationship between the two people onstage, who resist typical hierarchies of teacher and student, choreographer and dancer, establishing something closer to a friendship. Valencia describes the work as “abstracted getting-to-know-each-other, in front of an audience.”

The idea for an intergenerational work came from Ali Rosa-Salas, the artistic director of Abrons, who grew up in New York and took part in similar collaborations as a teenager through the Brooklyn organization Dancewave. Since arriving at Abrons in 2017, she has been looking to deepen connections between its artistic and educational programs, which include performing and visual arts classes for students 3 to 19. She wasn’t starting from scratch; since the mid-1990s, the center has been home to Urban Youth Theater — Heera is a member — where young performers can take their training to the next level in productions directed by professionals.

Rosa-Salas, 31, approached Valencia before the pandemic to gauge her interest in working with students. In the past couple of years, the need for robust creative outlets for children and teens — where they’re taken seriously as artists — has only grown more urgent, Rosa-Salas said. She noted that Abrons is not alone in providing such spaces, citing, as just one other example, the Young Dancemakers Company, a summer program for public high school students, whose alumni recently performed with the choreographer Oona Doherty at the Irish Arts Center.

“This has been a really hard two-and-a-half years of remote school, of anxiety around Covid, of anxieties around how to interact and engage with people, let alone share how you feel,” Rosa-Salas said in a phone interview. “I think artistic practice and this kind of devising process, it sounds corny, but it really has the potential to heal a lot of trauma.”

“That’s my meta hope for this work,” she added, “even if it’s operating on a micro level.”

Along the same lines, Rosa-Salas worked with the choreographer Marguerite Hemmings and the new media artist LaJuné McMillian, who developed a video and performance piece for local high school students, presented at Abrons last year. Rosa-Salas said she was drawn to artists who see this kind of process as a mutual teaching and learning exchange, rather than “reinforcing that hierarchy of ‘you are learning from me as the adult professional.’” Embarking on her work with Heera, Valencia brought just that outlook.

“It didn’t feel interesting to me to be like, ‘Now I’m just going to make you do what I say,’” Valencia said in a phone interview. “I think I was recalling my experience of being that age and being told what to do for a stage practice, whether it was singing or an instrument or acting” — she came to dance later — “and I remember feeling, ‘Oh, yeah, I’m being given this because I’m a kid.’ I wasn’t interested in being that adult to a younger person.”

When they began rehearsing in January, Valencia and Heera, who attends Tompkins Square Middle School in the East Village, barely knew each other. Much of their time in the studio has been spent unearthing shared interests. Among their discoveries: Both love Caesar salads, “soft clothes” (like sweatpants) and horror movies, which have become a central subject of the work.

Speaking with Valencia in the courtyard of Abrons on a breezy June day, Heera, who lives with his family in Fort Greene, Brooklyn, said that the show “is a lot of things, so it would be hard to summarize in a couple of sentences.” He described his favorite part, a passage of precise unison movement known as “dolphin” — it features a sweep of the arms reminiscent of a dolphin’s tail — as “probably a perfect dance. It goes along with our play.”

Originally Valencia had envisioned a larger cast, but when only four students showed up to the audition in October, she took that as a sign to scale down to a duet.

“There was something about the way Heera moved,” Valencia said as they sat together in the courtyard, recalling the movement improv games they played at the audition. “I was like, ‘Oh, this kid can dance! And I’m not sure he knows that.’” She remembers thinking: “As long as someone can riff and feel comfortable in their body, that’s what I’m looking for.”

Before meeting Valencia, Heera had no formal dance experience; acting has always been his main interest. (He also directs horror movies at home starring his two brothers, ages 10 and 14.) But Randy Luna, the director of education at Abrons, had noticed his distinctive physicality as a performer. When Luna choreographed a Zoom version of “The Wiz” for Urban Youth Theater, he saw “this lightness” in Heera, a “graceful and very peaceful” way of moving, Luna said.

Reflecting on his role with Valencia, Heera observed: “It’s not really like we’re dancing. It’s more just like we’re moving, and we do it in a way where you’re not really self-conscious about how you’re dancing.”

His parents, Dale Gandhu and Monica Varma, said in a phone interview that Heera — who, Varma said, is named “after a beloved Bollywood character” — had revealed few details about his coming performance, wanting to keep it a surprise. But his mother could sense, even from the little he had shared, that Valencia had drawn out a more self-assured side of him.

“Naturally he’s sort of an introvert,” Varma said. “I think this opportunity has given him the platform to express himself, because Mariana is actually trying to ask him what he thinks.”

Just a few days after his professional debut in New York, Heera will move to Dallas with his family. (Gandhu, who works in market research for PepsiCo, said he was taking a work-related opportunity there.) Heera doesn’t seem too disappointed.

“I like New York City,” he said, “but I don’t really like the city hustle and the trains or getting anywhere. It’s not that easy.” He added that he’s excited “to be able to drive around in a car” and have his own bedroom in a bigger house (in Brooklyn he shares a room with his brothers).

In “Heera,” Valencia has made space for him to dream further into the future. Without giving too much away: Twenty-five years from now, he’s an actor, and they’re still friends.

NFT’s are Crashing and Creators Are Wondering What’s Next?

Tami Neilson: Kingmaker review – the queen of Kiwi country at her imperious best |…

‘Back to the Middle Ages’: Glastonbury stars rail against Roe v Wade decision |…

Lightning Push the Avalanche to Game 6 in the…

These children lost their parents to COVID. Here’s…

Why gas prices are so high, according to history…