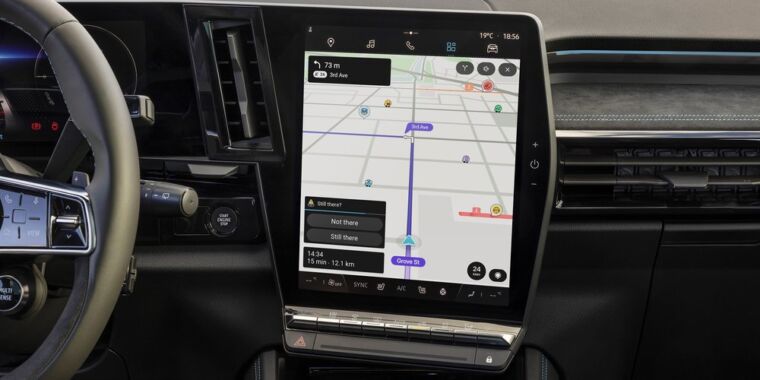 Google’s other big navigation app, Waze, is coming to Android Automotive. Today the company announced the move on the Waze blog, saying, “The new dedicated Waze app for cars brings the best of Waze real-time navigation, routing and alerts feature[s] right in the car’s display. When you drive, you can experience safer and more convenient journeys while eliminating the hassle of using a smartphone.”

Google has two different car products with really confusing branding. The first is Android Auto. This is Google’s version of CarPlay—an app that runs on your phone but projects a special car interface to your vehicle’s dashboard display, showing off Google Maps and compatible Android Auto apps on your phone. Waze has been on Android Auto since 2017. Today’s announcement is for Android Automotive, a different product from Android Auto. Automotive, the fully spelled-out version, is a full operating system instead of an app. Cars have infotainment computers in them, and Android Automotive OS (AAOS) has the car run Android. Even if there’s an iPhone in your pocket, your car runs Android on the car’s internal computer instead of something like Linux or QNX. AAOS has a car version of the Play Store, where you can download apps directly to your car, and it’s this platform that Waze is arriving on. Android Automotive is pretty rare out there in the world, but you’ll see it on new Volvo/Polestar, Ford, and GM cars, mostly. Sometimes Google or car manufacturers will call AAOS “cars with Google built-in.”

The app situation on Android Automotive is tough. In-car infotainment systems are heavily regulated due to safety concerns to the point that every app and individual interface needs to be vetted by regulatory bodies around the world. This is incredibly difficult, expensive, and time-consuming for app developers, which is a big reason Android Automotive only has 37 apps right now. You can see the full list here. AAOS only allows for media and navigation apps, and even the media apps don’t get a custom interface—you just plug into Google’s interface with your own branding and audio stream, which alleviates the regulatory burden but limits what apps can do.

Waze’s car app looks a lot like the phone app, but bigger, with the all-important report button and tons of icons detailing user reports for police, construction, and other road hazards. The screenshot even shows a “Still there?” prompt, asking the user to confirm that a previously reported hazard is still active.

Despite building an app for Google’s car OS, Waze is limiting the rollout to certain vehicles for now. The company says the app is exclusive to “the new Renault Austral Hybrid and Renault Megane E-Tech electric vehicles in Europe.” The weird rollout might have to do with all those regulatory issues car apps have to deal with, and Waze says it will bring the new app to “more users across the globe in 2023.”

The White Lotus: Do Harper and Cameron Hook Up?

New TikTok trend may be behind diabetes drug shortage