Porsche previews something special for its 75th anniversary 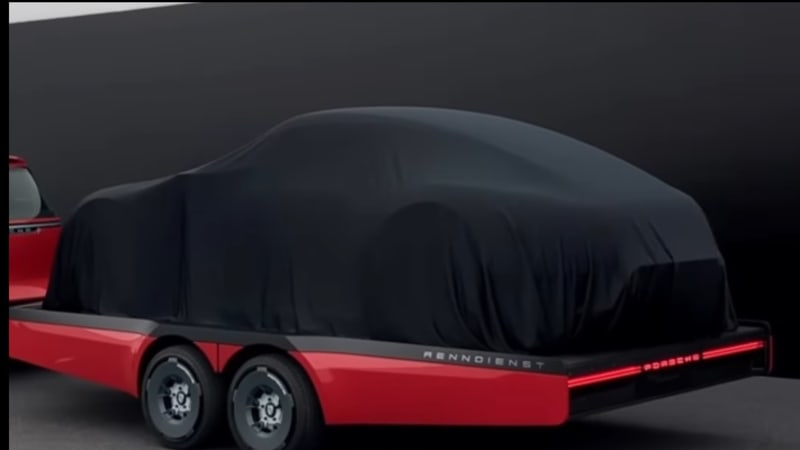 Porsche is celebrating two big anniversaries in 2023: It’s turning 75 years old, and its emblematic 911 is turning 60. We don’t know how the company will mark the second milestone yet, but it previewed one of the surprises it has in store to celebrate its 75th on its Instagram page.

Footage published on the social media platform shows the Renndienst, a futuristic-looking minivan created as a design study and never built, pulling an equally futuristic-looking trailer with a covered car on it. Details about the car haven’t been released yet, but it unmistakably looks like a 911 — or at least 911-based. The covered model appears next to a pair of gray 356s in a separate post (embedded below).

The 356 duo could hint at what’s under the cover. As the first mass-produced Porsche model, the 356 is a hugely important part of the firm’s history, so we wouldn’t be surprised if the commemorative car is a 911 decked out with heritage-inspired styling cues. If that’s the case, the car will likely come from Porsche’s Exclusive Manufaktur division and land as a limited-edition model. Of course, this is pure speculation.

We won’t have to wait long to find what Porsche has in store: The commemorative 911 is scheduled to make its public debut on Thursday, January 26, at 0:01 a.m. European time, which is 6:01 p.m. this evening in New York. Whatever it is, it won’t be the last of its kind because it’s being presented as “the first of our anniversary year surprises.”

As for the Renndienst, don’t hold your breath: Porsche previously confirmed it won’t make it.

Pictures Of Sidharth Malhotra As Desserts