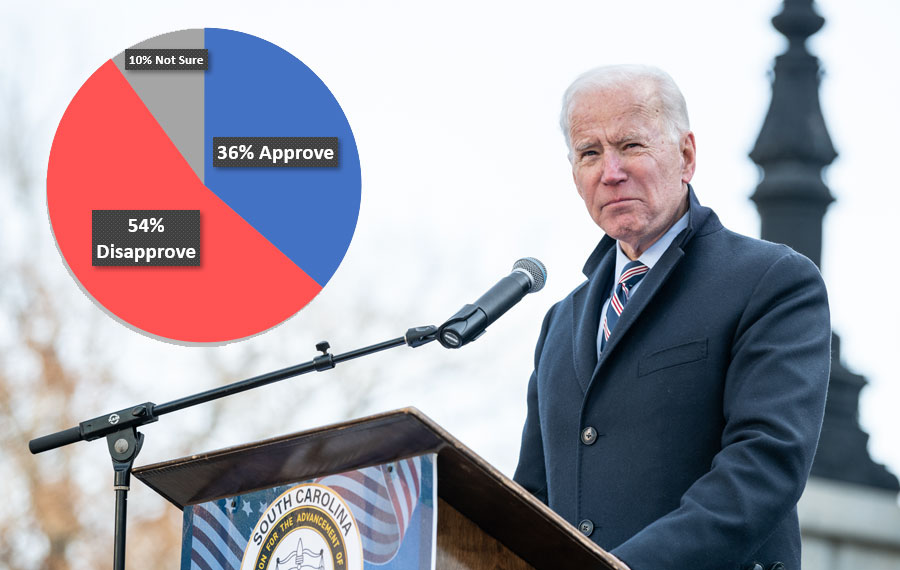 WASHINGTON, D.C. – Just one week after his approval rating had hit an all-time low, a new poll puts President Joe Biden’s numbers even lower, with the majority of respondents saying that they would prefer that Republicans retake the House and Senate in 2022.

According to a new Quinnipiac University poll published Thursday, President Biden currently has an overall approval rating of just 36% nationwide, which represents a 2-point drop from a USA Today/Suffolk University poll released November 7.

Approximately 54 percent of those polled said that they disapproved of Biden’s job performance, with 87 percent of Democrats approving of the president and 94 percent of Republicans disapproving. Meanwhile, 56 percent of independent voters – whose votes will be vital in the upcoming 2022 midterm elections – disapprove of Biden’s work, as opposed to a mere 29 percent who said they approve.

The poll results also illustrated that 46 percent of respondents felt that the country would be better served if Republicans regained control of both the House of Representatives and the Senate in 2022, as opposed to just 38 percent that felt the Democrats should retain or build upon their slim majority in both chambers.

Quinnipiac polling analyst Tim Malloy called the poll results “An ominous double whammy for the Democrats with midterms less than a year out.”

This Morning guest mistakenly praises Dermot O’Leary for coming out

7 Things You Need to Know

What No One Is Saying