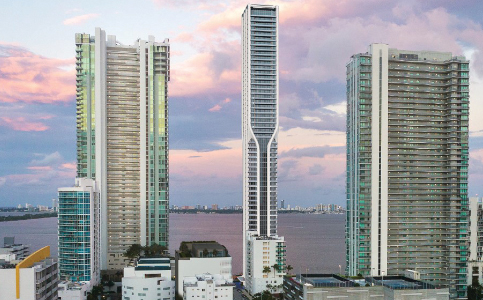 A skyscraper reaching 58 stories planned for the Edgewater area in Miami, called 710 Edge, has been recommended for approval by the city’s Urban Development Review Board.

Documents identify the developer as 710 Edge LLC. The project was designed by O’Donnell Dannwolf & Partners Architects.

The sleek tower is planned for a waterfront property at 710 NE 29th St. The application says the project aims to capture the essence of Miami lifestyle and modern architecture through its pronounced features.

Parking for up to 160 vehicles and 18 bicycles is planned for a separate nearby facility with its own commercial space.
The overall floor space for the project is 342,848 square feet.

Attorney Iris Escarra, representing the developer, said this project will include enhanced setbacks, a public baywalk, and a roof helipad.

Ms. Escarra wrote: “The project will significantly enhance this currently vacant land and will contribute to the improvement of the area’s urban fabric. The project has been designed to prioritize pedestrian interests along the ground floor. The project’s landscape design provides an inviting public sidewalk which is activated by ground floor commercial uses.”

The developer is requesting special permission via a warrant to allow the helicopter pad on the roof.

Under current zoning the helipad would be allowed under a warrant but the helicopter landing site is only to be used for landing and takeoff with no fueling, repair, long-term parking or storage of helicopters.

The developer is also requesting waivers from the zoning code, including:

■To permit, along a primary frontage, above ground parking to extend into the second layer, if an art or glass treatment of a design approved by the planning director, with the recommendation of the UDRB, is provided for 100% of that portion of the façade.

■To permit up to a 10% reduction in the side setbacks above the eighth story for the tower parcel.

■To permit up to a 10% reduction in the front setbacks above the eighth story for the tower parcel.

Architect Kurt Dannwolf told the board the tower’s footprint will be 70 by 120 feet, with a ground floor residential lobby and a restaurant facing Biscayne Bay. All mechanical equipment is inside the building, he said. The tower will include amenity decks and some commercial uses at the top, although no program is locked in yet, he said.

Ms. Escarra noted the zoning requires that the commercial-retail spaces can only be small retail bays that serve the community.

Board member Fidel Perez questioned whether persons parking at the separate garage across the street will get wet in rainy weather having to walk to and from the garage.

Mr. Dannwolf said valets will be stationed at both the garage and tower, to get a car and bring it to the tower, and also golf carts to take residents to and from the garage.

“I like that the massing is a very simple massing,” said board member Robert Behar. He said he also likes the design of the balconies.

“And I appreciate the change in articulation of the tower,” he said.

Acting board chairman Ignacio Permuy said he had concerns with the buildings’ design that there is little to no connection between the tower and the garage.

“It’s a block away, that’s fine, but I don’t think there was an attempt to make a connection,” he said.

“The skin of the garage is beautiful,” said Mr. Permuy, but doesn’t connect to the look of the steel and glass tower. He called it a “missed opportunity in designing the façades.”

He continued: “With those linear elements it looks more like an office building to me … the corners look more like an afterthought.”

Mr. Permuy noted the site is on the water on two sides. “This is a corner of a very special lot. You do have two frontages. You have so many opportunities … it falls dreadfully short of the potential for that site,” he said.

Mr. Behar suggested, “make the upper levels and lower levels come together better …. there is opportunity for a better dialog (on the tower).”

Mr. Dannwolf responded, “We can study that.”

Mr. Permuy concluded, “You have a very elegant product, and I’ll vote for approval, but I see a missed opportunity on the east and south sides. They are not as subtle and sophisticated as it could have been.”

Ms. Escarra said the developer’s team will study the connectivity between the tower and the garage “architecturally,” and study elevations to see if there are ways to get the upper floors of the tower to connect more with the look of the lower levels.

After the Gun Ruling – The New York Times

Naomie Harris: ‘The Depp vs Heard trial was rammed…