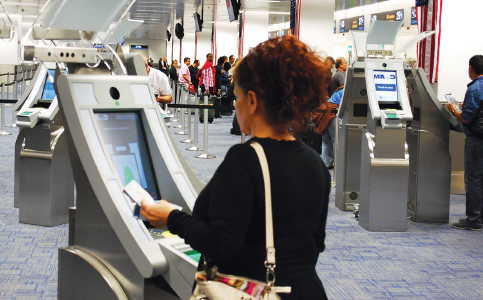 As Miami prepared to welcome vaccinated international travelers from 39 countries this week for the first time since early 2020, the Greater Miami Convention & Visitors Bureau noted a great improvement in flight bookings and hotel occupancy in the second half of the year.

Through August, 7.7 million of MIA’s 22.8 million total passengers were international.

“MIA is planning to add additional seat capacity for the last quarter, about 10% more seats,” said Andrew Wobensmith, director of research and business intelligence at the Greater Miami Convention & Visitors Bureau (GMCVB). “So there will be more capacity available at the airport, which leads me to believe that they’re anticipating more traffic than they’ve had. So that’s a good thing.”

According to Kayak flight trends, Miami is 7 points above average for flights and hotel searches online compared to searches in 2019. The major 25 hotel US destinations average a negative 18% from 2019. There is a steady rebound for most American destinations, and Miami is recovering faster than most, being the sixth most searched hotel market in the country, a spokesperson for the GMCVB said.

Booking pace for international travel is down only 46.2% as of Sept. 30 compared to 60.9% as of October. The pace has also been decreasing in the short term but improving further out, with more longer-term bookings.

“People usually book for hotels one or two months in advance,” Mr. Wobensmith said. “What happened was that during the pandemic people stopped booking so far ahead, since they weren’t sure about travel. [They] booked really short-term, and now we’re seeing that the booking window has gone longer.”

As the short-term window for flight and hotel bookings have decreased, behavior is returning to normal. People are becoming more confident about travel as they are booking further out again, Mr. Wobensmith explained.

At the GMCVB’s 36th annual meeting and State of Tourism conference at the JW Marriott Miami Turnberry hotel, President and CEO David Whitaker said Miami has missed its 6 million international visitors that represent 29% of all travel.

“We’re actually pacing ahead 111% of where we were in terms of average data,” he said at the conference. “And that’s exciting, because it shows the value of the destination. So while occupancy points have been down, we’re going to be on the prepping preface of this new beginning.”

Rolando Aedo, bureau chief operating officer, told the conference that international travelers are critical to Miami-Dade. “They represent, not just 50% of our visitors, but about 70% of our economic impact.”

“International travel represented in our best of times almost 30% of all of our visitors,” said Mr. Whitaker in an interview. “So, if you lose 30% of your core it’s going to have an impact. That represented just under 5.8 million people, and they stayed twice as long; they spent twice as much. Our international market is vital to our success.”

U.S. Thanksgiving air journey set to be busiest since pandemic started By Reuters

As OPEC Plus Nears a Milestone, Focus Shifts to Russia and the U.S.

How carbon emissions got caught up in a Supreme Court showdown