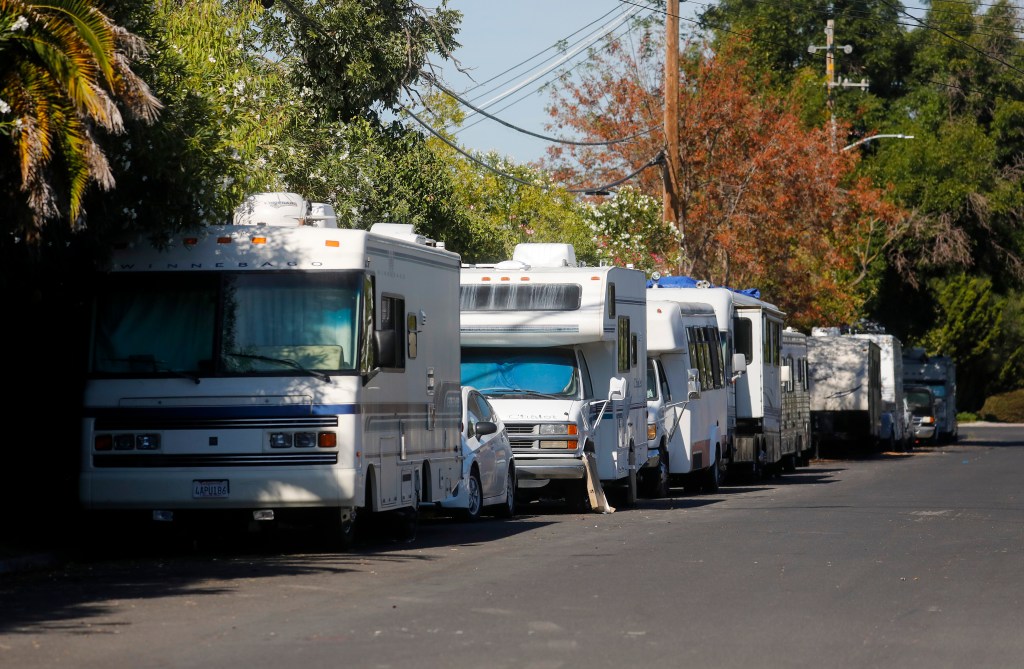 MOUNTAIN VIEW — RVs could once again be banned from parking overnight on most city streets starting next week as part of a tentative settlement agreement between the city and RV dwellers that also would keep three miles of streets without parking restrictions.

The tentative agreement, which still needs to be approved by the court, will provide several protections for residents living in oversized vehicles. Those include a guarantee that at least three miles of streets will be available for parking without overnight restrictions, according to plaintiffs in the lawsuit, which included the Law Foundation of Silicon Valley, the ACLU Foundation of Northern California, Disability Rights Advocates and other pro bono partners.

The city earlier this month published and distributed a street map showing where RV dwellers can park their cars and where they will be subject to the narrow street and bike lane street restrictions.

The city will start ticketing oversized vehicles again Oct. 1, but will give 72 hours notice before towing. Mountain View city has not been enforcing the RV ban during the lawsuit. Police also will have the discretion to extend the time before a vehicle is towed.

And people with disabilities will be given leeway, such as more time to move their vehicle.

The city also may immediately tow a vehicle that has gotten more than three tickets or is blocking traffic or a driveway.

Celerina Navarro — a plaintiff in the suit and Mountain View resident living in her RV — was pleased with the settlement results.

“The outcome of the case is good because without this settlement we would be facing the threat of displacement,” Navarro said. “Now people can feel more at ease knowing that they can remain in Mountain View without being displaced.”

Mountain View spokeswoman Lenka Wright said in a statement the city is “pleased that a settlement agreement has been reached,” and noted the trash cleanups, outreach and distribution of resources for RV residents that were done as the lawsuit continued. She also said the city is working hard to increase the number of affordable homes, RV parking spaces, shelter beds and transitional housing for homeless residents.

The class action lawsuit was filed in U.S. District Court last summer by six plaintiffs on behalf of the dozens of Mountain View RV dwellers facing displacement. It asserted that the citywide RV parking ban was unconstitutional, inhumane and disproportionately impacted people with disabilities, in violation of federal and state law.

As the Bay Area became one of the most expensive areas in the country to eke out a living as a low-income person, more and more people began to live in their cars and RVs and park on Peninsula streets, igniting a moral and civic debate at the heart of the homelessness crisis.

In Mountain View, after years of complaints from residents about RVs parking on residential streets, voters approved an RV ban ballot measure with 56.6% of the vote in the November 2020 election effectively banning oversized vehicles from about 90% of the city’s streets.

Since then, RV dweller advocates and the city have battled over parking restrictions and their effect on those living in their vehicles, including working families. Advocates said the RV population may have even increased since the lawsuit was filed, blaming it on the effects of the coronavirus pandemic that has dealt economic hardship to many.

“We are pleased that the city came to the table in negotiating these protections that will allow some vulnerable populations to remain in their chosen communities,” said Quyen Ta, a partner of King & Spalding LLP, one of the law firms representing the RV dwellers. “This tentative settlement will prevent the displacement of many long-time residents of the city of Mountain View who can no longer afford permanent housing.”

However, for those living in their cars, the settlement offers few protections.

For the Law Foundation of Silicon Valley and others, enforcement of the RV parking ban by Mountain View would have unfairly impacted people with disabilities, Spanish-speaking families and people of color, all of whom already experience homelessness at disproportionate rates.

“These kinds of parking ordinances effectively punish residents for not having traditional homes or the financial ability to afford permanent housing, all while subjecting low-income residents to the constant threat of excessive fees, seizure of their home and belongings, and banishment from their community,” the press release says.

Bill Freeman, senior counsel of the ACLU of Northern California, said the settlement agreement shows other cities that “it is possible for a city to take measures to respect unhoused residents.”

“Unfortunately, we’ve seen cities across California take a punitive approach to addressing the housing and affordability crisis our communities are facing,” Freeman said. “Rather than take up measures that serve the needs of all residents, regardless of income or housing type, many cities have chosen to target and harass people for their housing status.”

UK’s approval of new coal mine criticized as ‘deeply damaging…

Air India to invest over USD 400 million on wide-body aircraft refurbishment : The…

A Texas Crypto Firm Is in Trouble for Defrauding…