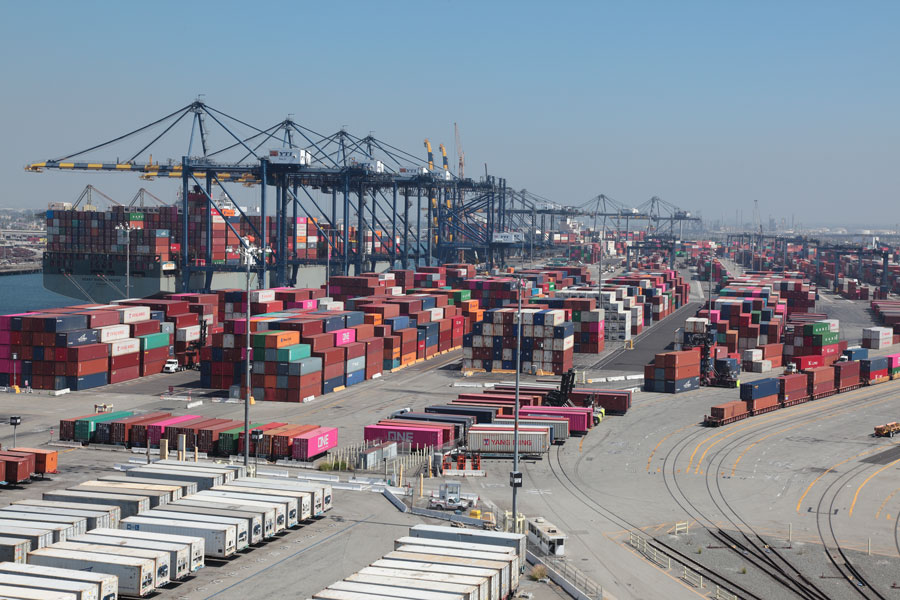 LOS ANGELES, CA – With over 80 container ships just sitting at the Long Beach and Los Angeles ports, I connected with Emily Hibard’s paper manufacturing family business, which was forced to sell their old trucks, which she attributes to being a major contributor to the supply chain fiasco due to truck shortages.

Growing up in poverty in Wisconsin, Emily’s grandfather and founder of the company, George Hibard moved to LA and started “Spiral Paper Tube & Core” in South Central in 1949. He successfully defended the business during the 1968 Watts riots. Emily was 12 during the height of the Bloods and Crips. During the 1992 Riots, she slept on a cardboard box on the roof and ran a garden hose to put out fires resulting from Molotov cocktails thrown at their business.

George never finished college, but learned the trade from reading on his own and soon married Helen, shortly after she immigrated from Guadalajara, Mexico, escaping and surviving the bloody Mexican Revolution. Helen shares the same heritage with many of the company’s 40-45 employees who are like family. George and Helen would procure any junk they could find, and machined, created, designed and fabricated a machine out of it, creating the first spiral paper tubes.

The company used to import paper and partially relied on the Long Beach port for raw materials but with the crisis, have pivoted to American intermediaries. Their customer base is rapidly expanding because they produce items that Americans can’t get through the port, such as paper canisters. Now businesses from all over the country are ordering from Hibard’s “Made in the USA” products to bypass imports and delays. But the transportation mandates still hit the core of their humble business.

Over the years, they had owned its share of junk trucks – mostly 26 foot bobtails, but some stake beds. George and son, George Jr would find them at their favorite junkyard on Imperial Highway in Downey, “Nicks New and Used” and would buy Junkers to ultimately fix the vehicles into running condition. That’s where they acquired their cherished but ugly 1984 blue Mack bobtail, which looked like it had been crashed into on all sides. But most importantly, it ran. A belt would break or the drive chain would get destroyed by debris on the 110 freeway, but they would fix it. The seat upholstery was ruined and the yellow foam and metal springs were exploding out, but the solution was a few strips of duct tape. Even the California DMV had no problem re-registering it year after year.

A few years ago, however, the EPA contacted their business and said that it was going to be illegal to use the unstoppable blue Mack truck because of new emission and idling standards. That was the bad news. But the good news, apparently, was that if they went out and bought fancy, new trucks for about $150,000, they would be able to stay in the EPA’s good graces. It was that easy, according to the government.

This is why the government is completely delusional:

The EPA forced Emily’s family business to sell all three of their perfectly fine, though admittedly ugly, trucks – two went down to Mexico and one went to Arizona, and to this day, they’re still running in those locales. The enterprising self-starter with little money will still get a chance in Mexico or Arizona, but California has now eliminated opportunity for the little guy who wants to break in the business and contribute to the industry.

Emily says, “The crisis at the Long Beach / LA port is self-inflicted but nowhere near surprising. Only the truck drivers who survived the EPA’s latest round of emissions regulations are still standing. What happens when we pair this skeleton crew of California drivers with the anti-automation, anti-efficiency, anti-technology longshoreman union at the ports? To see the answer, just stand on the beach and look out at the Pacific Ocean in Long Beach, Seal Beach, Sunset Beach, or Huntington Beach.”

The problem at the port is very solvable, the problem and the solution are political, and California lacks leadership with the heart, common sense or guts to fix it.

Why the retail industry is facing a bankruptcy wave

4 Stocks That Each Gained More Than 3.9% On Friday

A Review on Crust Network