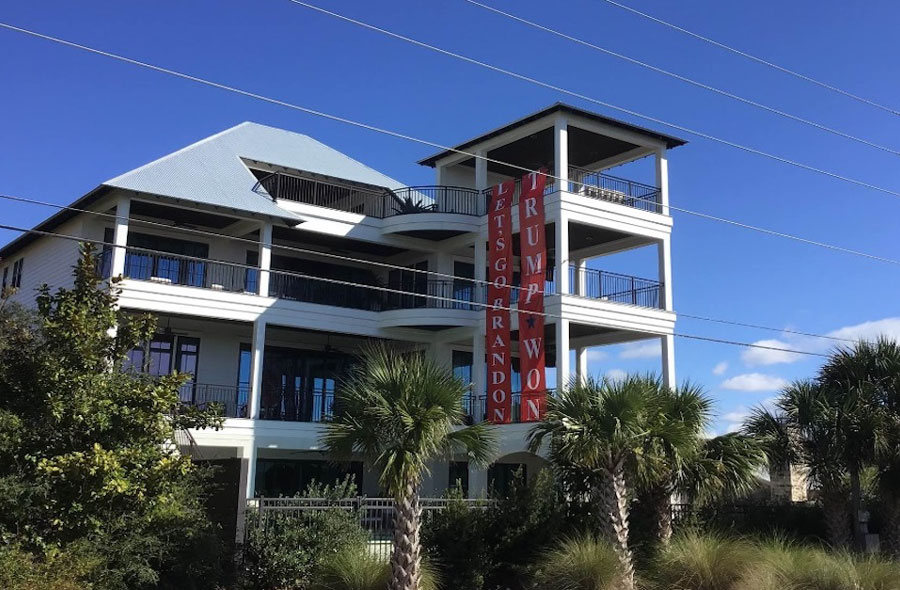 SEAGROVE BEACH, FL – A Florida man is being levied with daily fines for flying huge banners from his property that are critical of President Joe Biden and supportive of former President Donald Trump, but maintains that he will continue to display them as per his First Amendment right of free speech.

Echoing a recent situation in New Jersey where a woman displaying profanity-ridden Anti-Biden/Pro Trump signs on her yard, Marvin Peavy of Seagrove Beach has been displaying two three-story, red-and-white banners from his home – albeit minus the blatant profanity – that read “Trump Won” and “Let’s Go Brandon” since May.

“I’m here on the beach, and I got a lot of traffic, and people needed to see what I believe in,” Peavy said. “That’s free speech, and I wanted everyone to know that I’m a Republican and I’m supporting Donald Trump.”

“Let’s Go Brandon” is a phrase used by President Biden’s detractors to scorn him, inspired by an NBC reporter at a recent Alabama NASCAR race who heard the crowd chanting “F**k Joe Biden” but misinterpreted it as “Let’s Go Brandon,” believing that the fans were referring to race winner Brandon Brown.

Last month a hearing held by the South Walton community code enforcement found that the “Trump Won” banner had violated county land development codes governing the “visual aesthetics” of the beachside community in which Peavy lives, located along Florida’s panhandle.

As a result, Peavy is being issued a $50 daily fine until he removes the offending banners; however, he said that he is remaining steadfast and keeping them up, as per his right to free speech that he contends county officials are attempting to take away from him.

Peavy has noted that numerous supporters have offered to help him cover the daily fines, and that a woman in Louisiana has even offered to cover his fines for the next two years.

Peavy’s fines will be required to be paid at a hearing on November 17 if he has not removed them from his property by then. He had previously flown a “Trump 2020” flag from his home last year which was only allowed at the time because it was an election year.

Posher than England? US Wags show off at World Cup…