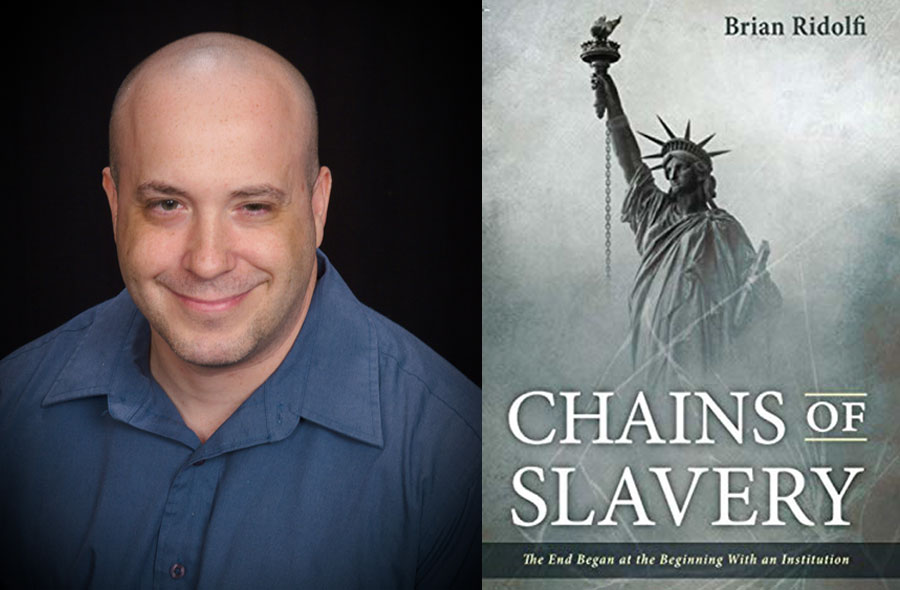 GREAT NECK, NY – If you’re searching for an enjoyable, relaxing and easy to digest book, which you hope will take your mind away from the current threats to our basic American freedoms posed by the leftist elite in the government, the mainstream media, universities and big tech, don’t read “Chains of Slavery.’’

Or at least that was my initial reaction after reading the futuristic political novel, whose author, Brian Ridolfi, I interviewed over the phone from my Long Island office to his in the outskirts of San Francisco, just a day after I finished reading his 166-page tome.

“‘Chains of Slavery”’ is not a book intended to help you fall asleep at night,” Ridolfi, 47, acknowledged. “Rather, it is a cautionary tale, intended to warn Americans, that, as President Reagan once said, ‘Freedom is a fragile thing, and it is never more than one generation away from extinction.”’

Ridolfi’s “cautionary tale” is set in a totalitarian socialistic America in the year 2048, eleven years after “America’s Second Revolution’’ of 2037 and centers on two main characters- Timothy Delgreco, the book’s narrator, a young man incarcerated in a federal penitentiary for the crime of stealing the food he needed to eat to avoid starvation in an impoverished socialist America, and Paul, a learned elderly man who was sentenced to the same prison for the crime of proselytizing Christianity.

The two quickly develop a teacher (Paul) – student- (Timothy) relationship, with Paul providing a previously historically uninformed Timothy, who as narrator chronicles their conversations, with an account of the circumstances surrounding America’s incremental transformation from a free nation into a totalitarian state.

As Ridolfi, paraphrasing a pivotal passage from his novel’s use of historical events to detail how the conjectural incremental death of American democracy took place, explained, “Just as you read in chapter two, Paul informs Timothy that slavery which started in Jamestown, Virginia in 1619, produced a chain of events that, some 418 years later, led, as I wrote through the words of Paul as told to Timothy, “‘Slavery for one group of people produced slavery for all people.”’

Next, starting with the Declaration of Independence in 1776 to the conclusion in 2016 of what is described as the centralized, welfare state driven two-term Obama presidency, Paul provides Timothy with a historically accurate overview of a series of the sequential seminal events, which, as developed in the novel, precipitated the end of American democracy.

Included in the historical events cited by Paul that span the 240-year period of American history between 1776 and 2016 are the Civil War, the Depression of 1929, President Roosevelt’s New Deal, World War II, the Holocaust, The Cold War, President Johnson’s Great Society, The Civil Rights Movement, President Nixon and the Watergate scandal, the massive national debt, the rise of China into a global super power, the Islamic terrorist attacks of 9/11 and the subsequent, resulting wars in Iraq and Afghanistan.

Restating what I had inferred from his book, Ridolfi explained his purpose in providing that history, “While, of course,” he stated, “the Civil War and World War II were necessary and justifiably fought wars, and the Civil Rights Movement was both essential and long overdue, my intention was not to have Paul be the final authority of the wisdom of America’s many past domestic and foreign policy decisions, but rather to show how the unintended consequences of many of these policies inexorably led to the end of American democracy beginning in the year 2037.”

Still, beyond Paul’s often unsettling history lessons, there is, I learned from the author, a story within the story, describing how and when “Chains of Slavery” was written and later published that you (like me) might find even more unsettling, because portions of it proved to be prescient.

“I started writing “Chains of Slavery” in 2013, but because of other projects I was working on at the time, I wasn’t able to finish the first eight chapters until the early fall of 2016, during the final months of the Obama presidency and shortly before the presidential election,” Ridolfi explained.

“I resumed my work” Ridolfi, a linguist and biblical scholar, who has authored two well-received prior books, continued, “in 2017, during President Trump’s first year in office, and completed the final two chapters by the end of that year. However, I was not happy with the offers I had received from publishers. So I decided to wait until I found the right publisher.’’

In 2020, Ridolfi found that “right publisher,” named Resource Publications, and one year later, his by then already four- years earlier completed novel finally went to print. The timing could not have been more perfect for what turned out to be a book that foretold a series of major future events.

As Ridolfi noted, “I described in the final two chapters composed back in 2017 what I then imagined to be the fictional events leading to the fictional end of American democracy. I am no prophet, he added, “but by the time the book was finally published many of what I originally believed to be horrid fictional events had actually occurred between the time I finished the book [2017], and the year it was published [2021].”

Prophet or not, the distressing fictionalized future events that Ridolfi foretold in his book became agonizing facts in 2020 and 2021. Among several other predictions which have come to pass to date, Ridolfi prophetically wrote of widespread riots in major U.S. cities (page 130), mass-media bias that would lead to the election of a leftist president (page 131), and chaos fomented by tens of thousands of angry Americans who came to Washington D.C. to protest the results of a heavily contested and highly controversial presidential election (page 151).

While those predictions have unfortunately already come to pass, Ridolfi in his book also correctly foretells the occurrence of a currently unfolding national controversy.

As you might already have learned from the wide reporting by the print and broadcast media, the United States Attorney General Merrick Garland recently wrote a memorandum directing the FBI to combat what he described as a “spike in harassment, intimidation, and violence against school administrators, school board members, teachers and staff.’’

The directive was denounced by Garland’s many critics, inside and outside the Republican Party, as a frightful attempt to use federal law enforcement to intimidate the parents of students in grades K-12, who as a part of a growing national grassroots movement have begun to come in steadily rising numbers to their respective local public school board meetings to protest the increase in school violence, mask mandates and the teaching of critical race theory and transgenderism.

For Ridolfi, the plan to criminalize political dissent became an instance of déjà vu. “My first reaction,” recalled Ridolfi, “to Attorney General Garland’s plan to use federal law enforcement to try to suppress parent protesters from exercising their First Amendment Rights was that this couldn’t possibly be occurring in America, and then a moment later, I realized that I had actually foretold a not exact, but very similar themed scenario in my book.”

Ridolfi, eerily you might conclude, had done just that. Describing in his novel how America’s socialist government responded to citizens publicly protesting the failed policies of their leaders, Ridolfi wrote, “A week later on February 4th a bill was passed in the House. It was called the Protection of Property and Stability Act, or PPSA. The bill placed restrictions on the press and authorized the police to ban political meetings and demonstrations (page 130).”

If you subscribe to the old proverb “to be forewarned is to be forearmed,” I recommend that you read “‘Chains of Slavery,”’ – even, and maybe especially, if you are afraid that it will keep you up at night.

Most Important Specs When Choosing a Smartphone