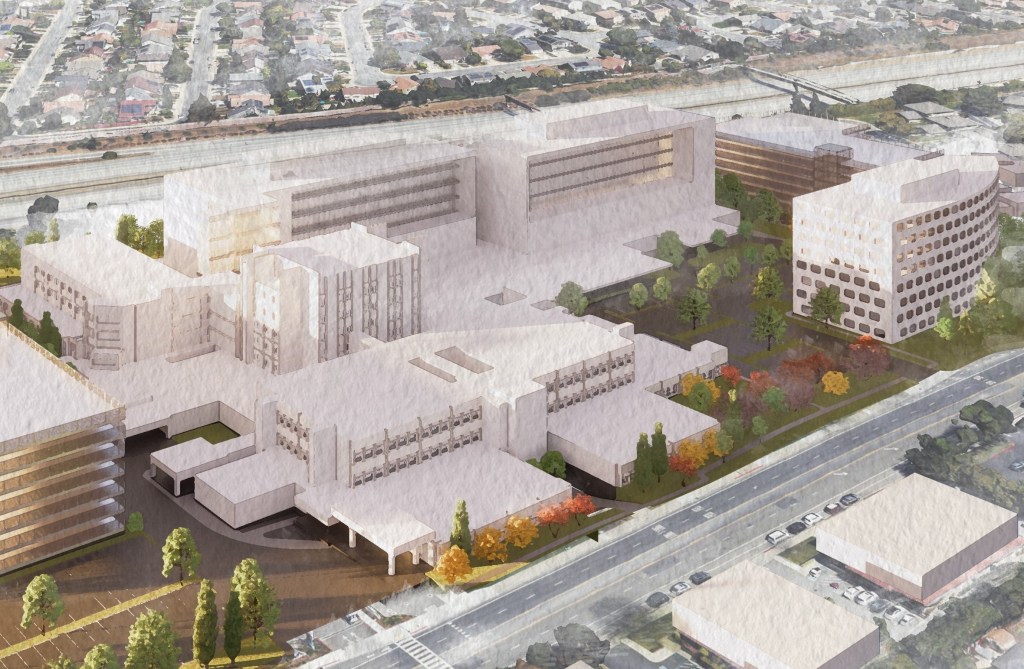 SAN JOSE — Good Samaritan is eyeing a big increase in hospital beds as part of its plan to triple the size of its existing healthcare campus in San Jose.

At present, Good Sam hospital accommodates 273 beds on the grounds of the healthcare organization’s campus at 2425 Samaritan Drive in southwest San Jose.

Once complete, the new campus would contain 419 beds, according to plans on file with San Jose city officials.

“HCA seeks a new planned development zoning to replace the existing zoning to address seismic retrofit requirements as required by Senate Bill 1953, to modernize hospital facilities and to improve access to comprehensive healthcare for the growing population,” Elizabeth Cobb, a senior project manager with Kimberly-Horn, a planning consultant for HCA for the hospital expansion.

The total building area at the future Good Samaritan medical complex would be slightly under 1.37 million square feet, compared with the current campus which totals 450,700 square feet, the city plans show.

That’s slightly more than three times the size of the existing campus, according to the plans filed by Good Samaritan Hospital, whose owner is Tennessee-based HCA Healthcare.

The project also envisions an interim size for the campus. In the interim phase, the Good Sam complex would total 378 beds and consist of 710,700 square feet.

Good Sam and HCA Healthcare want city officials to completely rezone the entire 21-acre site that accommodates the existing hospital as well as the future expansion buildings and parking facilities.

In its final phase, the project would add a medical office building totaling 200,000 square feet.

The expansion project is being undertaken largely to comply with the requirements of SB 1953 which obliges all hospital buildings to meet certain seismic safety requirements by a deadline.

Among other key changes that would arise from this proposal, once the expansion is complete:

“Reconfiguration of Good Samaritan Hospital needs to consider and evaluate expansion options of the diagnostic and treatment functions, new medical offices and backfilling the existing main hospital building with ancillary support services so as to provide for a comprehensive healthcare campus,” HCA and Good Sam stated in the planning documents.

The hospital rooms in the new main medical center are likely to be considerably larger than the existing rooms.

“Currently, Good Samaritan Hospital does not have any private patient rooms,” Good Sam and HCA stated in the planning documents. “Today, private patient rooms are the norm and are now recommended” in the Facility Guidelines Institute recommendations for the design and construction of healthcare facilities.

In addition to private and bigger rooms at hospitals, operating rooms, as well as diagnostic and treatment departments, have become larger, the planning documents stated.

“The project buildout condition would substantially maintain the existing buildings to the maximum extent possible,” HCA and Good Sam stated. “The project assumes growth will occur in phases so as to maintain the beds and facility operations without the downtime of critical services.”

The project’s initial phase would be the expansion of the diagnostic and treatment functions, and to shift some support services to the existing main hospital building, the planning documents state.

Construction of the first phase of the expansion should be complete by 2029, according to the proposal.

“The proposed improvements are necessary to allow HCA to continue providing high-quality care to the community,” Cobb wrote in the project overview.

Denial of responsibility! Yours Bulletin is an automatic aggregator of the all world’s media. In each content, the hyperlink to the primary source is specified. All trademarks belong to their rightful owners, all materials to their authors. If you are the owner of the content and do not want us to publish your materials, please contact us by email – [email protected]. The content will be deleted within 24 hours.
buildcommercial real estatedevelopgood samaritanHealthcarehospitalmedicalreal estate
0
Share