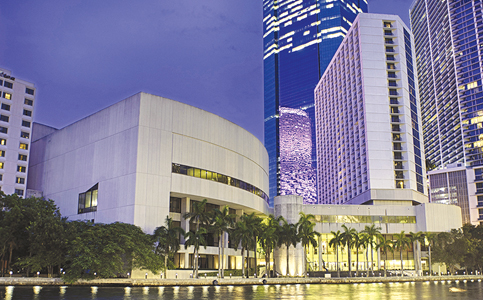 Plans to improve and redevelop a long-standing Hyatt hotel site on the Miami River in downtown Miami have been proposed for years but never realized.

That may change now that Hyatt intends to bring a new partner onboard.

The fate of the high-profile property owned by the City of Miami is scheduled to be considered by the city commission today (10/28).

On the agenda is a proposed resolution to authorize the city manager to consent to the assignment and assumption of the lease and agreement for development dated Sept. 13, 1979, between the city and Hyatt Equities LLC to HRM Owner LLC.

The city owns the real property at 400 SE Second Ave. on the north side of the river, adjacent to the Brickell Avenue Bridge. Hyatt Equities LLC leases from the city part of the site and operates the Hyatt Regency Miami Hotel there.

More than three years have passed since the last serious move by Hyatt to alter its lease and move to improve the property.

The city owns the 4.2-acre riverfront site on Second Avenue, home to a Hyatt hotel and the James L. Knight Convention Center.

In 2018, Hyatt Equities LLC wanted an extended lease to build a new Hyatt Regency hotel and two residential towers, a plan that included demolishing the convention center. But Hyatt officials met some resistance as city commissioners pushed for a better offer.

Time ran out in the summer of 2018 and the matter never made it onto a city ballot, required by charter for lease of city-owned waterfront properties.

Officials in the city’s Department of Real Estate and Asset Management (DREAM) reported then that it was Hyatt that pulled the item from consideration.

“The item was pulled by Hyatt so that Hyatt could continue to work on plans, with their architect, and work on the actual lease agreement, and the development process (including their own selection process for a developer, a formal development order, an operating agreement with their future development partner, etc.),” said city representatives.

Today’s background memo says Hyatt desires to assign its interest in the lease to a new entity, HRM Owner LLC.

The joint venture document says, “Hyatt Equities is seeking to redevelop the hotel and the convention center into a world-class, mixed use project which will include one or more high-end, Hyatt branded hotels, and potentially multi-family housing and/or retail components, such components to be determined.

“After discussions with several potential developers, Hyatt has selected the Miami based investment firm, Gencom.”

The resolution says the city, as part of its due diligence, “requested to review certain necessary documents pertaining to the underlying transactions between Tenant and Assignee, and both Tenant and Assignee have provided copies of redacted versions for the City to review but not retain in its records because Tenant and Assignee assert the documents fall within the definition of ‘Trade Secret’ pursuant to (state law) and are therefore confidential and exempt from disclosure.”

The biggest hurdle in the American supply chain: not enough truckers.