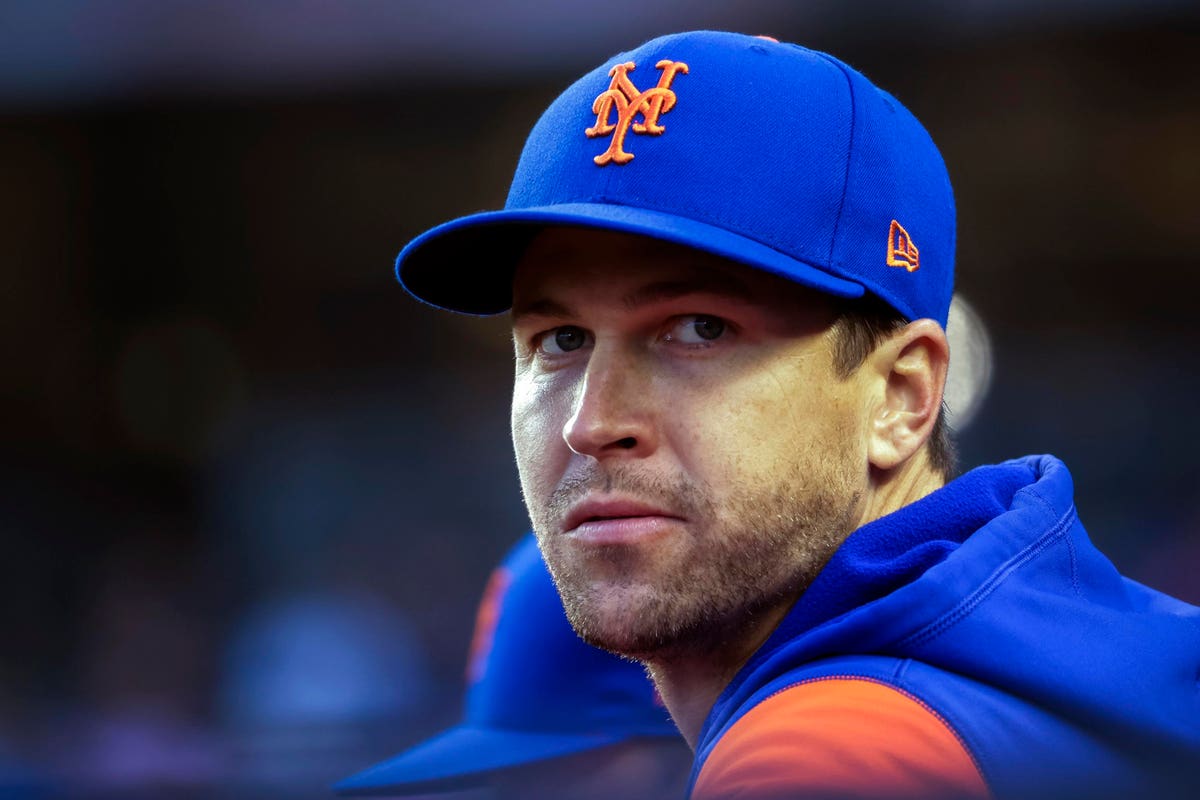 The Texas Rangers have a free agent contract deal in place with right-handed pitcher Jacob deGrom, one of Major League Baseball’s most prominent starting pitchers.

After pitching his entire big league career with the New York Mets, deGrom became a free agent after this past season.

The Rangers signed deGrom, 34, to a five-year, guaranteed contract worth $185M. The deal also includes a full no-trade clause and a conditional option for the 2028 season. If that option is exercised, deGrom’s contract value will be $222M.

“We are thrilled that Jacob deGrom has decided to become a Texas Ranger” stated Rangers general manager, Chris Young.

According to MLB.com, the Mets did not put a “best and final” offer in front of deGrom.

The signing of deGrom does not come without risk.

Arm and elbow injuries have been part of deGrom’s professional career.

In the 2021 season, deGrom missed time on the mound due to tightness in his forearm and a return of soreness in his surgically repaired elbow. No structural damage to his elbow was found in his Magnetic resonance imaging test.

Last season during spring training, deGrom suffered a stress reaction, the precursor to a stress fracture, in his right scapula (shoulder blade). He missed the start of the season, making his season debut on August 2.

As “The Insurance Journal” has noted, “insurance policies to cover multi-year, multi-million dollar salaries of professional baseball players may soon be as hard to locate as a split-fingered fastball from a southpaw relief pitcher.”

But for some teams, the peace of mind of even a high-cost insurance policy is well worth the search and price of the policy.

In 2016, for example, it was not uncommon for an insurance premium to cost as much as 7-10% of the value of the player’s contract, depending upon the length of the contract period and particulars of the policy.

Insurance policies vary widely. Some contracts don’t cover the first or last years of a player’s contract, leaving a void and vulnerability for the club.

In deGrom’s case, the Rangers have likely completed a thorough risk/reward evaluation, determining that the ability of deGrom on the mound, and what he brings to their pitching staff outweigh the risk of injury.

The New York Mets selected deGrom in the 9th round of the 2010 June Amateur Draft out of Stetson University in DeLand, Florida.

The Mets gave deGrom a $95,000 signing bonus. His Tommy John surgery took place a few months after he signed his contract.

After parts of 6 seasons in the Mets minor league development program, deGrom made his major league debut in 2014, at the age of 26. He had already reached full physical maturity, and was entering his prime baseball years.

For his stellar 2014 season, deGrom was named the National League Rookie of the Year.

It stands to reason that pitchers tend to lose velocity as they age. That has not been the case with deGrom. It is deGrom’s incredible and consistent velocity that sets up the other pitches in his repertoire.

His increase in velocity and his ability to pitch up in the zone when ahead in the count, are factors that have resulted in the tremendous success deGrom has enjoyed.

The difference in velocity and the spin rates on his breaking balls help keep hitters off balance and guessing about which pitch is coming. A master at changing the eye level of the hitter, deGrom has a knack for elevating his fastball the closer he gets to the third strike in an at-bat.

Using his fastball at a rate of 52%, his slider 38% of the time, and then mixing in his changeup on 8% of his pitches, and his curve 2% of the time, a hitter has to be prepared to see any pitch in deGrom’s arsenal at any point in the count.

In parts of 9 seasons with the Mets, deGrom leaves with a record of 82-57 in 209 starts. He has thrown to an eye-popping 2.52 career Earned Run Average, and a 0.99 career WHIP (walks and hits per innings pitched).

This past season, due to his early season injuries, deGrom threw only 64.1 innings. He finished with a 5-4 record in 11 starts. His 3.08 Earned Run Average was the highest of his career. He struck out an average of 14.3 hitters per 9 innings, equaling his career best from his 2021 season.

Jacob deGrom has been a National League All Star four times, the most recent being in 2021.

In 2018, All Star Jacob deGrom threw to a 1.70 Earned Run Average in 32 starts covering 217 innings, the most of his career. He won the National League Cy Young Award.

In 2019, All Star Jacob deGrom struck out 255 hitters, and once again, won the National League Cy Young Award.

What Makes deGrom So Good?

For this scout, there are several factors that helped earn Jacob deGrom his massive new contract with the Texas Rangers.

1-Few, if any pitchers can consistently hit 99 miles per hour with their four-seam fastball.

2-Few, if any pitchers can command and control their entire repertoire with the skill of deGrom.

3-Few, if any pitchers can keep a hitter off balance and guessing about the next pitch with the skill and confidence of deGrom.

4-Few, if any pitchers can keep the ball down in the zone and then elevate pitches sequentially with the skill and accuracy of deGrom.

5-Few, if any pitchers attack the hitter with such an effortless and dominant mound demeanor as deGrom.

In June of 2021, Major League Baseball began cracking down on MLB pitchers using foreign substances to “doctor” the baseball. MLB used the term “sticky stuff” to describe substances pitchers put on their fingers to gain greater spin and late movement on their pitches.

Some pitchers were said to have used what was called Spider Tack, an industrial glue type substance, among other substances to improve their grip on the baseball.

One of the pitchers commonly mentioned to have been using “sticky stuff” was deGrom.

In fact, his spin rate decreased from 2,500 rpm on his fastball to 2,350 rpm after umpires began checking for foreign substances on the gloves, the hands, the caps, the belts and the uniforms of pitchers when they left the mound.

Be that as it may, deGrom has proven repeatedly that he doesn’t need a foreign substance to dominate hitters. He just needs a sound arm, elbow and shoulder. He just needs his normal repertoire and confidence.

Jacob deGrom, who some feel is the best starting pitcher in baseball, has signed a five-year contract with the Texas Rangers.

Of importance in the transaction is the fact that deGrom will be pitching for new Rangers manager, Bruce Bochy.

To this scout, Bochy is among the best, if not the best, handler of pitchers of any manager in the game.

A four-time All Star and two-time Cy Young Award winner, Jacob deGrom will begin his 10th year as a big league pitcher. He will also be changing leagues, going from the New York Mets to the Rangers.

Given his arm and elbow injuries from the past, there is some risk involved with the length of deGrom’s new contract.

Based on their need for a true “ace” for their rotation, and given their desire to climb in the American League standings to a competitive level, the rewards of adding Jacob deGrom to their roster could far outweigh the risk that he may get injured.

Denial of responsibility! Yours Bulletin is an automatic aggregator of the all world’s media. In each content, the hyperlink to the primary source is specified. All trademarks belong to their rightful owners, all materials to their authors. If you are the owner of the content and do not want us to publish your materials, please contact us by email – [email protected]. The content will be deleted within 24 hours.
deGromMajor League Baseballnew york metsTexas RangersTommy John surgery
0
Share