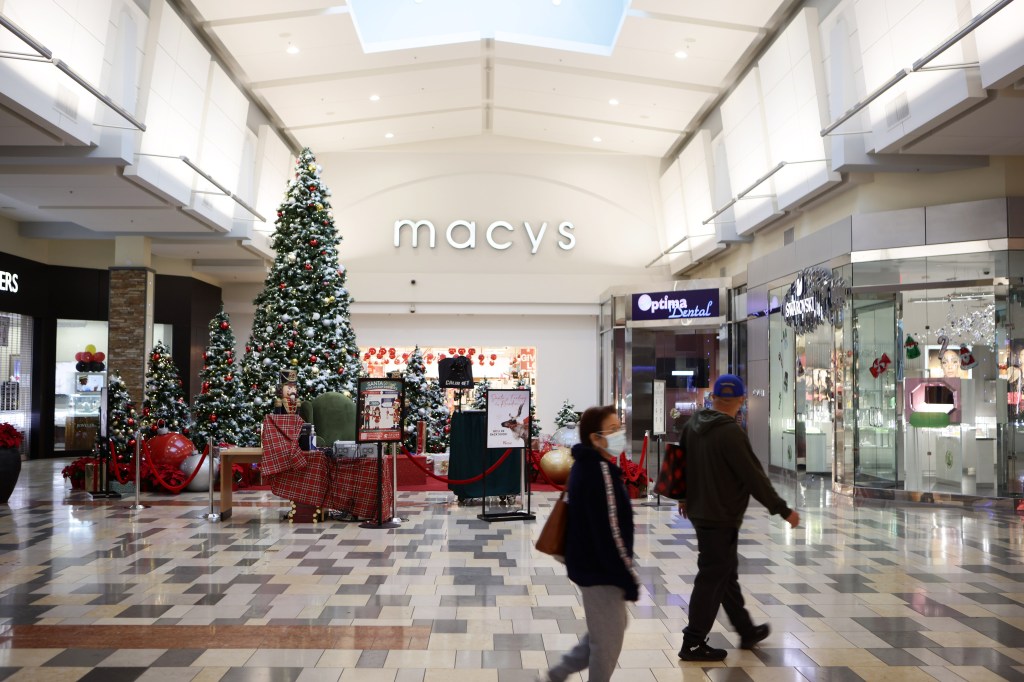 Retail analysts are predicting record-setting sales from in-store and online holiday shopping this season, but the crowds didn’t get an early start in some of the oft-busy retail corners of the Bay Area.

At the Westfield Oakridge shopping mall in San Jose, the number of shoppers could be counted in the dozens rather than the hundreds just after 7 a.m. Friday, when the stores first opened. Parking was plentiful, and the only line that had formed was a gathering of eight or so people waiting to get into a GameStop before it opened its doors.

Patricia DiSilva and Hannah Arrington were two of those people waiting to get into the GameStop before doors opened, and the lack of a crowd surprised them.

They live nearby and walked to the mall in order to avoid what they assumed would be a crowded parking lot.

“We were trying to beat the traffic,” Arrington said.

“But there was no traffic to beat,” DiSilva continued. “We were expecting more people.”

Malls in the East Bay were quiet, too, with no early crowds at the Sunvalley Shopping Center in Concord.

It’s a departure from scenes years ago when crowds gathered overnight leading up to Black Friday to storm into retailers for “doorbuster deals” and waded through throngs of other shoppers to scope out big deals. It’s an online world these days, and many of the deals people seek are available online throughout the holiday season — not just Black Friday.

Despite lower COVID-19 rates and the presence of the vaccine over last year’s shopping season, people still may be wary of rushing into huge retail crowds, Kirthi Kalyanam, director of Santa Clara University’s Retail Management Institute, said this week.

“I don’t think people are as comfortable doing that (since the pandemic),” Kalyanam said.

Still, experts were predicting the sales to be strong, and said stores would see some crowds throughout the day and the weekend.

“While we don’t expect to see a rush to the doors on Black Friday, we do anticipate healthy crowds as our guests celebrate the return of this festive time of year,” Karen Strack, senior vice president of customer and brand marketing at Unibail-Rodamco-Westfield, said earlier this week.

Consumers spent $5.1 billion on Thanksgiving and are expected to spend between $8.8 billion and $9.6 billion on Black Friday, according to the Adobe Digital Economy Index, which analyzes direct consumer transactions online.

Thanksgiving spending was at the low end of what Adobe predicted as the range for online spending, between $5.1 billion and $5.4 billion dollars, but it was still an uptick over average daily spending.

For the whole holiday shopping season stretching from Nov. 1 to Dec. 31, Adobe analysts still predict that online sales will hit $207 billion, a 10% increase over last year and a new record.

Another factor that may be limiting crowd sizes? People are using retailers’ curbside pickup options, which became popular in particular during the pandemic. On Thanksgiving Day, curbside pickup was used in 21% of all online orders  among retailers who offer that service, according to Adobe, which expected a similar number of consumers to do that on Black Friday.

Local retailers say they believe people have started on their shopping earlier this year, which they were urged to do as supply chain issues threatened delays in goods arriving in time for Christmas.

Wincor has talked with a lot of customers in recent weeks, she said, and “all of them spoke about getting ahead on the holiday shopping.”

And even if they’re not out early, retail industry predictions note that people will show up in stores this weekend. The International Council of Shopping Centers said 85%of shoppers plan to spend money in physical stores this year, according to its survey of shoppers.

According to the National Retail Federation, about 2 in 3 Americans plan to shop during the Thanksgiving weekend.

The group predicted last month that holiday sales — from both online and in-person shopping — during November and December would grow between 8.5% and 10.5% over 2020, to between $843.4 billion and $859 billion. That number excludes sales at car dealers, gas stations and restaurants. In 2020, holiday sales increased 8.2% to $777.3 billion — a higher growth than the average increase of 4.4% each year over the last five years.