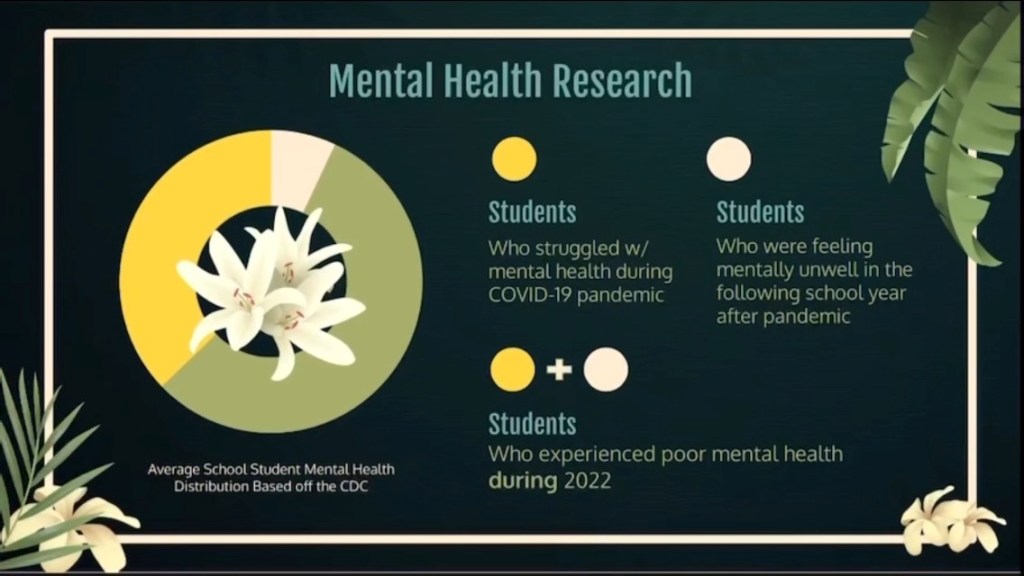 TramAhn Nguyen, Tiffany Hyde, Lauren Le and Jason Rojas Pacheco developed Azalea, an augmented reality game designed for students who struggle with mental illnesses like obsessive compulsive disorder or anxiety, or who just feel stressed in general. Working as Tangoe Games, Inc., the quartet of students designed the game around the azalea flower, which symbolizes healing.

The gardening game is intended to provide a relaxing experience that allows users to channel their emotions into healthy cultivation. Azalea also offers users coping techniques, like reminders to drink water or stretch, as they tend their virtual gardens.

“The peaceful scenery is meant to calm the user and reduce stress,” the students explain in their video submission to the KnoPro Technology Inclusion Challenge. “They’re meant to feel safe and comfortable while playing. … Players will be encouraged to go outside and explore the outdoors in order to grow their own garden.”

The Azalea team took home $2,000 cash from the challenge, hosted by the nonprofit NAF and KnoPro, NAF’s free, web-based platform where students can tackle real-world problems and compete to win large cash prizes and scholarships.

Co-developed with Lenovo, the Technology Inclusion Challenge tasked students age 13 and older with pitching an innovative product idea that engages their peers who may experience underrepresentation in traditional education, including those with disabilities.

For the Azalea team, developing the app helped them cope with their own anxiety about the demands of high school academics.

“I’m so tired every day, and I want to put effort into school, but I’m so stressed and don’t know how to stop,” one team member says in the video. “My grades are so low, and I feel so helpless.”

Team members say the app was designed for high school students who are struggling with mental health issues to get “the help they need and deserve.”

“We wanted an app that can be used as an outlet for stress and also encourages healthy ways for people to deal with mental health issues,” says one team member in the video.

Data from the CDC highlights the need for such an outlet. In 2022 the CDC reported that 44 percent of high school students it surveyed said they’d struggled with mental health during the pandemic or were feeling mentally unwell during the following school year.

“An app like Azalea could bring the positive impact students need,” says one team member.

After conversion row, UP university faces another controversy — 2 held for swindling…