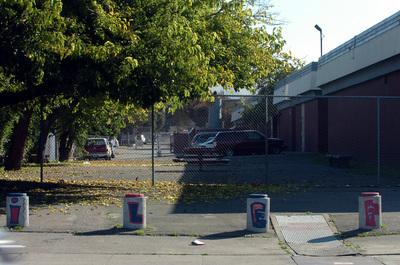 RICHMOND — Hundreds of students at Richmond High walked out of their classes Tuesday afternoon to protest action taken against a substitute teacher involved in a physical confrontation with a student.

The walkout was confirmed by Lorenzo Morotti, a journalism teacher at the school. It occurred before fifth-period classes.

BREAKING: “We stop. You stop,” Richmond High School BSU Director Kiraa Easter said to start off a walkout rally. 100s of students stand in solidarity against using racial slurs in response to a Black substitute teacher attacking a Latino student for using a racial slur in class. pic.twitter.com/QBD9AzzfnP

The school became the center of attention when a video emerged Monday night showing the teacher putting his hands on a student and throwing him to the ground earlier Monday. The teacher has not been identified publicly.

The teacher was terminated from employment with the West Contra Costa Unified School District, according to a statement. A anonymous flyer at the school, also seen on social media, indicated he was a coach at the school.

“The West Contra Costa Unified School District is aware of an incident between a student and a substitute teacher that occurred at Richmond High,” district spokesperson Liz Sanders said in the statement. “The student is safe with family, and our school district are fully investigating the incident. The district has taken swift action, and the staff member has been released from employment with WCCUSD.”

That decision apparently didn’t sit well with some students, who claimed the teacher snapped after being called a racial slur. The flyer announcing the student walkout read: “We tired of the racial slurs. We fed up. The actions he took wasn’t right but the kid actions also wasn’t.”

The school’s black student union, in a statement obtained by the Bay Area News Group, said the teacher was involved in the football program and that he reacted after the slur. The statement said the slur came from a Hispanic student.

The teacher shook the student, threw him to the ground, then shoved the boy out of the classroom after he got up, according to the statement.

“Even though the teacher has all the eyes on him because he is an adult and should have handled it differently, at the end of the day they were both disrespectful, and either one could have walked away,” the statement said. “But … someone who is not black saying such a hateful word is wrong and should be held accountable for his actions. Not only should the teacher be removed, but the student as well.”

The district did not respond immediately to questions posed Tuesday afternoon about the protest. Richmond police have not said whether they are investigating the incident as a criminal matter.

This is a developing story. Please check back for updates.

Denial of responsibility! Yours Bulletin is an automatic aggregator of the all world’s media. In each content, the hyperlink to the primary source is specified. All trademarks belong to their rightful owners, all materials to their authors. If you are the owner of the content and do not want us to publish your materials, please contact us by email – [email protected]. The content will be deleted within 24 hours.
firedphysical confrontationprotestRichmond HighStudentssubstitute teacher
0
Share

From Starbucks to stardom, James Martin on his Oscar nomination – Channel 4 News

After conversion row, UP university faces another controversy — 2 held for swindling…