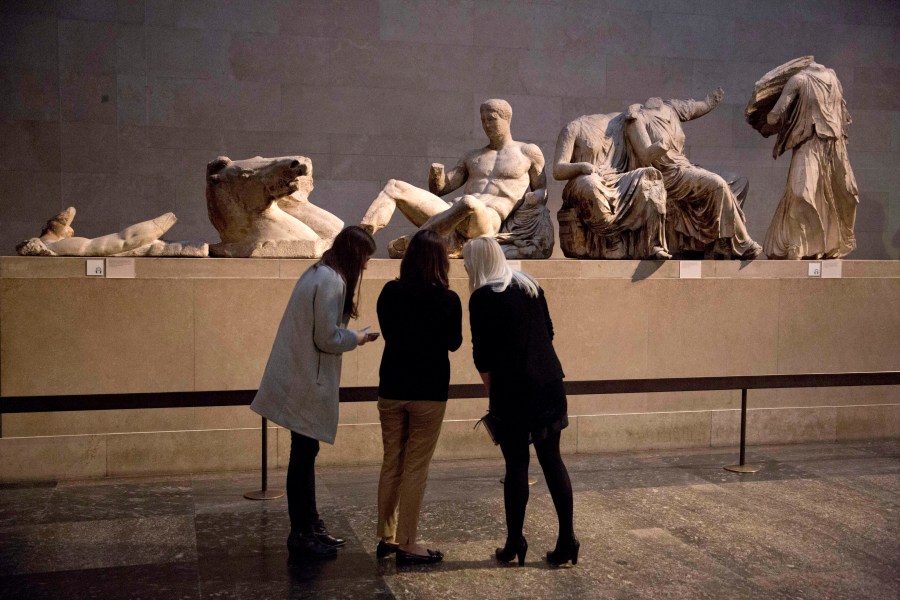 ATHENS, Greece (AP) — Cabinet ministers from Greece and the U.K. discussed Greece’s bid to get the Parthenon Sculptures returned from London but gave no sign the world’s thorniest cultural heritage issue was any closer to resolution Tuesday.

Greek Alternate Foreign Minister Miltiadis Varvitsiotis said he told U.K. Parliamentary Under Secretary of State for Europe Leo Docherty that Athens seeks a “win-win” solution with the British Museum, where ancient Greek marble works that originally decorated the Parthenon Temple on the Acropolis are displayed.

The talks in Athens also touched on other bilateral and European issues. They came days after a Greek newspaper reported the British Museum’s chairperson held secret discussions with Greece’s prime minister about the return of the 5th century B.C. sculptures in the museum’s collection. The rest of the surviving works are in the Acropolis Museum in Athens.

A Greek Foreign Ministry statement quoted Varvitsiotis as telling Docherty that “contemporary reality demands the reunification of the Parthenon Sculptures.”

The ministry said Docherty stressed that the matter concerns the British Museum, rather than the U.K. government.

While the museum didn’t deny talks have taken place, a spokesperson refused to discuss the specifics of Saturday’s story in Greek newspaper Ta Nea.

The works now in London — also known as the Elgin Marbles — were removed in the early 19th century by a British diplomat, Lord Elgin. At the time, Greece was under Ottoman Turkish occupation.

Athens argues the sculptures were taken illegally and should be returned for permanent display beside those still in Greece. The British Museum rejects that stance, despite indications that U.K. public opinion favors the decades-old Greek demand.