India at Oscars: ‘Naatu, Naatu’ from ‘RRR’, documentaries ‘All That Breathes’ and ‘Elephant Whisperers’ earn nominations : The Tribune India 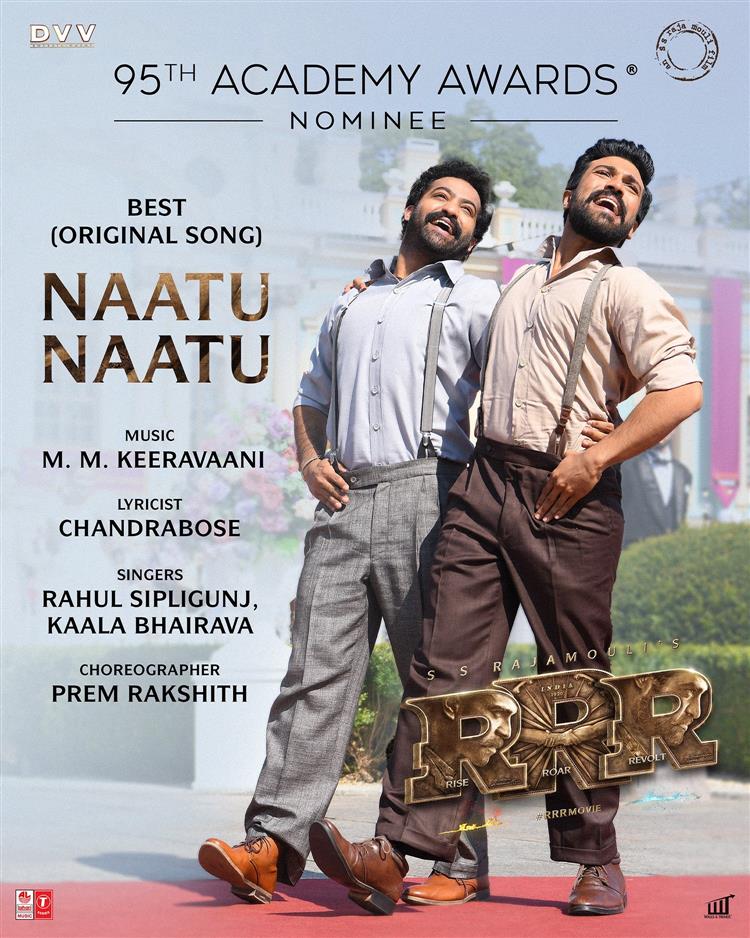 “Naatu Naatu”, the hit dance track from SS Rajamouli’s blockbuster “RRR”, on Tuesday continued its winning march by earning a coveted nomination for the Original Song at the Oscars 2023 where Indian documentaries “All That Breathes” and “Elephant Whisperers” walked away with nods in Documentary Feature and Documentary Short categories.

“The Last Show”, India’s official entry in the International Feature category, however, failed to make the cut in the final five, but there was much to celebrate as it is perhaps for the first time that three films from the country are competing in different segments.

“Naatu Naatu” will compete with ‘Applause’ from “Tell It Like a Woman”, ‘Hold My Hand’ from “Top Gun: Maverick”, “Lift Me Up’ from “Black Panther: Wakanda Forever” and ‘This Is a Life’ from “Everything Everywhere All at Once”.

The song, filmed on Ram Charan and Jr NTR, translates to bucolic in Telugu and demonstrates the spirit of fun in country music over 4.35 breathless minutes of song and dance.

Composed by MM Keeravani and choreographed by Prem Rakshith, it has legions of followers on social media trying to master its steps.

“WE CREATED HISTORY!! Proud and privileged to share that #NaatuNaatu has been nominated for Best Original song at the 95th Academy Awards,” the film’s official Twitter handle posted.

Keeravani shared his excitement over the nomination on Twitter.

“Congratulations to my team !! Big hugs to all,” Keeravani tweeted.

Rajamouli’s father and the film’s screenwriter V Vijayendra Prasad told PTI that it was a “proud moment for India.

This is the third major international recognition for “Naatu Naatu”, sung by Kala Bhairava and Rahul Sipligunj, after Keeravani won a Golden Globe as well as a Critics Choice award for the track earlier this month. The film won another Critics Choice award—Best Foreign Language Film.

“All That Breathes”, which is competing for an Oscar alongside “All the Beauty and the Bloodshed”, “Fire of Love”, “A House Made of Splinters” and “Navalny”, has also emerged as one of the best documentaries this year.

“All That Breathes” is also nominated for a BAFTA Award. It previously won the ‘World Cinema Grand Jury Prize: Documentary’ at this year’s Sundance Film Festival, a film gala that promotes independent cinema and filmmakers, and earned the Golden Eye award for the best documentary at the 2022 Cannes Film Festival.

Sharing his joy, Sen said he was “a bit lost for words” at the moment.

“It’s feeling extraordinarily difficult to say something that doesn’t sound like a cliche. We’re utterly besides ourselves with joy and a bit lost for words at this moment. Utterly relieved, happy and somewhat discombobulated. I want to offer my deepest, most heartfelt thanks to our incredible characters and the whole film team and I am grateful to the Academy for recognising their work,” Sen said in a message to PTI.

Tamil documentary “The Elephant Whisperers”, an endearing story about the unbreakable bond between two abandoned elephants and their caretakers, is nominated in the Documentary Short Subject category at the Oscars where it will compete with “Haulout”, “How Do You Measure a Year?”, “The Martha Mitchell Effect” and “Stranger at the Gate”.

“It’s such an honour to have an Indian Indigenous documentary from the heart of South India acknowledged across the world. Thank you, members of the Academy for nominating The Elephant Whisperers,” director Kartiki Gonsalves said in a statement.

The Netflix documentary is produced by Guneet Monga and Achin Jain of Sikhya Entertainment. Monga was also the producer of “Period”.

“Today’s nomination strengthens my faith in stories with heart and people who tirelessly submit themselves to a larger vision… It is the innocence and honesty that transcended these boundaries and made The Elephant Whisperers travel from a small quaint town of Ooty to the biggest stage of Cinema!” Monga tweeted.

The producer also shared her joy over “RRR” and “All That Breathes” nominations.

“This journey has also been about the representation and making our country proud. So here’s to India, and here’s to all of us…. RRR and All That Breathes. OMG! This is for INDIA,” Monga tweeted.

The nominations for 23 categories of the 95th Academy Awards were announced by Hollywood actors Riz Ahmed and Allison Williams here.

The 95th Oscars will be held on March 12 at the Dolby Theatre at Ovation Hollywood.

‘We’re trying to connect’: black hip hop artists in Hong Kong reach out to home-grown acts through their events company

How Much Will This Ford Bronco Raptor With No Reserve Sell For?