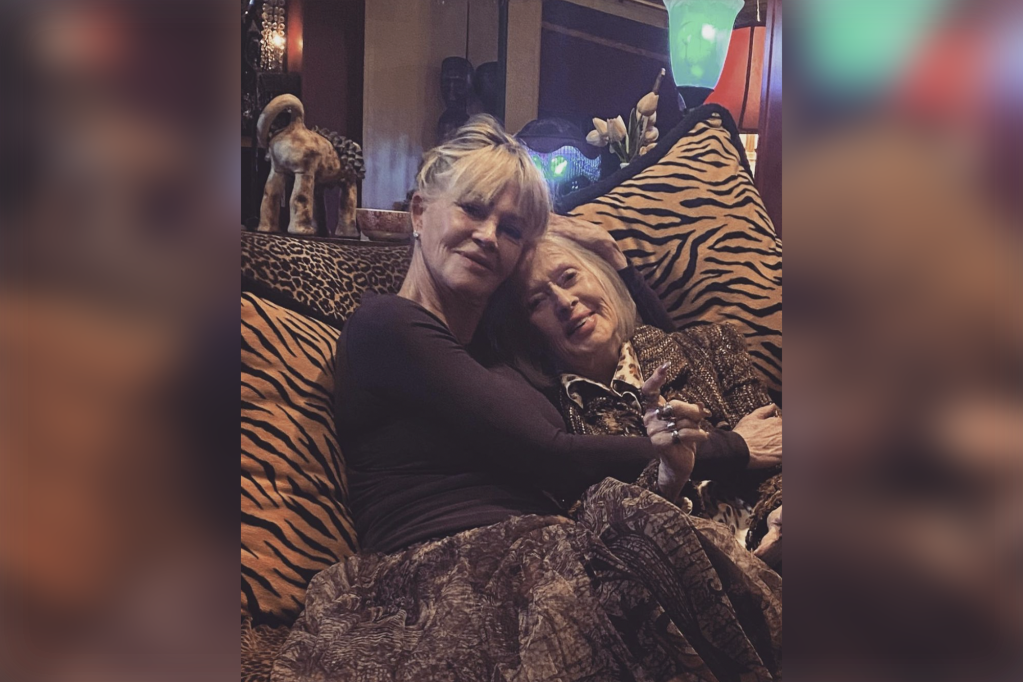 Melanie Griffith expressed her gratitude for her mother Tippi Hedren with a sweet Instagram post after the Thanksgiving holiday weekend.

On Monday, the 65-year-old actress shared a photo in which she was seen hugging the 92-year-old “Marnie” star as the pair beamed at the camera.

“Thankful that my Mom is still here with us,” Griffith captioned the heartwarming image, adding a black heart emoji.

In the snap, the mother-daughter duo were cuddled up on a leopard-print couch with tiger stripe throw pillows.

Hedren is a longtime big cat enthusiast who has rescued dozens upon dozens of endangered felines over the years.

She first worked with lions, tigers and other big cats in the 1981 film “Roar,” which has been described as one of the most dangerous movies ever made.

In 1983, Hedren founded the Roar Foundation non-profit and established the Shambala Preserve sanctuary in Acton, California to house 100 lions and other big cats that were featured in the movie.

During a 2020 appearance on “The Graham Norton Show,” Hedren’s granddaughter Dakota Johnson confirmed that “The Birds” actress is still living with several big cats at Shambala.

The “50 Shades of Grey” actress is the daughter of Griffith and Don Johnson, 72.  The Academy Award nominee and the “Miami Vice” alum were married for six months in 1976.  They tied the knot again in 1989 but went on to divorce in 1994.

The “Working Girl” actress and Banderas, 62, are parents to daughter Stella, 26. The former couple split after 18 years of marriage in 2015.

Griffith remains on good terms with all of her ex-spouses. In 2018, she told InStyle magazine, “All of my husbands, my three husbands — I love them all so much, and we’re all very close.”

Johnson and his wife Kelly Phleger were included in a carousel of photos from Griffith’s Thanksgiving celebrations that she shared on Monday.

“A bunch of family moments,” she captioned the slideshow. “Grateful for each one of them. Laughter, memories, and love.”

Denial of responsibility! Yours Bulletin is an automatic aggregator of the all world’s media. In each content, the hyperlink to the primary source is specified. All trademarks belong to their rightful owners, all materials to their authors. If you are the owner of the content and do not want us to publish your materials, please contact us by email – [email protected]. The content will be deleted within 24 hours.
EntertainmentMelanie Griffithtippi hedren
0
Share