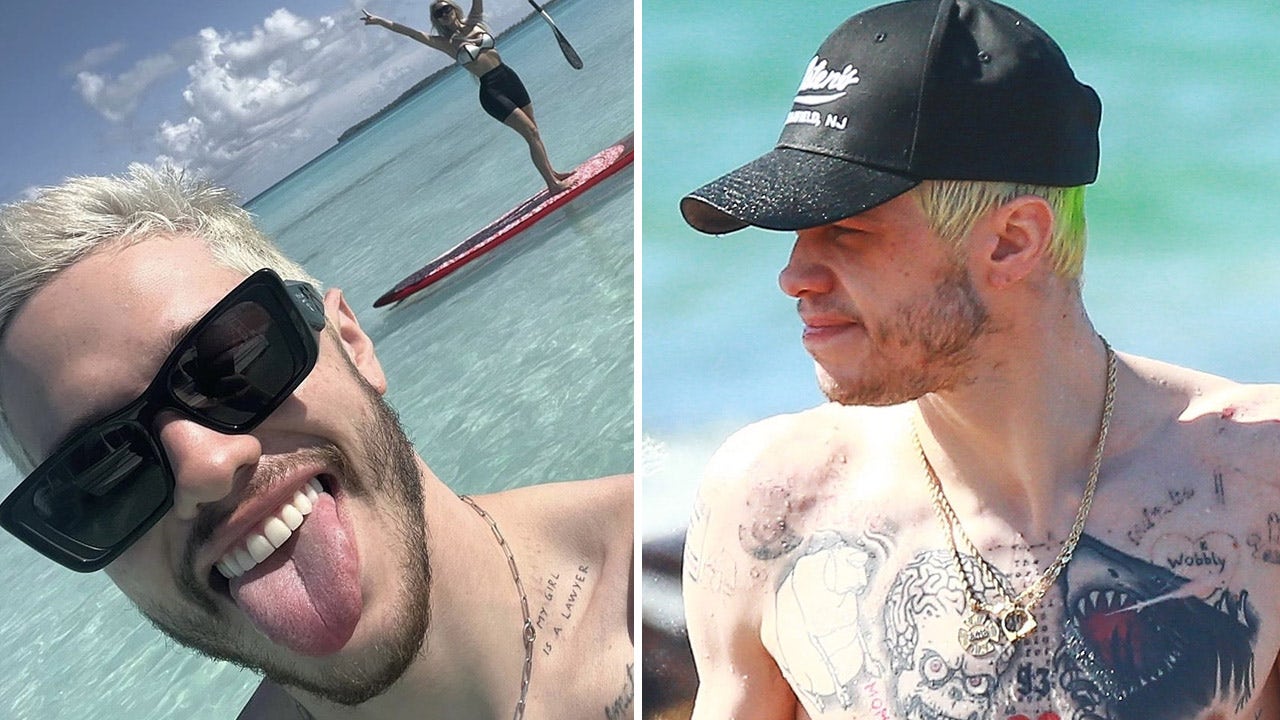 Across Pete Davidson’s chest are skulls, sea creatures, Ruth Bader Ginsburg and a plethora of other designs. The former “Saturday Night Live” actor has seemingly rid himself of one of his most famous tattoos – a tribute to his ex-girlfriend Kim Kardashian.

While vacationing in Hawaii with rumored new girlfriend Chase Sui Wonders, Davidson, 29, was pictured without his “My Girl Is A Lawyer” tattoo he had inked on his body, above his collarbone.

The tattoo, a nod to Kardashian’s studies to become a lawyer, was something Davidson got during their nine-month relationship.

Kardashian previously revealed on “The Ellen DeGeneres Show,” that while her beau had several tattoos in her honor, that one was her favorite.

Pete Davidson’s infamous “My Girl Is A Lawyer” has seemingly been removed.
(Instagram/TheImageDirect/Backgrid)

Davidson’s other tattoos for Kardashian included the names ‘Jasmine’ and ‘Aladdin’ – the characters they played in a “Saturday Night Live” sketch where they shared their first kiss. Fans could previously see that ink above his other collarbone.

On his lower neck, Davidson had cemented his love for Kardashian and her family, getting the first letter of her name as well as her four children’s, spelling “KNSCP,” to represent Kim, North, Saint, Chicago, and Psalm. Those letters are also no longer visible.

Kardashian previously told DeGeneres that her then-boyfriend had gotten “KIM” branded on his body as well, but this too appeared to be removed.

Davidson and Kardashian amicably split in August after a whirlwind romance.

After their split, Davidson reportedly rebounded with model Emily Ratajkowski.

Now, new photos have surfaced of him and 26-year-old Wonders, an actress best known for her roles in “Generation” and “Bodies Bodies Bodies.”

Upon closer examination of Pete Davidson’s neckline, the “My Girl Is A Lawyer” tattoo is no longer noticeable.
(TheImageDirect/Backgrid)

Davidson and Wonders hit the beach in Hawaii where they cozied up to one another in the water.

A representative for Davidson did not immediately return Fox News Digital’s request for comment.

Pete Davidson and Chase Sui Wonder walked alongside one another on the beach in Hawaii.
(TheImageDirect/Backgrid)

Davidson spoke with late-night host Seth Meyers in 2021, prior to his relationship with Kardashian, about his decision to have some of his tattoos removed, citing the arduous nature to cover them up on-set for various projects.

“It takes like 3 hours. You have to get there 3 hours earlier to cover all your tattoos, ’cause for some reason people in movies – they don’t have them that much.”

“So now I’m burning them off. But like, burning them off is like, worse than getting them. Because like, not only are they like, burning off your skin, but you’re like wearing these big goggles, right? So you can’t see anything. And… the doctor’s in there with you. So before he goes to laser each tattoo you have to hear him announce what the tattoo is, to make sure if you want to keep it or not,” he explained.