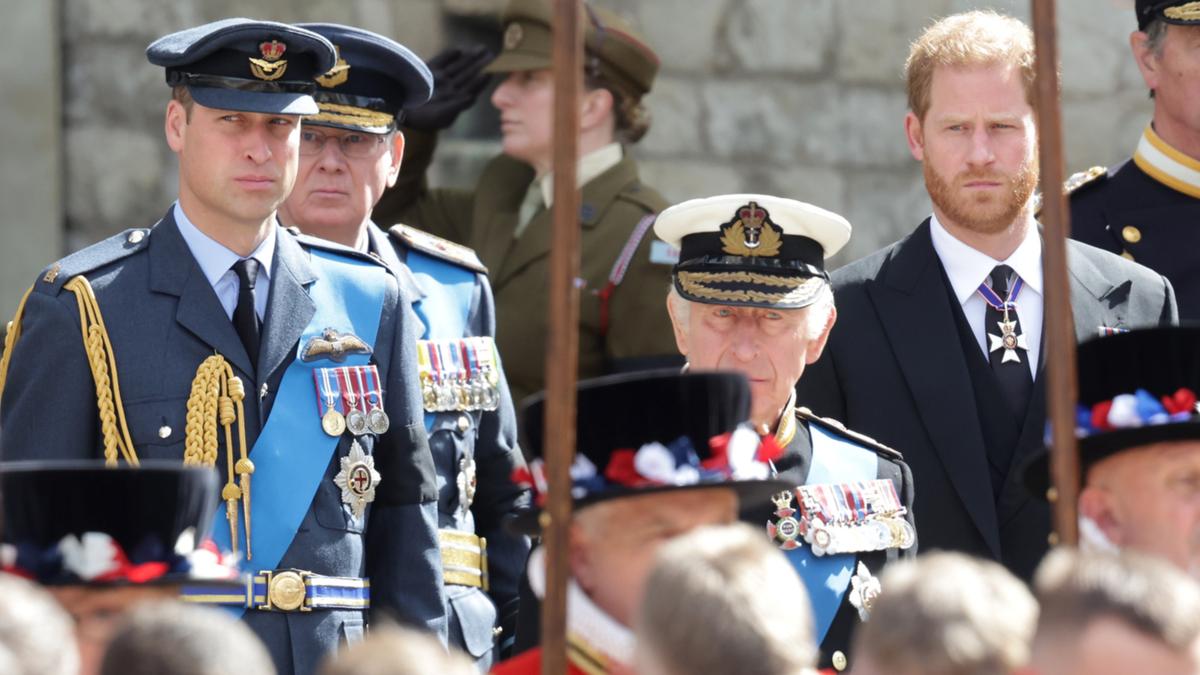 Prince Harry reportedly “ate separately in a different house” from his father King Charles and brother Prince William on the night of the Queen’s death.

Harry was furious after Charles is said to have told his youngest son it was “not appropriate” for his wife Meghan, Duchess of Sussex to accompany him.

WATCH THE VIDEO ABOVE: Harry, Meghan, William and Kate meet the public after Queen’s death.

When doctors expressed that they were “concerned” for the Queen’s health, family members rushed to Balmoral Castle in Scotland, with the Duke of Sussex being the last to arrive.

“Harry was so busy trying to get Meghan to Balmoral and rowing with his family that he missed the flight,” a source told The Sun.

“Charles has an open invitation for Harry to dine with him whenever he is in the country.

“But Harry was so furious that he refused to eat with his father and brother.

“It was a massive snub. And he got out of Balmoral at the earliest opportunity to catch the first commercial flight back to London.”

Harry arrived in Scotland solo – with a separate plane carrying other family members – as news of his grandmother’s death broke worldwide.

Once Harry arrived at Balmoral he reportedly stayed with Princess Anne, Prince Andrew and Prince Edward, and declined a dinner invitation from his father.

This dinner was at King Charles’ home Birkhall on the Balmoral Estate.

“Two dinners were being hosted on the royal estate that night and there was a clear divide,” the source told The Sun.

Harry was the first to leave the next day, departing at 9.45am on a flight back to London, where he reunited with Meghan at Frogmore Cottage in Windsor.

Despite these reports, William and his wife Catherine, Princess of Wales publicly extended an olive branch to Harry by inviting him and wife Meghan, Duchess of Sussex to greet crowds alongside them over the weekend.

The united front from the former “fab four” made headlines worldwide, as it was the first time they had been seen together publicly since 2020.

“Granny, while this final parting brings us great sadness, I am forever grateful for all of our first meetings – from my earliest childhood memories with you, to meeting you for the first time as my commander-in-chief, to the first moment you met my darling wife and hugged your beloved great-grandchildren,” he wrote.

“I cherish these times shared with you, and the many other special moments in between.

“You are already sorely missed, not just by us, but by the world over.

“And as it comes to first meetings, we now honour my father in his new role as King Charles III.”

Harry also paid tribute to the Queen’s ”commitment to service and duty”.

“She was globally admired and respected. Her unwavering grace and dignity remained true throughout her life and now her everlasting legacy,” he said.

“Thank you for your infectious smile.

“We, too, smile knowing that you and grandpa are reunited now, and both together in peace.”

He also made reference to the Queen’s own words when her husband Prince Philip died: “Life, of course, consists of final partings as well as first meetings”.

Denial of responsibility! Yours Bulletin is an automatic aggregator of the all world’s media. In each content, the hyperlink to the primary source is specified. All trademarks belong to their rightful owners, all materials to their authors. If you are the owner of the content and do not want us to publish your materials, please contact us by email – [email protected]. The content will be deleted within 24 hours.
duchess of sussexEntertainmentMeghan And HarryMeghan Markle [Meghanprince harryQueen Elizabeth IIRoyal family
0
Share

Danielle Deadwyler Is a Best Actress Contender for ‘Till’ After NYFF

Sylvester Stallone, Jennifer Flavin brush off split days after being on brink of…

Monkeypox unlikely to be eliminated in the U.S.,…