Spirit of Virgil Abloh lives on at Louis Vuitton in Paris 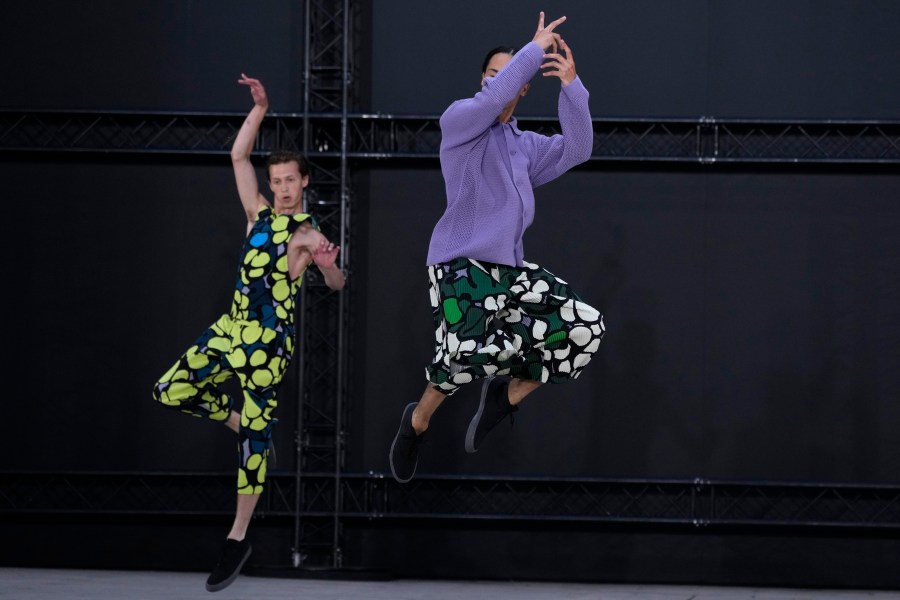 PARIS (AP) — He may have died last November, but Virgil Abloh lived on at Paris Fashion Week Thursday in a high-energy runway spectacular for Louis Vuitton menswear. A Black marching band gave a rousing performance on a surreal yellow brick road installation inside the Louvre, while rapper Kendrick Lamar performed a live ode to the American fashion star who was Vuitton’s menswear designer from 2018 until his death.

Here are some highlights of Thursday’s spring-summer 2023 shows in Paris.

“Long live Virgil … How many miles away?” went the live rap by Kendrick at the stiflingly hot Vuitton show. The set recalled the spirit of the Wizard of Oz and the childhood obsessions common in Abloh’s designs — as did a colorfully-dressed marching band and dancing troupe that appeared at the show’s beginning and end.

This spring-summer show was the first that Abloh had not designed. It was, instead, conceived by the Vuitton studio in his spirit.

It’s a remarkable feat for a studio to emulate a former designer’s styles — with originality.

This was the case at Thursday’s: From shirt hems quirkily cut in zigzag patterns, to 3-D paper plane appliques on suits and otherworldly, elongated silhouettes.

A finely tailored jacket with trompe l’oeil prints provided one of the many touches of old-school luxury. Such moments in this collection seemed even to surpass Abloh’s own runway designs.

They toed a careful line between the playful styles associated with the house since 2018 and the fine luxury tailoring seen during the tenure of predecessor Kim Jones.

The display’s strength was owed to its many feats of design. One case in point was the waist on a black double-breasted jacket that had been pulled in to resemble a V on its side. Its very silhouette evoked the house monogram.

Louis Vuitton’s design studio just bucked the trend of too many cooks spoiling the broth.

Blurring the line between fashion and performance, the Japanese house of Issey Miyake for Homme Plisse used a troupe of acrobats who contorted, danced and seemingly courted death for a spectacular Paris Fashion Week men’s show.

In eye-popping hues inspired by flowers and vases, models mingled with performers inside the newly renovated La Poste du Louvre for this unusual and sensitive showcase of fashion designs through dance.

From a hidden ledge high above the courtyard runway, a dancing troupe suddenly stood up mid-show to gasps from the audience. In pastel colored, loosely-fitting pleated garments the performers then climbed down ladders, before performing death-defying leaps, falls and tumbles. Performers were tossed through the air like missiles, to be caught by dancers across the courtyard. There was no safety net above the hard stone floor.

The show was directed by Rachid Ouramdane of the Théâtre National de Chaillot, featuring a collective of acrobats, Compagnie XY.

The fashion itself was soft in comparison. Gradual curves at the neck and midriff emulated the shapes of vases with a nice weight that produced a dynamic silhouette. A pleated tunic in pastel red was twinned with a short jacket, with breast panels that resembled an Asian warrior. Elsewhere, a waistcoat in vivid dandelion sported studded pockets that unfurled like an opening flower.

Color-blocking was also a strong theme — with pastel purple contrasting with blush and raisin black on one look, and on another pastel yellow and midnight blue. It was a strong return to the runway for Homme Plisse at Issey Miyake.

American designer Rick Owens delved into the ancient world for inspiration, returning from a stay in Egypt and a visit to the Temple of Edfu on the Nile.

Often the philosopher, Owens said that his “personal concerns … felt petty in the face of that kind of timelessness.” He has in recent seasons commented on the impact the pandemic has had on fashion and beyond — and embraced the lockdown as a time for introspection.

Owens has always had an aesthetic riffing on the garb of Ancient Egypt, with togas, drapes and high priestess styles gracing his runways. But on Thursday’s show he turned up the dial for a very personal take on such silhouettes.

“Lying down in the dirt with the Valley of Kings within view was a perspective I liked,” he said.

Like the long stone carvings on the ancient temple, silhouettes were elongated by layering garments to drop the midriff low. Dark flared pants were so long the fabric grazed along the stone steps as the models walked down the Palais de Tokyo venue. It created a funky surreal effect.

How to save money on gas, with or without a federal gas tax holiday

A Summer Capsule Collection Inspired by an Italian Getaway

Leila Mottley Graduated From High School and Wrote a Novel

‘Hallelujah’ Review: From Leonard Cohen to Cale to Buckley to Shrek

4 Ways to Find Your Target Audience On Social…

6 financial mistakes I made as a new grad

What Californians Love About Summer