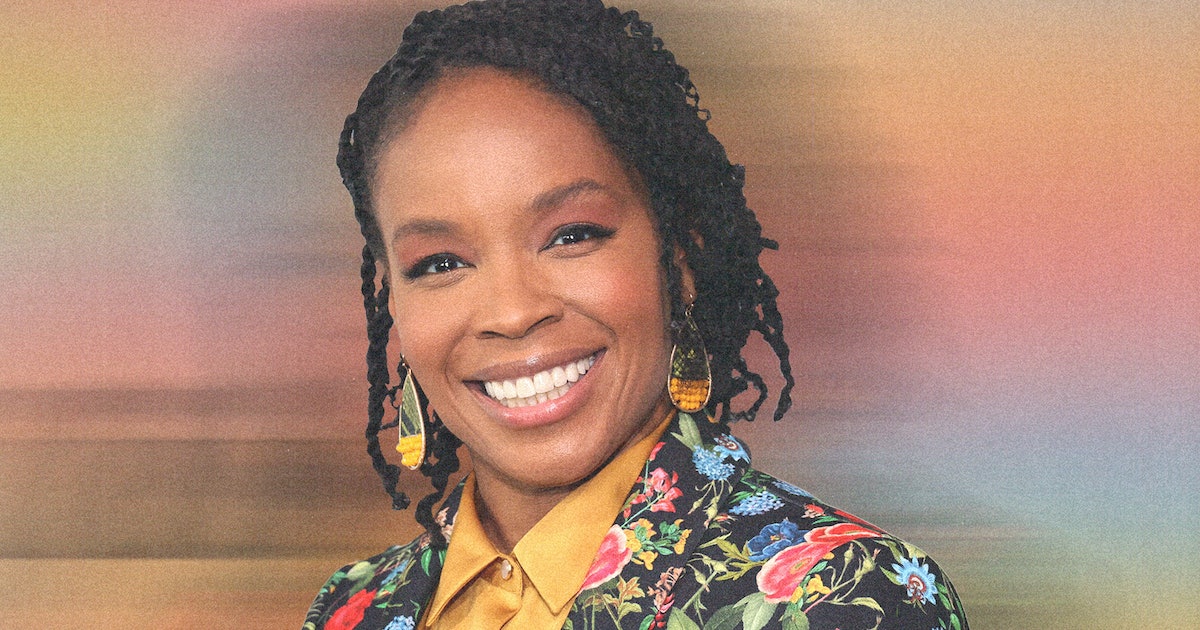 “Baby, do you need a margarita?” is the first question Amber Ruffin, host of her eponymous Peacock late night talk show, asks when I meet her after a taping of The Amber Ruffin Show. The backstage area designated for Ruffin and her writers at 30 Rockefeller Plaza is already a party room at 3 P.M. Ruffin is ready to unwind.

Ruffin, who has been nominated for an Emmy four times for her writing on Late Night With Seth Meyers and once for The Amber Ruffin Show, welcomed me into the room, margarita in hand, and dove right in, discussing the state of the world and her inspiration for commenting on the news. “I couldn’t have a sad show! I can’t do that,” she says. The host had just interviewed Cynthia Erivo, and played a game with her sister, Lacey Lamar, and El DeBarge for her show’s second season finale—the bit certainly wasn’t sad. The crowd, warmed up by comedian Marie Faustin, was energetic, and the show, described as a “smart-and-silly” take on current events, lived up to its reputation. Below, Ruffin talks about her hopes for the show, the story behind her signature look, and her favorite interview guest.

You wear a different colorful suit for each episode of The Amber Ruffin Show. Why did you decide to stick to suits?

They told me I was doing the show and asked what I wanted to look like, and I said, “Kurt Hummel from Glee.”

How would you describe your style?

Once, outside of work—and this is true—I was standing and I had a cup of coffee that I had drank and a cigarette in my hand, and someone put money in my cup of coffee. That is what I normally look like, like Eddie Murphy in Trading Places. From the outside, I would say it’s slightly androgynous, but from the inside, I would say just the comfy cutest. It’s too much to wear a fashion-y dress. No! No one is seeing my arms and my legs but my husband. I want to be covered. If I could wear a hoodie, I would.

Do you get to keep anything that the wardrobe team dresses you in for the show?

I’ve never gotten to keep anything, but also I don’t like stuff. If you came into my house, you would be like, Oh, this is a hotel. That’s how little stuff I have. I am a minimalist. I have nothing. If I needed to throw away half my wardrobe tomorrow, I could do it. I wouldn’t bat an eye.

Who is your style icon?

Cynthia Erivo. She was saying something to the effect of, “My goal is fun.” I’m like, that’s it. Clothes are a fun, stupid, goofy thing. I always [think], what is the silliest thing I can wear and not feel too embarrassed? I like to feel a little bit embarrassed.

Who is your favorite guest that you’ve interviewed on your show?

I don’t have a favorite. I bet when I interview Seth [Meyers], that’ll be my favorite. ’Cause he’s bad.

You’ve wrapped two seasons of the show. What do you want people to take away from an episode when they’ve finished watching?

I want them to feel a little more comfortable in their skin. The fire behind the show was that period of time when the news wouldn’t call racist stuff “racist.” And then I became fully insane. I just thought, if just one human being would go on TV and call shit “shit,” we wouldn’t have to feel like this. And like every Black woman in America, I said, Fuck it. I’ll do it. And that’s why I do it.

What’s the first thing you read in the morning?

What shows have been keeping you up at night?

I watch every TV show. There is no TV show that I don’t watch. I loved Killing It with Craig Robinson. I just sat down and I thought, I work for Peacock, I should support this show. And I adore Craig Robinson. I turned it on, and one second later, the entire season was over. That was a very good show. I’m shocked that more people didn’t latch onto it. But I bet they will. Let me tweet that.

What are your favorite social media accounts to follow?

Rex Chapman is good for you. He’s giving you what you need to be a human being in this world. He’s very aware that the world sucks and you need to see a puppy dog biting its own tail. And Michael Harriot. He writes our “How did we get here?” segment. He got the job because he’ll tweet these threads and they destroy everything you thought you knew. I was like, I gotta get this guy.

Are there any books on your bedside table?

I’m sorry you have to be the one to hear this. I almost never read books.

No, I can’t sit still. I’m either watching TV or actively doing something, but I can’t calmly read a book. I’d rather die. My memory’s just too slow to read. It makes me mad.

What was the last movie you saw in theaters?

Everything Everywhere All At Once. That was great. It was hyped up! I thought it wouldn’t live up, but it did. It was beautiful.

What’s the last concert you attended?

Stevie Wonder in Amsterdam. I was on a date.

What’s the last song you had on repeat?

Beyoncé’s “Get Me Bodied.”

You’re a Capricorn. Do you feel like astrology is accurate for you?

I have no idea what it is, but I’m sure it’s great.

What’s the last thing you do before you go to bed?

I go to the bathroom and I wash my face and I take out my contacts. Then I change into my sleepy clothes. I’ll tell my husband to come to bed and then he does, and he puts his arm out and I squish into it. I play one game of Wordle and two games of Candy Crush. And then I pass out.

My Partner Wants to Move His Parents Into Our House. Help!

The Wit and Wordplay of Willie Norris