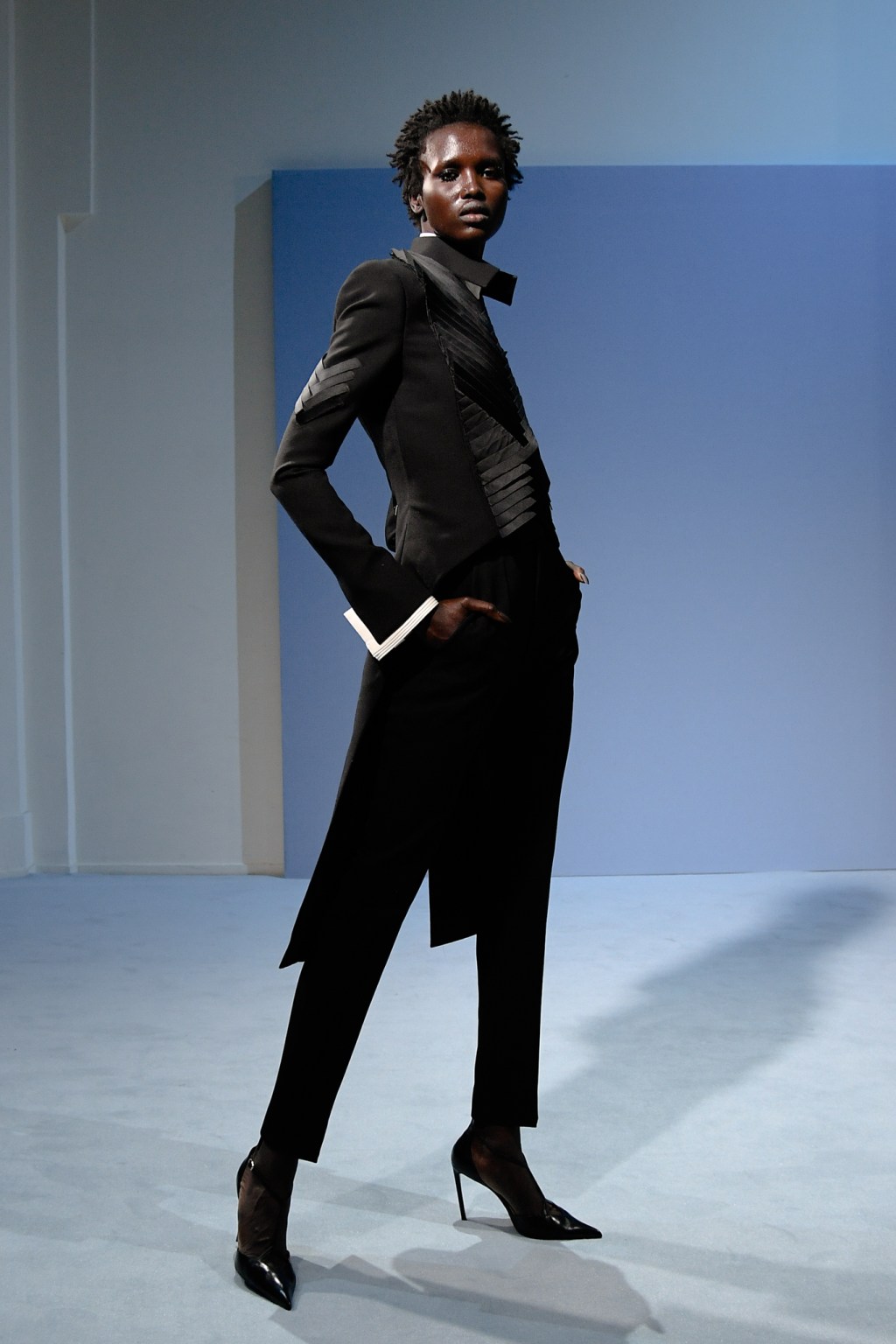 Two slim figures in black suits — shoulders square, pants pegged over stilettos — appeared in the distance and tread slowly across a vast, ice-blue carpet as static fizzed and a heartbeat grew louder. When they approached, a viewer discovered the jackets were tailcoats, one with loose threads scribbled like hand-drawn pinstripes, the other fronted with a jabot of origami-like pleats — wholly new takes on masculine-feminine.

In a brilliant mind meld, Haider Ackermann etched the formidable fashion legacy of Jean Paul Gaultier with his own inimitable hand — minimal and rigorous, yet with some sexual heat simmering underneath.

“Sometimes we forget the essence of his work, which was immaculate,” Ackermann said after he hugged Tilda Swinton long and tight, and posed for photos with Gaultier, Catherine Deneuve and a torrent of well-wishers. “I wanted to get back to what I love from him.”

In an interview with WWD last November, Ackermann cited a wish to exalt Gaultier’s quieter side — his tailoring prowess and dressmaking wizardry — rather than the zanier, more theatrical designs that grabbed more headlines over the years.

“Sometimes all those millimeters are forgotten, how perfect couture can be,” he said at the time.

His versions of tuxedos were all sharp angles, unexpected slashes here and tabs of gently frayed ribbons there; his cone bras artful folds of thick satin; his bomber jackets bristling with pin-like embroideries, and his siren gowns intricately pleated to suggest female anatomy without photo prints, as the founder might have.

A sleek suit with colorful feathers erupting from the sleeves in Gaultier’s first couture show some 25 years ago was among the designs that gave goosebumps to a young fashion student in Antwerp, Belgium. Ackermann employed stiff feathers for a bristly pencil skirt, or had them bursting between the lapels of a killer black jacket.

Ackermann pared down the guest list, yet the room thrummed with famous faces and cultural icons, including the artist Anselm Kiefer, filmmakers Baz Luhrmann and Wes Anderson, designers Julien Dossena and Olivier Rousteing and actor Timothée Chalamet, who has kept Ackermann’s name firmly in the spotlight by wearing his vaguely futuristic tailoring — and occasionally a backless top.

The show included a couple of men’s look that seemed expressly made for the “Dune” actor, particularly a prickly coat.

Ackermann is the fourth guest couturier to test-drive one of the most formidable ateliers in Paris and to dive into one of its richest archives in fashion following Gaultier’s retirement from the runway in early 2020 after half a century of creation.

Ackermann has been away from the runway for a few years, having paused his signature brand, and he pulled off his big comeback with fierce intelligence, formidable cutting skills, and tenderness, too. A sculptural gown with a rounded top seemed to wink to Gaultier’s early days working for Pierre Cardin and the pants hiked up past the bosom and held up with suspenders to his heady Madonna moments.

It was a bomber with an extra-long, undulating zipper in one of Ackermann’s early collections that first caught Gaultier’s eye and Ackermann made a version to tickle him anew: an enveloping black hoodie, the zippers arranged into ruffles.

“I realized that we have much more in common than I thought,” he marveled.