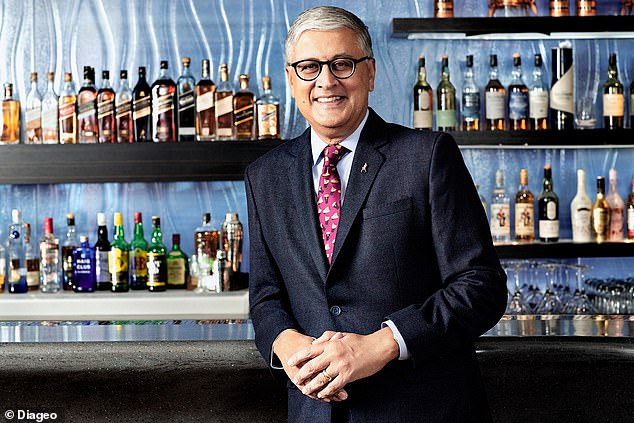 By Jane Denton For Thisismoney

The London-based group, which makes Tanqueray gin, Captain Morgan’s rum and Ketel One vodka, said organic net sales jumped 9.4 per cent in the six months to 31 December, beating analyst forecasts for a 7.9 per cent increase.

In charge: Ivan Menezes is the chief executive of global drinks group Diageo

The group, which said people mainly drank more tequila, scotch and Guinness, added it would return up to £500million to shareholders in addition to its existing buyback commitment this financial year. It raised its interim dividend by 5 per cent to 30.83p a share.

The spirits market has been resilient amid a global cost inflation that has otherwise hit volumes at other consumer goods companies, with people continuing to buy what they consider occasional treats for themselves even as they trade down to cheaper food brands.

Diageo’s ‘premium-plus’ brands, which are more expensive than brands such as Smirnoff vodka, drove 65 per cent of its organic net sales growth.

Since the pandemic, Diageo has benefited from people buying more expensive forms of alcohol to consume at home.

The company and its rivals have invested heavily in marketing and improving their products to capitalise on newfound demand, focusing on premium brands such as Bulleit Bourbon and Don Julio tequila.

He added: ‘While the operating environment remains challenging, I remain confident in the resilience of our business and our ability to navigate volatility.’

Chris Beckett, head of equity research at Quilter Cheviot, said: ‘This morning’s results show Diageo’s sales and profits have both beaten expectations which is certainly a good thing.

‘However, while its sales in Europe and Asia remain strong, its performance in the USA is disappointing. That said, Tequila continues to sell well in the US, while Scotch is one of its best performing products elsewhere.

‘The impact of the world opening back up after lockdown and the boost in sales as a result, can still be seen in these results but it will normalise from here onwards. Diageo’s guide on future performance is just about OK but the market will likely focus on the expectation of further normalisation in Europe and the USA as the pandemic now is firmly in the rear view mirror.

‘The market is currently against this type of defensive name and shares will probably be weak today after these results. But the company’s long term focus on pricing power and premiumisation is clear to see in these numbers.’