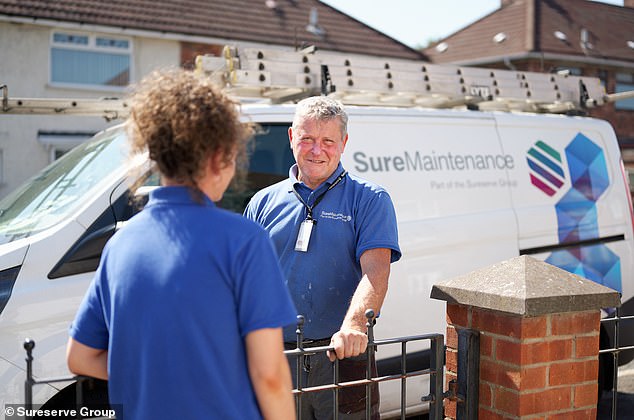 Energy services provider Sureserve has reported significant growth in annual sales and earnings as its gas businesses continued to win an extensive volume of large-sized contracts.

Revenue at the group, which primarily works on social housing projects, surged by 27 per cent to £275.1million for the year ending 30 September, while profits from continuing operations grew by £4million to £13.1million.

All three of its gas companies achieved double-digit percentage expansion in sales, supported by contractual price increase mechanisms that helped offset some of the elevated cost pressures experienced during the year.

Growth: Revenue at energy services provider Sureserve, which primarily works on social housing projects, surged by 27 per cent to £275.1million for the year ending 30 September

They also gained a considerable number of new contracts, with the largest being an eight-year, £68million deal with housing association L&Q to provide gas, repair and installation services.

Though the value of all contracts won by Sureserve fell by more than 30 per cent on the previous year, the average length of each deal now lasts six years instead of five, and its order book soared by 18 per cent to £593.5million.

The Kent-headquartered firm’s energy efficiency and renewables divisions, which include Everwarm and joint venture Warmworks, have also been awarded numerous deals from public bodies.

As part of its strategy, Sureserve is aiming to boost its presence as a major heating maintenance provider to the British social housing sector and double sales over the next four years, partly through buying gas heating and green energy companies.

To this effect, it bought renewables specialist CorEnergy for £7.6million in December 2021, a takeover hailed as a ‘real success’ by the business because the subsidiary has performed better than management forecasts.

‘We remain focused on pursuing a strategy of both organic growth and acquisitions to increase our presence in the gas heating and renewables sectors, and our acquisition of CorEnergy has proven to be a successful addition to our renewables expertise.

‘In a fragmented market, our defined strategy supports our ambitions to be a leading social housing energy services provider delivering projects that matter at the forefront of the UK energy transition.’

Formerly known as Lakehouse, the firm stands to profit in the coming years from the decarbonisation and efficiency upgrades required for the UK’s notoriously draughty housing stock.

It said trading since the beginning of October had been strong and that almost 80 per cent of its expected revenues for this fiscal year were covered by the enlarged order book.

‘Against the backdrop of a global energy crisis and a global trajectory towards sustainable energy sources, Sureserve’s strategy of balancing both renewables and gas makes sense,’ said Neil Shah, Edison Group’s director of research.

Sureserve Group shares each closed 3.55 per cent higher at 87.5p on Tuesday.