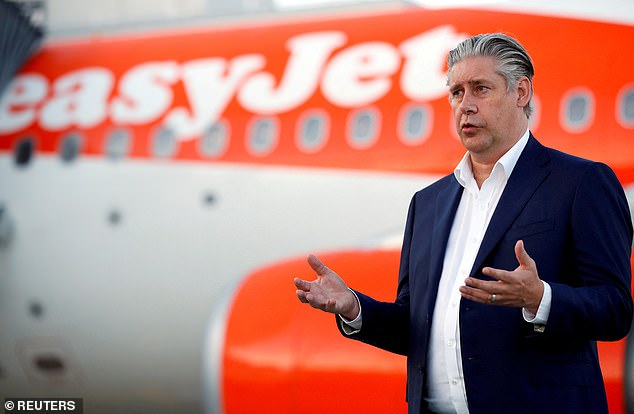 By Archie Mitchell For The Daily Mail

Squeezed consumers are pressing ahead with trips abroad despite the rising cost of living, says Easyjet’s boss.

‘Travel has moved up to the top spot when it comes to discretionary spending. People want to travel,’ Johan Lundgren said.

His comments came after the budget carrier saw a surge in passengers in the last three months of 2022. Easyjet flew 17.5m people in the quarter, a 47 per cent jump from a year earlier.

Easyjet boss Johan Lundgren said he was ‘surprised’ how strong demand was against the bleak backdrop, as families face soaring food, fuel and energy bills

And the airline said it will be back in the black this year after three years of losses. In the 12 months to September, Lundgren said it will smash analyst forecasts of a £126million profit. Shares jumped 9.7 per cent, or 45.4p, to 513.4p.

The stock has surged nearly 60 per cent since the start of the year amid growing evidence that holidays remain a priority for cash-strapped households.

A report by KPMG found that while almost two thirds of people in the UK will cut their spending this year, holiday plans were the least likely to be dashed.

AJ Bell investment director Russ Mould said: ‘Many consumers still have the appetite and the means to spend money on experiences despite the prospect of recession.

People work hard and they want to give themselves a treat, meaning a foreign holiday remains high on the list of things people are prepared to pay for.’

Lundgren said he was ‘surprised’ how strong demand was against the bleak backdrop, as families face soaring food, fuel and energy bills.

Easyjet’s performance has continued into this year, helped by three record-breaking weekends this month.

Customers took advantage of January sales and the airline was filling up five planes every minute during peak hours.

Bookings for Easter are a quarter ahead of pre-Covid levels and there is big demand for summer getaways despite prices for Easter being almost a quarter higher than the same time before Covid struck.

‘People have had restrictions and been at home a lot and they want to get out and experience things,’ Lundgren said.

The rising cost of living was driving a shift towards more affordable breaks. Trips to Turkey and Egypt are doing ‘exceptionally well’.

He said flight availability will return to pre-Covid levels by the summer. ‘By July, August and September we expect to be back at 2019 levels,’ Lundgren said.

Jordanians burn Swedish flag in front of embassy in Amman

Why Vice, BBC, WaPo, others see new TikTok teams as the next wave of specialist publishing talent