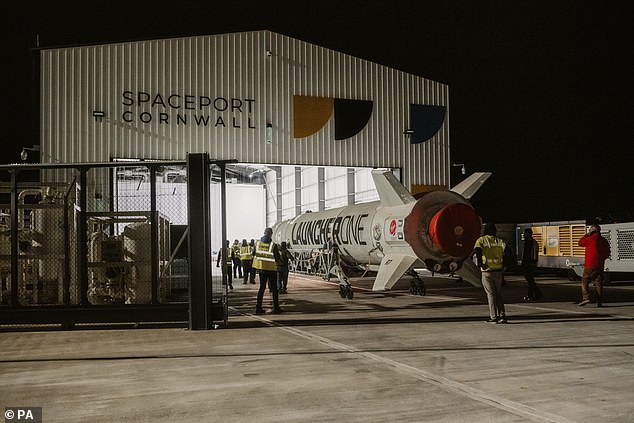 The failure of Virgin Orbit’s first attempt at a UK-based satellite launch will not deter Britain’s push to become a leader in the global space industry, which it is estimated will be worth $1trillion by 2040.

Nasdaq-listed Virgin Orbit shares crashed back to earth after the 9 January Cornwall launch dampened investor hopes, but the group quickly pledged to try again, as bosses joined the UK Space Agency (UKSA) in insisting it had been ‘an important step forward’.

Virgin Orbit’s ambitions are an indicator of the effort and hundreds of millions of pounds being spent by the private and public sector every year, in efforts to make Britain one of just nine countries that can launch a satellite into orbit.

According to the most recent Government figures, £836million was spent on space related research and development in the 2019/20 financial year, up 19 per cent on the previous 12 months.

The Government says increased contributions from UKSA were responsible for ‘driving a large part of this’.

Meanwhile, the Government has ‘invested over £40million to grow the UK’s spaceflight capabilities’, and is funding a range of industry-led projects, including Spaceport Cornwall.

The growing levels of investment in the space economy should be of no surprise. The global space economy grew by 9 per cent in 2021 and is now estimated to be worth $489billion (£400.3billion), according to US non-profit the Space Foundation.

And analysts expect this trajectory to be maintained in the years to come, with Morgan Stanley estimating the global space industry will be worth $1trillion by 2040.

Chief commercial and product officer at British satellite telecoms group Inmarsat, Jat Brainch, said that investment of this kind enables the future use of technologies the world is yet to see.

The potential value unleashed could therefore be far greater than current estimates, she told This is Money, pointing to technology like 3D printing and drones that would not be possible without investment in satellites.

‘Most of the satellites we use predate the iPhone,’ She added. ‘I think the figures may be underestimating it.’

Although the failed Virgin Orbit launch was a disappointment, industry experts say the technological advancements made in the run-up have opened up other opportunities. 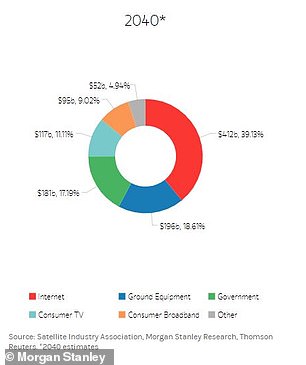 CEO of London-listed investment trust Seraphim Space, which invests in early stage ‘SpaceTech’ companies, Mark Boggett said: ‘Virgin’s setback will not stop the significant strides being made by the UK space sector.

‘The achievements made in the run-up to… [the Virgin launch] will further drive domestic and international investment, creating more opportunities for launch to become a regular practice in Britain.’

‘The UK Government is completely behind the sector and is looking to be bold, which includes exciting future uses for space, especially in climate and sustainability applications.

‘Rocket launch forms just one part of a wide-ranging and comprehensive space strategy that will continue to position the UK as a global leader in a fast-growing market.’

British ‘space-related’ organisations produced £16.5billion in income in the 2019/2020 financial year, according to Government data, with the industry directly employing roughly 50,000 people in the UK and supporting 190,000 jobs across the wider economy.

And, at a time of slowing economic growth, that’s good news. UK space industry employment is growing at a rate of around 7 per cent each year.

In efforts to capitalise on the potential of this industry, the UK launched its Space Strategy in 2021 with regulations changed to allow the Civil Aviation Authority to begin issuing licences to spaceports.

The Cornwall site is one of seven proposed spaceport locations in the UK, five of which are based in Scotland. 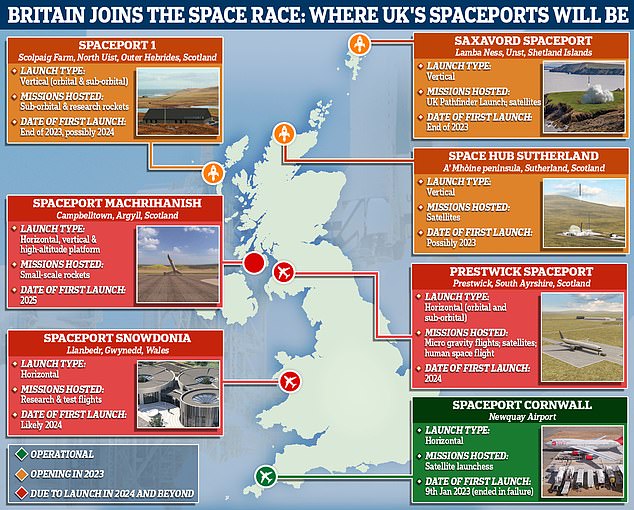 The Cornwall site is one of seven proposed spaceport locations in the UK, five of which are based in Scotland.

Director of spacecraft operations at UK-based satellite operator Avanti Communications Paul Collins explained that, outside of the US, Russia and China, there are limited options for launch sites, which creates major cost and logistics pressures for European operators.

He told This is Money: ‘For spacecraft manufactured in Europe, the majority of which are actually manufactured in the UK, they have to be shipped halfway across the world to be launched.

‘So from a sustainability and cost perspective, it’s not ideal.

‘The UK is trying to provide two or three different launch locations for different styles of launches. To have these capabilities in Europe is a big advantage for all of the European operators and European manufacturers.’

Avanti chief financial officer Rob Plew added: ‘The cost of launching these payloads historically has been enormous – paying the launch provider and also the insurance that you need to cover the launch should something go wrong.

‘Relatively cheap launch capabilities, could be a real game changer for expanding the space industry.’

Lower cost of entry also opens space up to smaller players, Collins added, while offering a boost to the UK’s manufacturing sector.

He said: ‘The UK has always been a big global player in the space industry, primarily from a more from an operations and a manufacturing perspective.

‘The capability to have an end-to-end service, from design through to manufacturing and all the way through to launch on UK soil, suddenly becomes very interesting.’

How To Optimize Your Site For Any Device