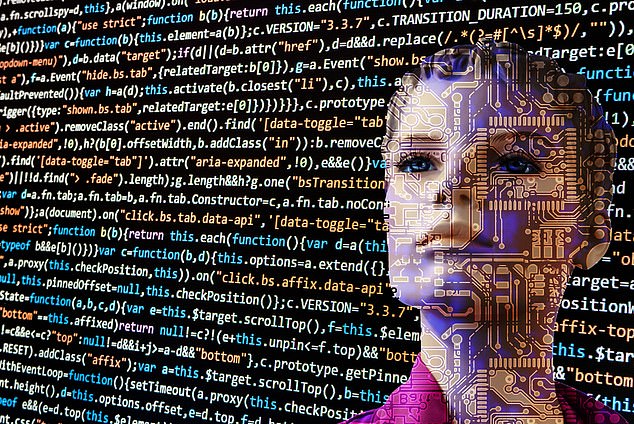 It’s been described as the biggest technological breakthrough since the printing press, electricity and even fire.

So it’s perhaps no surprise Microsoft has pumped as much as £8billion into a new partnership with artificial intelligence leader Open AI, and its much-hyped Chat GPT model.

It’s all part of an expensive and long-haul push into a brave new world where content and productivity are king.

Brave new world: Microsoft has pumped as much as £8bn into a new partnership with artificial intelligence leader OpenAI, and its much-hyped ChatGPT model

In its simplest terms, artificial intelligence (AI) is computer programming that allows machines to behave like humans.

Examples include everything from the spam filter in your inbox, which is trained to recognise ‘junk’, to Amazon Alexas dotted around your home that respond to your voice.

First developed in the 1950s, AI means computers can be trained to mimic conversation, make predictions or recommendations, and ultimately process data in a much faster and efficient way than humans can.

So why, if AI has been around for so long, are we seeing such an acceleration in 2023?

The key reason, according to Dr Mhairi Aitken, research fellow at science hub The Alan Turing Institute, is because of the advances in ‘generative AI’, which not only makes processes faster but can be used to create completely original and new content, including audio, images, texts and videos.

Chat GPT, which is owned by Elon Musk-backed Open AI, is the most famous of these computer models, which exploded in popularity after it was made free to use for the public back in November, with over 1m users in five days.

Whether the former US treasury secretary Larry Summers is correct in describing the model as ‘on par with the printing presses, electricity and even the wheel and fire’, the output is certainly impressive.

Last weekend Chat GPT was able to produce an essay that passed the final MBA business leadership exam at a top US college, and has been used to draft legal contracts, create works of art, and produce original song lyrics in the style of any artist in the world.

Tech analyst Matt Navarra said Microsoft’s investment into Open AI was a ‘shrewd move’, reflecting the company’s desperate attempt to modernise and flex its muscles at Google, which has been working away on its own generative AI for a while. ‘The fact Microsoft has pulled this off is a huge success story for them,’ he said.

Wedbush analyst Dan Ives dubbed it an ‘AI arms race’, where each tech company is looking to take the lead in this highly lucrative sector.

‘All the big companies are going to make big bets on AI with a payoff that begins in 2023 and beyond. It’s the fourth industrial revolution. Despite the dark macroeconomic backdrop, tech stalwarts remain in growth mode,’ he explained.

Estimates from Air Street Capital’s State of AI report 2022 suggest that worldwide investment in AI scale-up and start-ups was close to £40billion last year, with almost all of Silicon Valley wading into the mix.

The stakes are high. PwC reckons AI could contribute up to £13trillion to the global economy in 2030, more than the current output of China and India combined.

Shortly after Microsoft announced the Open AI deal, Google issued an internal ‘code red’, pushing plans to demo an AI version of its search engine out of fear Microsoft could integrate Chat GPT into its own, lesser used, search engine Bing.

The flip side with all of these advances is the question mark surrounding jobs. This has felt particularly pertinent considering the firms that are investing are also laying off staff.

Data tracker Layoffs.fyi estimates that as many as 57,000 people in the tech sector have been laid off in 2023 alone.

Yet the consensus is that this is poor timing rather than a loaded strategy from big tech.

Michael Gartenberg, a tech analyst at Flash Advisory & Research, rejected the correlation between AI investment and layoffs. He said although it was ‘poor optics’ for a company like Microsoft, tech giants have slowly but moving into AI.

After all, Microsoft invested more than £800m into Open AI back in 2019, long before AI novices were using it to write Linkedin marketing posts.

Aitken also underplayed the wider fears surrounding job safety. ‘AI is going to automate many of the tasks in the workplace, but it won’t completely get rid of the jobs,’ she said, saying the solution is making new jobs that focus on creating and managing AI tech as it touches every single sector, from fashion to medicine development.

A report from HSBC, “Will AI take your job?”, written by economist James Pomeroy makes a similar point.

‘It’s more likely that AI takes some (the boring bit) of your job, rather than all of it,’ he explains. This could trigger some substantial productivity gains for many roles if used correctly, and although the outlook for AI and its impact is uncertain, this is just the beginning.’

So as an AI war dawns between Google and Microsoft, the reality is that AI is here to stay –reinventing what our jobs look like, what Silicon Valley looks like and perhaps even what the world of business, art and music looks like.

An In-Depth Guide For Beginners