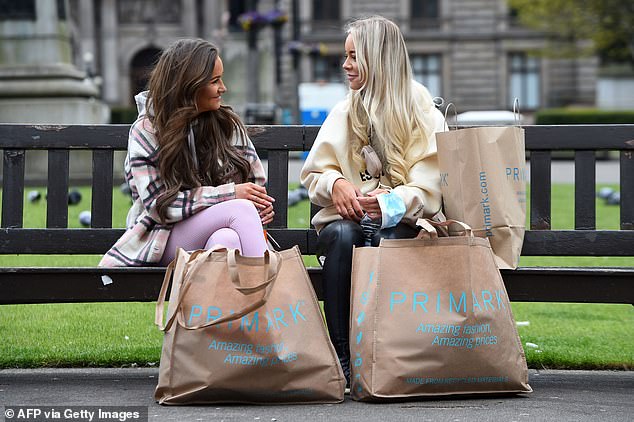 Turnover at the Primark owner climbed by 16 per cent on a constant currency basis to £6.7billion in the 20 weeks ending 7 January, with solid growth recorded across all of its food and retail businesses.

Primark profited as stores reopened, but said the pingdemic is now denting sales

UK trade was bolstered by footfall rebounding at prominent city centre outlets, more normalised markdown levels, and the retailer expanding its share of the clothing, footwear and accessories market.

Within Europe and the US, revenue was aided by the opening of new stores in cities like New York, Naples and Romania’s capital Bucharest.

The retailer’s adjusted operating profit margin was better than expected but remains below 2019 levels, due to surging workforce and energy costs, freight rates and an appreciating US dollar.

Primark is not planning to impose any further price increases beyond those already planned until the upcoming summer in order to ensure its products remain affordable.

Even so, ABF warned that current economic troubles ‘may weigh on consumer spending in the months ahead’.

Inflationary pressures continue to affect the FTSE 100 group’s food business, yet it noted that some commodity costs had fallen while other input costs had been offset by price hikes, especially in its food segments.

Its sugar arm saw the greatest increase in sales, climbing by more than a quarter to £795million, despite production in the UK being impacted by poor weather as it benefited from rising sugar and co-product prices in Europe and Africa.

Aarin Chiekrie, an equity analyst at Hargreaves Lansdown, said: ‘One of ABF’s main strengths is its diversified business portfolio, which includes many well-known food brands such as Kingsmill, Ryvita and Twinings.

‘This diversification helps to mitigate risk and ensures that the company isn’t overly reliant on any one particular product.’

The London-based company nonetheless forecasts its overall adjusted operating profits and adjusted earnings per share will be lower this year despite a substantial growth in turnover.

Associated British Foods shares were down 1.55 per cent to 1,840.5p during the late morning on Tuesday, although their value has still grown by around 37 per cent in the past three months.

Meller closes 2022 with a turnover of 11 million euros