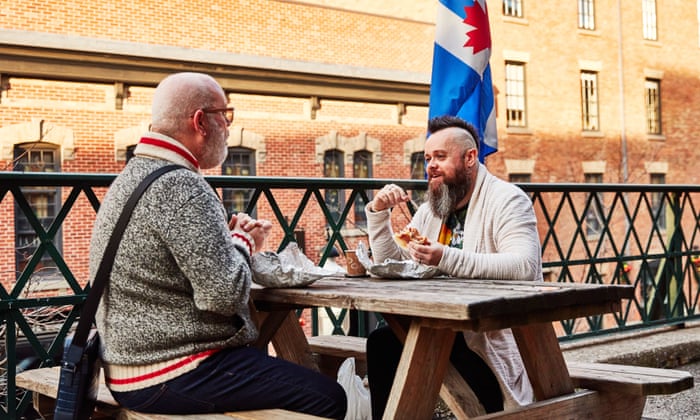 “I never realised how famous a simple bacon sandwich could be,” says Gavan Knox, a self-described foodie who moved to Toronto from London in 2016. “The bakery I get them from has pictures on the wall of celebrities trying them out.”

Speaking from his home in Scarborough, a community on the eastern edge of Toronto, you can hear Gavan’s love for Carousel Bakery’s carnivorous snack radiating through the screen. The sandwich is scrumptious in its simplicity. “It’s a bread roll with several slices of perfect peameal bacon, and a fried egg if you like. It’s absolutely irresistible,” he says.

Run by brothers Maurice and Robert Biancolin, Carousel Bakery is an institution at Toronto’s St Lawrence Market, and its bacon, like any sought-after treat worth its salt, is made by a “secret producer”. Peameal bacon, by the way, is an Ontario speciality and owes its name to the ground dried peas that it used to be rolled in before producers switched to cornmeal.

For Gavan and his partner Scott Knox, there isn’t a much better way to spend a morning than at St Lawrence Market. “Seeing the butchers, fishmongers and bakers at work, it’s just got this ambience that I love,” he enthuses. “There’s an awesome cheese store there too, Olympic Cheese, which is said to have 800 kinds of cheese. Scott loves it, so I can leave him there and do a circuit of the market. Guaranteed he’ll have a few bags full by the time I get back.”

As a keen cook and baker, Gavan knows the market is a place where he can track down hard-to-find items. “There are a couple of world food stores, which I love, because if I’m looking for a certain ingredient to make, say, Thai or Ghanaian food, I can go there and the chances are, I’ll find it.”

Scott and Gavan sound like Toronto natives, the way they know the city’s food scene like their own backyard – you’d never think they’d only lived there for a few years. The pair met in 2003 in Manchester and moved in together in London a few months later. But in 2016, Canada came knocking.

They had taken a holiday to Toronto in 2015 and Scott, who at the time was managing director of the Marketing Agencies Association in the UK, had lunch with the president of the Institute of Communication Agencies (ICA), an association that represents Canadian advertising, marketing, media and public relations agencies. “A year later, she called me and said: ‘I’m retiring, have you ever thought about moving to Canada?’ So we took the decision to go – and now I’m president and CEO of the ICA. We gave ourselves two years, and said that if we didn’t like it, we’d return to the UK. Five years later, we’ve bought the house we now live in, and love it here.”

For Gavan, the move was made easier by the fact he felt right at home among the foodie crowd in Ontario’s capital. He had made a name for himself in the UK through his baking business, Mr Mom’s Kitchen, gaining further recognition, and making a TV appearance, after winning an award for one of his recipes through Observer Food Monthly. He soon found foodie friends aplenty in his new home town. “On occasion it’s been a little disconcerting,” laughs Scott. “We’d go into a restaurant and the owner or the chef comes out and starts talking to Gavan. And I’m thinking, how do you know each other!”

On the whole, the couple find the restaurant scene in the city friendly and “democratic”, whereas in London, they feel, high-end places can tend to verge on the elitist. They rave about Akira Back, a luxury Japanese restaurant in the Bisha Hotel, where the eponymous chef creates modern Japanese dishes with Korean flavours. “The food is just outstanding,” says Scott. “They do this thing called a mushroom and salmon pizza, which is one of their starter dishes. Honestly, it is just heavenly.”

The couple have no end of places to recommend for anyone new to the city. Si Lom Thai is a favourite, located on Church St in the gay village. “It’s the best Thai we’ve had in Toronto,” says Gavan, adding that they like it also because it’s so family friendly. The couple have two adopted children, age 13 and 14. “One of the things that I love about Si Lom is that it’s fully authentic. They even come up with these crazy delicious Thai cocktails.”

And, of course, no visit to Canada is complete without brunch. “I was astounded by how big brunch is in Canada compared to the UK,” says Gavan, mentioning Smith, a French restaurant, also in the village, as their ultimate, top choice for a mid-morning stop. “If you’re in Toronto, it’s a great go-to for brunch,” he says, although due to Covid-19, it’s now only open on the weekend. Diners can tuck into classic dishes such as eggs benedict, croque madame and the Smith ruben, that’s corned beef, sauerkraut and pickles on rye, but Gavan’s particular favourite is chicken and waffles served with greens and a bourbon chilli syrup.

If you’re looking to get out of town (and are a fried chicken lover like Gavan), the pair suggest heading to Butchie’s, located on Dundas Street West in Whitby. It’s about an hour’s drive from downtown Toronto, and Gavan and Scott say it’s well worth a pit stop for its smoked meats and fried chicken. Alongside the pub-style fare, its atmosphere is part of the appeal. “You walk in and the staff are really friendly. Even now with Covid protocols and precautions, they still have time to have a conversation with you,” says Gavan.

Friendliness seems to be a theme running through the couple’s experience of the Ontario food scene, as well as the quality of the dishes served up. And it’s not just at restaurants that this friendly vibe comes through. Scott occasionally attends business functions through his work, and notes that even within the catering industry, a can-do attitude and welcoming spirit shines through. One of his favourite places for corporate events is the Westin Trillium at Blue Mountain, a luxury hotel nestled on Georgian Bay, two hours northwest of Toronto. “There’s nothing too difficult to get done there,” he says, even for events of 150-200 people.

If you are there in winter, whether for work or pleasure, the hotel’s O&B cafe offers superb dining in a relaxed atmosphere where skiers can come in off the slopes and eat in their gear before heading out again, suitably replenished. Tuck in to the wonderfully named chicken and leek potstickers (dumplings) or a bee sting pizza with a side of grilled cornbread and maple butter.

If you feel like venturing farther afield, Blue Mountain resort is home to small town cafes and restaurants offering a warm welcome, steaming mugs of hot chocolate and cakes that you won’t be able to resist, especially after a day outdoors

Gavan and Scott value the friendly welcomes wherever they go, and the multiculturalism that is ever present too: “I love the fact that Canada’s food scene embraces many cultures, making them as accessible as possible,” says Gavan, adding that it’s on his bucket list to try more restaurants that specialise in First Nations food. Drinks-wise, he highlights Red Tape Brewery, and its beers influenced by Inuit culture. He says that the Paunnat Saison beer is brewed with paunnat flowers that are native to Nunavut, Canada’s northernmost territory, and home mainly to Inuit people.

Whether it’s rhapsodising over the perfect Japanese starter or explaining the uncomplicated satisfaction of four slices of bacon in a roll, chatting to Gavan and Scott Knox is enough to make anyone feel peckish. And it’s clear there is something for every budget in Toronto and the surrounding areas, be it authentic Thai food, pub-style grub, or a classic brunch, Canadian-style.

McDonald’s storm over antibiotics in its beef

‘The Wife’ star Bonko Khoza on his favourite television shows

Almost 3 million Aussies are set for a big payment…