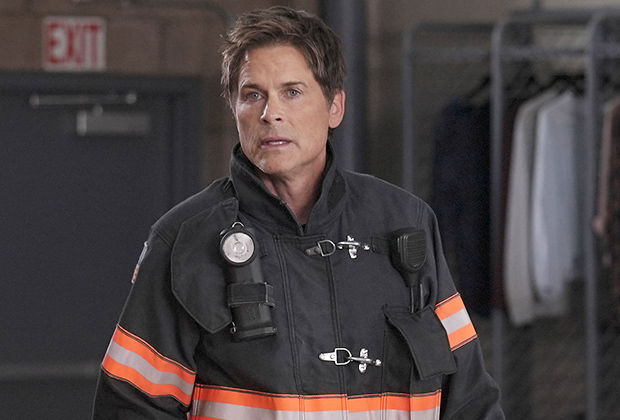 9-1-1: Lone Star returned for its fourth season on Tuesday, bringing plenty of emotional upheaval — and the occasional airborne porta potty — for the 126.

Let’s begin with the literal frognado that put Tommy in the path of her next potential love interest, a single father named Trevor (played by Gina Torres’ former Suits co-star D.B. Woodside). After multiple run-ins, she finally gathered the courage to give him her number… only to discover on Sunday morning that he’s the new pastor at her church! (“I think I made a pass at my pastor.”)

Elsewhere, Owen had the misfortune of discovering that his new motorcycle buddies are actually neo-Nazis. He had every intention of kicking his friends to the curb, until an FBI agent (played by Amanda Schull, another Suits vet!) showed up at his door with an offer we doubt he’ll be able to refuse.

And then there’s #Tarlos. The perfect venue opened up for the grooms-to-be, but there’s a catch: the whole wedding needs to come together in eight weeks. Actually, there’s another catch: Carlos is already married! It turns out he swapped vows with Michelle’s sister Iris (Lyndsy Fonseca) in the name of getting her better healthcare. Fortunately, she’s now doing much better, and she gave Carlos her blessing to divorce her and marry T.K.

Read on for showrunner Tim Minear‘s thoughts on some of the premiere’s biggest surprises, then drop a comment with your hopes for the rest of Season 4.