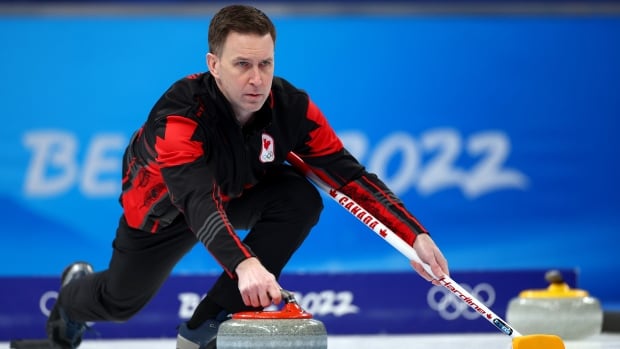 A new Olympic cycle has begun, signaling the start of a four-year grind for Canada’s elite curlers who have hopes of wearing the maple leaf at the next Winter Games in 2026.

That’s really what this has all become now – every four years curlers exhaust themselves in a relentless pursuit of being able to represent the country at the Games.

And in the curling-crazed country of Canada, it feels like there’s more pressure on the rock-throwers than any other Olympic cycle.

Canada’s place in the upper echelon of the curling world is no longer a given – Canadians have had great success at the Olympics since the sport returned to the programme in 1998 but that’s changed over the last two cycles.

Fans have become accustomed to seeing podium performances in curling at the Games. Only Brad Gushue was able to secure a medal – bronze – at the Beijing Games.

“We’re looking longer term and making sure we’re ready for March and April. And four years. We don’t want to wear ourselves out. We’re not spring chickens,” Gushue said.

“The season has gotten longer and longer. It’ll take a little bit to get our mojo going.”

There’s always a lot at stake but this time around the rings it feels different.

Mackenzie Zacharias and Karlee Burgess gush about winning the PointsBet Invitational with Jennifer Jones, Bruce Mouat helps preview the upcoming mixed doubles super series, Reid Carruthers has a new perspective after becoming a dad, and we get a live performance from St. John’s actors in the new curling musical, Second Shot.

These early days of the new quadrennial are massively interesting. In the wake of last season there was an unparalleled amount of teams splitting, shaking up the granite landscape in Canada in a way we’ve never seen before.

Rachel Homan and Tracy Fleury have teamed up with Emma Miskew and Sarah Wilkes. Jennifer Jones is now skipping the Mackenzie Zacharias world junior champion team. Kailtyn Lawes, who was third for Jones for years, is skipping her own team now.

Brett Gallant left Gushue and company to join Brendan Bottcher, Ben Hebert and Marc Kennedy. Brad Jacobs stepped away from the four-person game for at least a year.

E.J. Harnden, who played with Jacobs, takes the spot of Gallant on Gushue’s team.

Kevin Koe is now playing with Bottcher’s old front-end of Karrick Martin and Brad Thiessen – Tyler Tardi is playing third on the team. Matt Dunstone has returned to Manitoba to play with B.J. Neufeld, Colton Lott and Ryan Harnden.Reid Carruthers is skipping a team composed of Jason Gunnlaugson, Derek Samagalski and Connor Njegovan.

It’s a dizzyingly amount of changes. And the aforementioned are just a small slice of many other changes that occurred during the off-season. And perhaps there are more to come depending on how this first season plays out.

But now we’re getting our first glimpses of those newly formed teams and there are bound to be surprises as foursomes work through some growing pains.

Take for example what unfolded at the PointsBet Invitation in Fredericton a week ago.

The newly formed single-elimination format was a refreshing twist to begin the season with $50,000 cheques to the winning women’s and men’s team.

And while many expected the top-seeded Kerri Einarson rink and Gushue rink to be there in the final, it was Jones and Carruthers who surprised, knocking off Einaron and Gushue respectively in the semifinals.

They would then go onto win the championship games.

Jones, who is leading this younger team, is feeling energized and excited about what’s to come.

“It’s really exciting. If I can have an impact that makes me feel really good,” Jones said.

“I just love curling. It’s given me more than I could dream of. We’re one team. We’re all equal. They’re so selfless. They want what is best for the team. I see the fire. They remind me of me when I was their age. They’re so excited to play and practice. To me that’s what life is all about. Experiment and find ways to get better.”

Zacharias, who skipped Canada to a world junior win in 2020 and is just 23 years old, says she’s still wrapping her head around playing with Jones.

“She has such a passion and drive for curling. She has brought so much to our team. Getting to hold the broom for her is amazing,” Zacharias said.

“The first time we were on a call with her it was a little intimidating. It’s Jennifer Jones. I wanted to be like her one day. To have the opportunity to play with her is a dream come true.”

Carruthers, who has recently become a father after the birth of his son Bo, seems rejuvenated and focused with a new team and new perspective.

They knocked off Gushue in the semis and then defeated Dunstone in the final.

“I knew if we got on a roll we could win it. We were the number-five seed. We are all in a very good mental space,” Carruthers said.

Reid Carruthers and his rink defeated Team Dunstone 8-4 in the PointsBet Invitational final Sunday in Edmonton.

He admits there will be some adjusting to the new team but wants to put pressure on the rest of the Canadian teams to elevate their level of play.

“We have to hold all these other teams accountable,” Carruthers said.

Many of the teams who competed in Fredericton are now preparing for the first Grand Slam of Curling event set to take place in North Bay next week.

Things are about to get very busy for not only four-person teams but in the mixed doubles world as well.

A newly-formed mixed doubles super series has been established with the first of five events taking place this weekend at Carlton Place, just outside of Ottawa.

The event has some top Canadian and international mixed doubles teams competing at it – one of the marquee matchups has Jenn Dodds and Bruce Mouat of Great Britain taking on Brad Jacobs and Kerri Einarson Saturday afternoon.

Fans can watch the event live on cbcsports.ca and on CBC Gem throughout the weekend with the championship game slated Sunday evening at 5 pm E.T.

We’ve seen players like Laura Walker and Kirk Muyres step away from the four-person game and focus solely on mixed doubles, something many in the sport feel is going to become the norm in the coming years.

There are bound to be twists and turns and probably more team changes on the pebbled ice leading to the Winter Games in 2026.

How Clare Bronfman Spun NXIVM to Herself