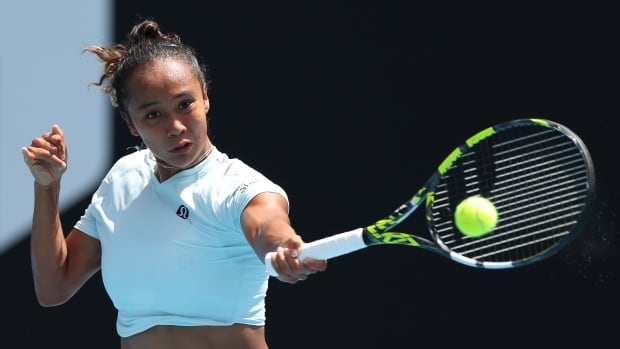 Leylah Fernandez shook off some rust and early jitters before she settled down and bounced Alize Cornet 7-5, 6-2 in first-round women’s single action at the Australian Open on Monday night.

The 20-year-old Montreal athlete trailed 2-0 and 3-1 in the first set before finding her groove en route to a 55-minute, 7-5 victory over her 32-year-old rival from Nice, France.

It took less time for Fernandez to win the second set, as she appeared to get stronger during the match while her competitor stalled after a strong first set.

Katherine Sebov of Toronto, excited to be making her Grand Slam debut in Melbourne Park, was eliminated from the tournament in 65 minutes Monday night.

WATCH | Fernandez advances to 2nd round of Australian Open for 1st time:

The Canadian qualifier, who had the difficult task of playing fourth-ranked Caroline Garcia of France — the 2022 WTA singles champion — as her opening act on the big stage, lost 6-3, 6-0 at Rod Laver Arena.

Sebov had 13 unforced errors, no aces, two double faults and only one backhand winner in the match. Garcia had five aces, 17 winners and pretty much dominated all other statistical categories.

Sebov, who turned 24 on Jan. 5 and came in at a career-high No. 191 in the WTA Tour rankings, said she was excited to play Garcia, noting before the match: “I have a game plan, and I think I have a good chance to give her a bad day.”

Canadian qualifier Sebov eliminated in 1st round of Australian Open

Toronto’s Katherine Sebov, making her Grand Slam singles debut, falls to fourth seed Caroline Garcia of France 6-3, 6-0 in the opening round of the Australian Open.

Andrey Rublev beat wild-card entry Dominic Thiem 6-3, 6-4, 6-2 on Tuesday to book his place in the second round of the Australian Open.

Thiem, a runner-up at the Australian Open in 2020 and the U.S. Open winner the same year, missed much of 2021 due to injuries but has recovered from outside the top 350 last year to a place just inside the top 100. He was given a wild-card entry by tournament organizers.

“When you see you have to play against Dominic you know it’s not going to be easy. I know he’s going through some not easy times so I wish him all the best to come back to the level he can be as fast as possible,” Rublev said.

Rublev will now play either the Australian qualifier Max Purcell or Emil Ruusuvuori of Finland.

No. 5 Aryna Sabalenka maintained her unbeaten start to the year with a 6-1, 6-4 win over Tereza Martincova. Sabalenka, who won the Adelaide International title in the first week of the year, hit 29 winners to her opponent’s seven as she won her fifth consecutive match.

“It wasn’t that easy, I’m super-happy to start with the win,” said Sabalenka, who will play American Shelby Rogers in the second round. “I have to work on my mindset and stay calm and not get too upset when I make mistakes. I really believe this is the only thing missing in my game.”

Sabalenka, who has yet to win a Grand Slam singles title, hasn’t made it past the fourth round at the Australian Open in five previous visits.

Two-time Grand Slam champion Muguruza served for the match at 6-5 in the second set.

Flags from Russia and Belarus were banned from the site of the Australian Open on Tuesday after more than one was brought into the stands by spectators on Day 1 of the year’s first Grand Slam tournament.

Normally, flags can be displayed during matches at Melbourne Park. But Tennis Australia reversed that policy for the two countries involved in the invasion of Ukraine that began nearly a year ago.

“Our initial policy was that fans could bring [flags] in but could not use them to cause disruption,” Tennis Australia said in a statement on Tuesday. “Yesterday we had an incident where a flag was placed courtside. We will continue to work with the players and our fans to ensure that this is the best possible environment to enjoy the tennis.”

One Russian flag was displayed during Ukrainian player Kateryna Baindl’s 7-5, 6-7 (8), 6-1 victory over Russian player Kamilla Rakhimova on Court 14 in the first round on Monday.

Another was offered to Russian player Daniil Medvedev to autograph after his 6-0, 6-1, 6-2 win over Marcos Giron in Rod Laver Arena on Monday night.

“I strongly condemn the public display of the Russian flag during the game of the Ukrainian tennis player Kateryna Baindl at the Australian Open today,” Vasyl Myroshnychenko, Ukraine’s ambassador to Australia and New Zealand wrote on Twitter.

“I call on Tennis Australia to immediately enforce its ‘neutral flag’ policy.”

Asked about the new flag ban, Belarusian player Sabalenka said after her first-round victory Tuesday that she would prefer that politics and sports remain separate, but understands the decision by Tennis Australia.

“I mean, if everyone feels better this way, then it’s OK,” said Sabalenka, a three-time Grand Slam semifinalist. “I have zero control on it. What can I say? They did it. OK. No flags? No flags.”

Sabalenka was among the athletes from Russia and Belarus who were barred from competing at Wimbledon and team events such as the Billie Jean King Cup and Davis Cup last year because of the war in Ukraine. Russia invaded, with help from Belarus, in February.

Russian and Belarusian players have been allowed to enter the other three Grand Slam tournaments but as “neutral” athletes, so their nationalities are not acknowledged on any official schedules or results for the event and their countries’ flags are not displayed on TV graphics.