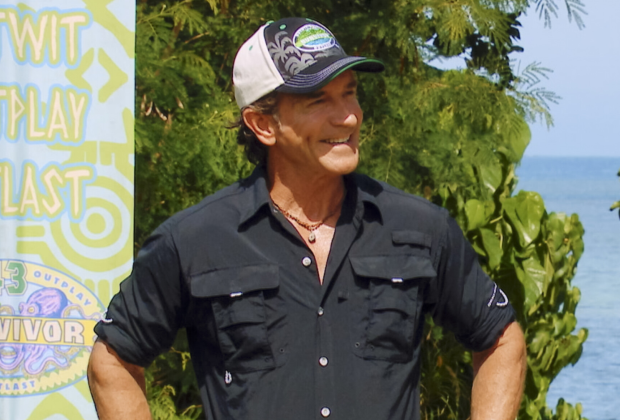 A life lesson to us all: In order to make sure things go according to plan, always create a detailed and well-thought-out list.

That’s exactly what Jesse did in Wednesday’s Survivor when he set his sights on a target, socially maneuvered to secure a fall guy and a backup plan, then masterfully pulled the trigger. But which unlucky player was his grand scheme aimed at? Let’s break it all down.

As the tribe unpacks the last two votes, there’s one particularly notable reveal from the post-Tribal segment here: Jesse reveals that everyone does (more or less) know about Karla’s immunity idol. It seemed like her beaded bracelet was the only unknown element in this entire equation, but that has, as last, been cleared up. And it does play a bit of a factor in Wednesday’s episode. But we don’t have much time to dillydally, because we’re hopping right into the night’s first challenge!

REWARD | Players must spin inside a contraption before navigating a series of obstacles and collecting a sandbag. The person to land the sandbag on top of a tall tower wins a trip to the Survivor sanctuary where they’ll get all they can eat, plus a night away from camp with pillows and blankets. Sounds worth playing for to me!

Surely enough, watching dizzy people stumble and fumble around is always funny, though I don’t envy them trying to walk across a balance beam all in a tizzy. Cody is the first person to the tower toss, but Cassidy is first to untie her rope and get started. Noelle, meanwhile, struggles big time while trying to traverse the beam. She’s near tears, but the fighter in her doesn’t give up for a single second. She finally makes it across by hopping sideways, but begins to lose suction on her prosthetic leg. It only takes her a couple tosses (that we see, at least), but she does the unthinkable and wins the challenge. It’s the ultimate comeback from behind. The ultimate inspiration. The ultimate Survivor story.

Jeff then reveals that she’ll also be getting a letter from home, and of course, she must pick three people to join her at the sanctuary. She picks Sami, Jesse and Owen.

SANCTUARY | The four players get their letters from home, and sadly due to COVID, this is pretty much the replacement for the loved ones’ visit. After they read their letters, Sami tells them he’s done flip-flopping. He wants to get Cassidy out for good, which prompts a potential plan to split six votes on Cass and Karla. Will it come to fruition?

CAMP | As the challenge losers prep their far inferior meal, they discuss Sami’s erratic gameplay. Cass and Cody talk about how Noelle is a huge threat who is slowly building quite the resume. Cass knows she needs to pull Gabler in to make anything happen, but relying on a wild card? That’s tricky business. Gabler, meanwhile, is happy to be in the middle and have options. 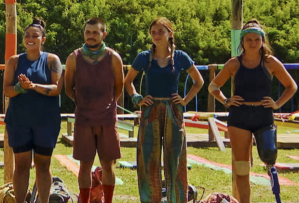 IMMUNITY IS BACK UP FOR GRABS | Probst explains the challenge, and it’s one we’ve seen before: Use one hand to hold a platform steady, while simultaneously creating and stacking a house of cards that can reach the red arrow above it. And based on the montage of houses falling, this challenge looks miserable. Cassidy gets incredibly close on multiple occasions, only to watch her efforts continuously crumble. But like Noelle, she doesn’t give up and she goes on to win that powerful immunity necklace.

STRATEGY | With Cass immune, the attention turns to Karla, however, no one seems to trust Sami. Despite the fact that Noelle chose Jesse for the reward, he knows he can’t play emotionally. According to him, Noelle always bounces back after a loss (Justine, Dwight), and he knows she has it in her to eventually cut him. Jesse then starts working on a checklist: 1) Have a cover story… to tell Noelle. 2) Throw a fall guy under the bus… Sami. 3) Have a backup plan… the AlliGabler.

But in order for his plan to work, he needs Noelle to enact her own plan and split the votes. He also needs Gabler to write Noelle’s name down. But Gabler’s no slouch. He knows Jesse and Cody are running the show, and he talks to Karla about “the real power couple” in the game.

TRIBAL COUNCIL | After giving Noelle more props for being an absolute beast, the topic of trust is discussed. Owen says he hopes the plan he’s in on is the one that goes down, but since you can’t trust anyone in this game, who knows? Cody says strategy changes from person to person, hour to hour, and people’s body language changes minute to minute. There’s also talk about people playing like silent assassins (which let’s be real, it’s been a season of quiet moves — nothing super flashy here). Nevertheless, it’s time to vote.

Jeff calls for advantages and as the camera zooms in on Karla, she maintains her poker face and doesn’t play her idol. But when all is said and done, she remains safe and Noelle is voted out with five votes to her name.

Was the tribe right to give Noelle the boot? Who’s playing the best game right now? Drop some comments to let us know.

DANIEL FUSCO: Three Tools to Thrive in Seasons of Stress