Since the first AstraZeneca vaccine against the coronavirus pandemic (COVID-19) was injected into the arm of a Nigerian man in March 2021, millions of vaccine doses have been administered across the country.

NPHCDA said 55.2 per cent of the total eligible population targeted for COVID-19 vaccination are fully vaccinated. In the same vein, 9.3 million persons have taken the booster vaccine across the country.

From the early days of the pandemic, the toughest decisions about how to combat the virus fell on health officials and state leaders. The government, through NPHCDA, with support from partners, implemented strategies ensuring all eligible Nigerians have access to the COVID-19 vaccine.

“The fight against COVID-19 is not over,” Faisal Shuaib, the Executive Director of NPHCDA, said on Monday. “Three years after the coronavirus emerged, a new variant, XBB.1.5 is quickly becoming the dominant strain in parts of the United States and has been detected in at least 28 other countries.”

Before the new variant arrived, the NPHCDA adopted the integrated approach (SCALE 3.0) which is integrating COVID-19 vaccination with the Non-Polio supplementary immunisation activities (NPSIAs) campaigns, Routine Immunisation (RI) services and Vit A supplementation.

“This SCALE 3.0 approach guided the improvement of the COVID-19 vaccine uptake across the country,” said Chika Offor, the Chief Executive Officer of Vaccine Network. “The numbers are going up because of this integrated approach,” she told PREMIUM TIMES, calling on the government to create more awareness of the vaccine in all quarters.

The vaccination gap among states has narrowed, but key differences still exist, illustrating that some states have done better than others.

The top five performing states are Jigawa; Nasarawa; Kaduna; Osun and Kano states. These states have met the 100 per cent targeted population for the COVID-19 vaccination.

Other states across the country including the FCT have vaccinated between 13 and 46 per cent of their targeted population. 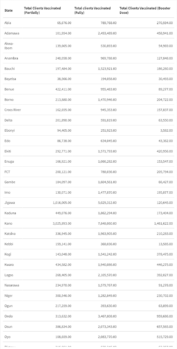 This was followed by Jigawa with 5 million people fully vaccinated. Ondo is behind with 3.4 million; Adamawa with 2.4 million; and Rivers with 2.2 million.

Lagos, Nigeria’s most populous state and the epicentre of the virus has only vaccinated 2.1 million of its eligible group.

Concerning the states with low performance, Ms Offor, the Vaccine Network official, noted this has to do with human behaviour.

“There are some people that don’t believe in the vaccine,” she said. “Not necessarily that they don’t want to take it but they won’t go out of their way to take it.”

This, she said is why the government should deploy a strategy to take the vaccine campaign to people’s doorsteps. “People are getting fatigued about it, some will say they cannot pay for transport to go and get the vaccine but when you take it to their doorsteps, they will collect.”

“That is why all hands need to be on deck, we must not give up,” Ms Offor added. “We have to continue creating awareness to increase the vaccine performance, especially in the bottom states.”

The South-west is trailing with 11.6 million of its eligible population fully vaccinated while 1.58 million are partially vaccinated.

More than 10 million people in Nigeria’s north-east have been fully vaccinated.

Meanwhile, 7.8 million people in the country’s north-central have fully received the vaccination while about 1.9 million people are partially vaccinated.

About 700,000 people are partially vaccinated in the South-east and over 1 million people in the South-south.

In Nigeria’s capital, Abuja, 788,036 people have been fully vaccinated and 200,121 persons are partially vaccinated.

(This report was produced with the support of the Centre for Democracy and Development).

‘Are You At All Embarrassed By What You Do?’