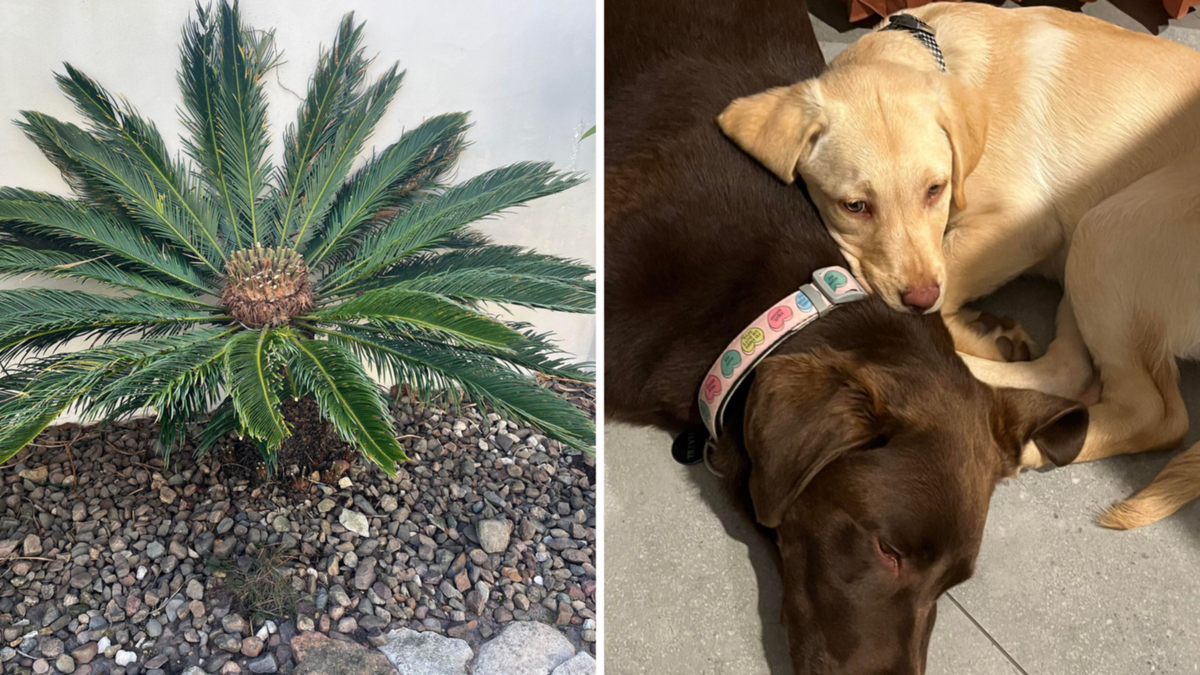 A Queensland mother is urging pet owners to check their gardens, hoping it may save a pet’s life, after her young puppy died from eating a toxic sago palm plant.

Vets warn that animals ingesting something they shouldn’t is the cause of around half of their patients.

Watch the latest news and stream for free on 7plus >>

Katrina Dawson and her family had left their two dogs, Hazel and Margot, outside in the yard for a few hours and noticed Margot was “a little bit lethargic” when they came back inside.

Margot became increasingly unwell, prompting the family to take her to the emergency vet. After a few days at the vet followed by a few days at home, she died.

Dawson is urging pet owners to take a closer look at their garden, after discovering the cause of Margot’s death was a sago palm seed she’d ingested from the garden.

Sago palm plants are extremely toxic to animals and can cause liver failure.

“I don’t think a lot of people know anything about it, I certainly didn’t,” Dawson said.

Dawson said she “had no idea” the plant was one she should keep away from the dogs.

“I knew about toxic plants and all that, I knew about ‘don’t feed your dog grapes or chocolate’ or about ticks, I knew snakes, I knew all that stuff,” she said.

“I thought I was pretty educated.

“But I didn’t realise how bad this particular plant is and we have four of them in our fenced-in yard. That’s what got me.”

When you have a safe fenced-in yard, Dawson said, you expect your animals to be safe.

“Puppies chew everything, you can’t do anything about it,” she said.

After speaking to friends with pets, Dawson said many didn’t know or even had the same plant in their yard.

“They’re beautiful palms and there’s a place for them, just not in yards where there are animals,” she said.

“We’ve ripped ours out, totally gotten rid of them and replanted.”

The family wants to ensure Hazel is safe.

“I don’t want to go through this with her,” Dawson said.

“I want other people to be aware, when you’re buying these plants, you need to know what’s in your garden.

“Unfortunately we bought the house in June and the garden was well-established, everything was there, so we just didn’t know.”

“I noticed she’d thrown up and I thought ‘well obviously she’s feeling a little bit off,” Dawson said.

“Later on it just got worse, she just kept vomiting and she just was so tired.

“All she wanted to do was sleep. For a puppy that’s a big red flag.”

Veterinarian Dr Sureiyan Hardjo said sago palms are one of the main plants pet owners should keep an eye out for.

“It’s one of those things that we always ask,” he said. “Do you have any plants that look like palms?”

Cycad plants are extremely toxic to dogs, so “it’s better to be safe than sorry if (you) see (your) animals chewing on a seed”.

Hardjo warned other parts of the plant can be toxic too.

Blue-green algae is also a major toxin, as are mushrooms and the yesterday today tomorrow plant, also known as kiss me quick.

If you suspect your animal has ingested something they shouldn’t have, Hardjo said it’s best to get them checked out straight away.

You know your pet better than anyone, he said, and if you think they’re not acting like themselves you should trust your gut.

While pet owners may think they’re overreacting, it’s best to be overcautious.

Animals can lose a large percentage of liver function in a short time if action isn’t taken immediately, so acting fast is vital.

Watch what they chew

“Half of our patients that come through emergency have some sort of (gastrointestinal) upset,” he said.

While plants like sago palms are toxic, they can also cause intestinal obstructions.

Nuts and seed pods can cause intestinal obstructions or a physical blockage, Hardjo said.

“Chew toys can also cause obstructions,” he said.

Dawson and her family brought Margot home on December 1 to be a friend to three-year-old Hazel.

“She got into everything. If I left my door open she’d bring out whatever clothes I’d left out, bring them downstairs to me.”

Dawson said Margot was so smart she could watch Hazel do a trick, and get the inevitable treat, and immediately copy it so she could get a treat too.

“She was very very loving, she had to be by my feet,” she said.

“She always had to be touching either me or Hazel.

“She was just lovely. She was beautiful.”

Denial of responsibility! Yours Bulletin is an automatic aggregator of the all world’s media. In each content, the hyperlink to the primary source is specified. All trademarks belong to their rightful owners, all materials to their authors. If you are the owner of the content and do not want us to publish your materials, please contact us by email – [email protected]. The content will be deleted within 24 hours.
AnimalsHealth & WellbeinglifestyleNewsPetspublic healthQueensland NewsSunshine Coast
0
Share

Who is Edward Tian? He wants to keep his GPTZero app free for users to take on ChatGPT