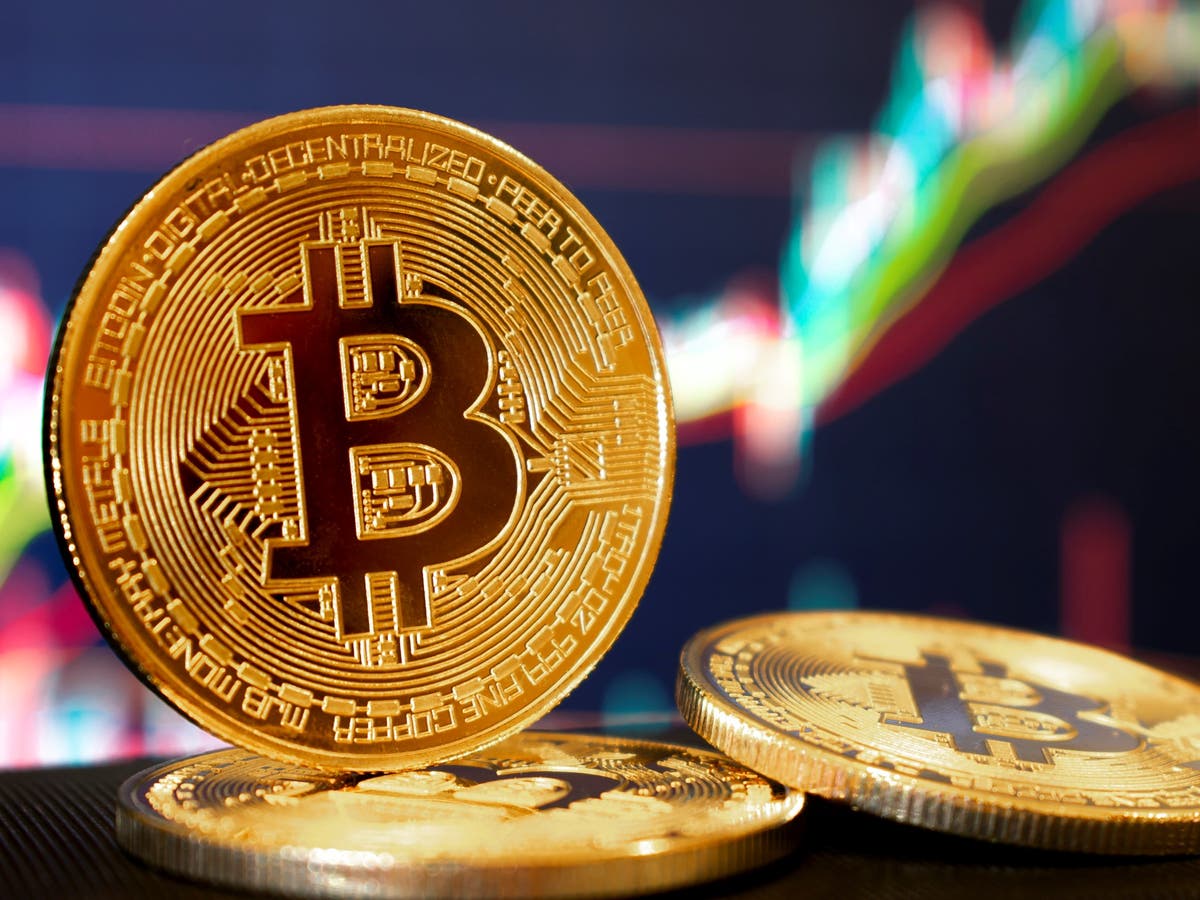 The price of bitcoin has risen back above $58,000 pm Thursday following a bumpy few days for the cryptocurrency.

The mini revival for BTC has had a positive impact on the overall crypto market, which is up roughly 2 per cent over the last 24 hours, with Ethereum (ETH), Binance Coin (BNB) and Solana (SOL) all surging by around 5 per cent since Tuesday.

Of the top 10 most valuable cryptocurrencies, Cardano (ADA), Solana (SOL) and Polkadot (DOT) bucked the trend by suffering losses of between 1-4 per cent since yesterday.

The biggest gains came from Binance Coin, which rose by 7 per cent.

The mixed performances leave the crypto market in a kind of limbo, with analysts divided over whether it has lost its momentum after hitting an all-time high earlier in November. Some believe it is entering a bearish phase, while others claim the latest dip will precede new record highs before the end of 2021.

You can follow all the latest news, analysis and expert crypto price predictions right here.

A closely followed bitcoin price prediction model that puts the cryptocurrency on a course to reach $100,000 and beyond this market cycle is “still on track” despite the latest dip, according to its creator.

Pseudonymous Dutch analyst PlanB noted that the floor model he predicted back in June will likely miss the $98,000 target set for the end of November, however his stock-to-flow (S2F) model remains intact.

“S2F model not affected and indeed on track towards $100k,” he wrote on Twitter, where he has amassed more than 1.5 million followers over the last year.

(You can read all about the PlanB’s S2F model right here.)

Figures from on-chain and social metrics platform Santiment show that over the last seven days, while BTC was floundering below the $60,000 level, bitcoin addresses holding between 100 to 10,000 bitcoins have added roughly 59,000 bitcoins ($3.4 billion) to their holdings – representing 0.29 per cent of the total circulating supply.

Bitcoin whales accumulating crypto is typically a sign that they are bullish about the price trajectory of the cryptocurrency.

Ethereum has also grown by about 2 per cent in the last 24 hours and is currently valued at about $4,300.

However, other leading cryptocurrencies, including solana and cardano have dropped in value by 1 to 3 per cent while polkadot and dogecoin remeain nearly unchanged in the last day.

The overall crypto market shows signs of growth, increasing in value by about 1.5 per cent in the last 24 hours, and is currently valued at about $2.6 trillion.

Bitcoin’s network activity is currently looking bullish, according to one analyst, who claims the cryptocurrency is “looking seriously cheap” at $56,000.

The Advanced NVT Signal is aimed at monitoring investor habits by dividing bitcoin’s market cap by the 90-day moving average of network transaction volume. The last time it was this low it preceded a record-breaking price rally.

“Expecting a strong reaction in the not too distant future,” Swift tweeted.

Ethereum better than bitcoin for investors?

This is the claim of a recently uncovered research note from the US banking giant JPMorgan Chase.

With Ethereum (ether) once again on the rise today, its market cap has re-overtaken that of JPMorgan’s and is now north of half a trillion dollars. The gains can be attributed to its underlying technology, according to the report, “with Ethereum deriving its value from its applications, ranging from DeFi to gaming to NFTs and stablecoins”.

Ethereum has already massively outperformed bitcoin in 2021, with a price increase of more than 500 per cent compared to bitcoin’s more modest 96 per cent rise.

Lord of the Rings-themed cryptocurrency shut down

A cryptocurrency that called itself “The One Token That Rules Them All” has been put to an end after the estate of J.R.R. Tolkien lodged a complaint with the World Intellectual Property Organisation (WIPO).

Tolkien’s estate claimed the JRR Token cryptocurrency, which launched in August, infringed on its Lord of the Rings trademarks.

The creator of the Florida-based altcoin claimed any similarities to the fantasy book series are purely coincidental – as you can see from this screenshot from the now-defunct jrrtoken.com (captured by Arstechnica before it was taken down).

Reports that the Indian government is planning to introduce a bill to ban certain cryptocurrencies has caused bitcoin and other altcoins to plummet in price on local exchanges.

BTC, Ethereum (ETH) and dogecoin (DOGE) have all fallen by between 15-20 per cent against the Indian rupee following the introduction of the draft Cryptocurrency and Regulation of Official Digital Currency Bill.

The head of domestic trading app WazirX called for calm among investors, tweeting: “All of us want regulation… We need to have faith in our law makers.”

The leading cryptocurrency has dropped in value by over 4 per cent in the last week.

The overall crypto market appears to be stabilising, almost remaining unchanged in value in the last 24 hours.

It is currently valued at about $2.56 trillion, nearly the same as its value a day earlier.

Cardano is down by over 8 per cent in the last week, while solana is closer to its value seven days earlier.

Meme coins doge coin and its spinoff cryptocurrency shib inu are also down between 4 to 15 per cent in the last week.

While there are some signs of recovery of the crypto market, the chart still looks mostly red.

Is El Salvador’s plan to build the volcano-powered Bitcoin City the beginning of ‘hyperbitcoinisation’ or simply hyperbole?

You can read all about it by signing up to our free weekly IndyTech newsletter, which covers everything from updates on the state of the International Space Station to the latest cryptocurrency news. To sign up click here and scroll down to the tech icon.

The latest breaking news, comment and features from The Independent.

Here’s a teaser from this week’s edition:

Amid a flurry of fireworks, blaring rock music and cheering crowds, the president of El Salvador took to the stage at LaBitConf 2021 conference over the weekend to unveil his vision for a volcano-powered ‘Bitcoin City’.

As arguably the world’s least conventional world leader, Nayib Bukele is as disruptive and divisive as bitcoin itself. The self-proclaimed “coolest dictator in the world” and “CEO of El Salvador” oversaw the country becoming the first in the world to adopt the cryptocurrency as a legal form of tender earlier this year, and has plans to begin a revolution not just in his country, but the entire world.

Decked in all white and wearing his trademark backwards baseball cap, Bukele used Alexander the Great as an analogy for what he was hoping to achieve with Bitcoin City. “When Alexander the Great was conquering the world, he established these Alexandria cities all over the empire,” he told the crowd. “The whole point of these Alexandrias was to be the beacons of hope for the rest of the world. I thought, if you want bitcoin to spread all over the world, we should build some Alexandrias. We should build the first Alexandria here in El Salvador.”

Built in the shadow of the Conchagua volcano on the country’s southern tip, Bitcoin City is envisioned as a kind of libertarian utopia crossed with an environmentalist’s fantasyland, combining zero income and property tax with zero CO2 emissions.

It will be a proper legal municipality, complete with an elected mayor, residential and commercial areas, museums, airports – “everything devoted to bitcoin” – even a plaza designed in the shape of the cryptocurrency’s logo.

To finance the city, El Salvador partnered with digital assets firm Blockstream to launch a $1 billion bitcoin bond, with the company saying the city will bring about the acceleration of “hyperbitcoinisation” – a bold new era where the cryptocurrency usurps the US dollar to become the default value system of the world.

Bitcoin evangelicals like Bukele cite the digital currency’s borderless, censorship-resistant technology for its potential to displace the dollar and transform the current financial system into one that favours the masses, not just the massively wealthy…

Bitcoin is now down more than $10,000 from the peak it reached on 10 November, with still no solid signs of the price slide stopping.

Speaking to various analysts and experts, we heard their thoughts on what caused this latest price correction – and where the cryptocurrency might go from here. Reasons range from the US infrastructure bill, to the liquidation of MtGox assets that account for more than 3 per cent of the entire circulating supply of BTC.

Amazon’s New Echo Auto Alexa For Your Car in Detail