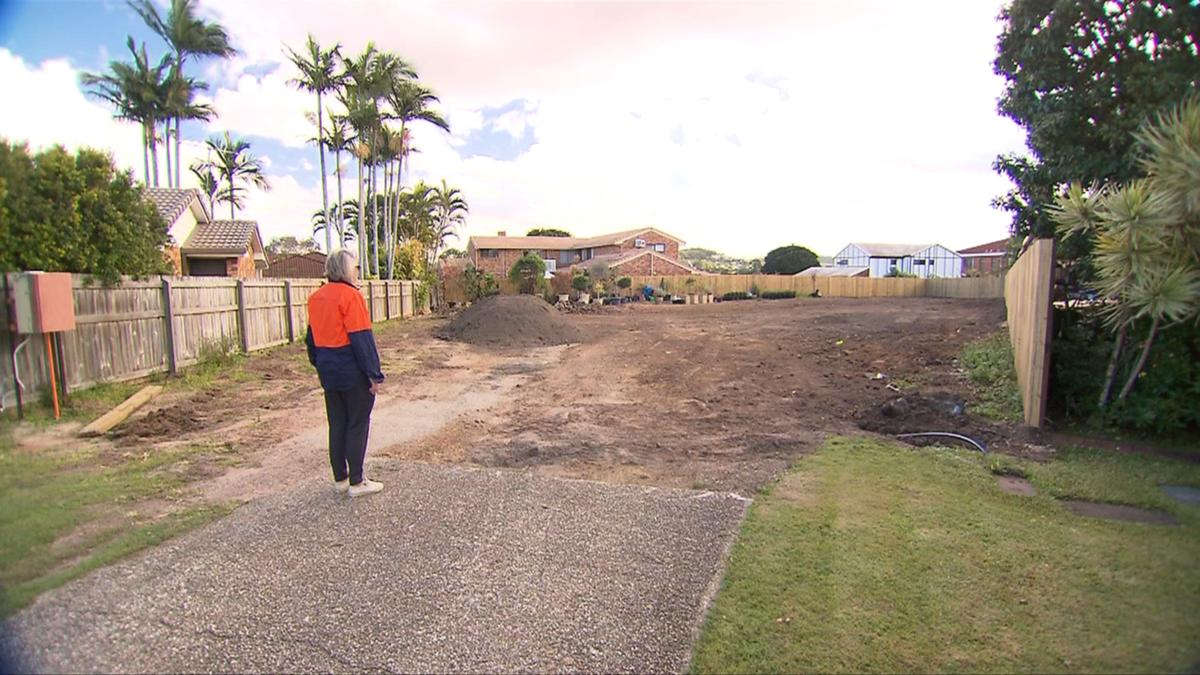 Louise* admits she was “caught out”.

What was going to be a dream home for her and her husband to live out their twilight years is now a dirt-covered plot of land.

And a money pit. She’s lost hundreds of thousands of dollars.

Louise bought the house in Brisbane’s south east last year with the intention of renovating it.

However, when her builders began knocking down walls, they made a devastating discovery: a massive infestation of termites.

“Every wall was eaten from the bottom up to the roof,” said Louise, who 7NEWS.com.au has chosen not to identify.

In other words, the house “was not able to be saved”, Louise said.

“We’ve had to demolish the home. We just couldn’t save it at that cost,” she said.

So why wasn’t the problem discovered earlier?

According to Louise, she felt pressured for a clause in the sale contract stipulating a requirement for a building and pest inspection to be removed.

“They insisted that we could not because, they said, that there were so many buyers,” she said.

“They said we would miss out on the property, because they had someone offering $100,000 more (who they would sell to) if we didn’t take the clause off at that moment.

“That was just pressure.”

Kylie Newman, a conveyancing law expert at McCarthy Durie Lawyers, said the practice of building and pest inspections being removed from sale contracts has become more common during recent years amid frenzied demand for property.

“It’s not an uncommon clause to be waived, particularly in the most recent market where there were significantly more buyers than properties,” she told 7NEWS.com.au.

“In a lot of instances, buyers have become emotionally attached to the property.”

She said the only reason not to have a building and pest inspection included in the contract would be if the buyer had arranged it themselves prior to the sale.

“However, the practical aspect is clients will waive those rights if they consider that the risk is low and if they’re intending to knock the property down and aren’t too worried about it,” said Newman.

However Louise warns that buyers needs to be diligent even if they do get a building and pest inspection.

She claims two building reports she had done – after she bought he property – ahead of renovations indicated there was only “little bits” of termite infestation.

She said she’s been told it will be two years until their house is built.

“The consequences are huge, especially if you think you’re going to live in it,” she said.

“We just got caught out with this.”

* Not her real name.

Denial of responsibility! Yours Bulletin is an automatic aggregator of the all world’s media. In each content, the hyperlink to the primary source is specified. All trademarks belong to their rightful owners, all materials to their authors. If you are the owner of the content and do not want us to publish your materials, please contact us by email – [email protected]. The content will be deleted within 24 hours.
BusinesshousingHousing marketLaw and orderlifestyleNewspoliticsQLD News
0
Share

TfL Tube strike – live: Disruption to continue across London until mid-morning on Wednesday

Frankie Dettori: ‘Hearing the crowd shout my name is a very selfish buzz, but God I…

Scaling Up Your Freelancing Career to a Small Business

The Best Skin-Care Treatments for Melanin-Rich Skin, According to Dermatologists