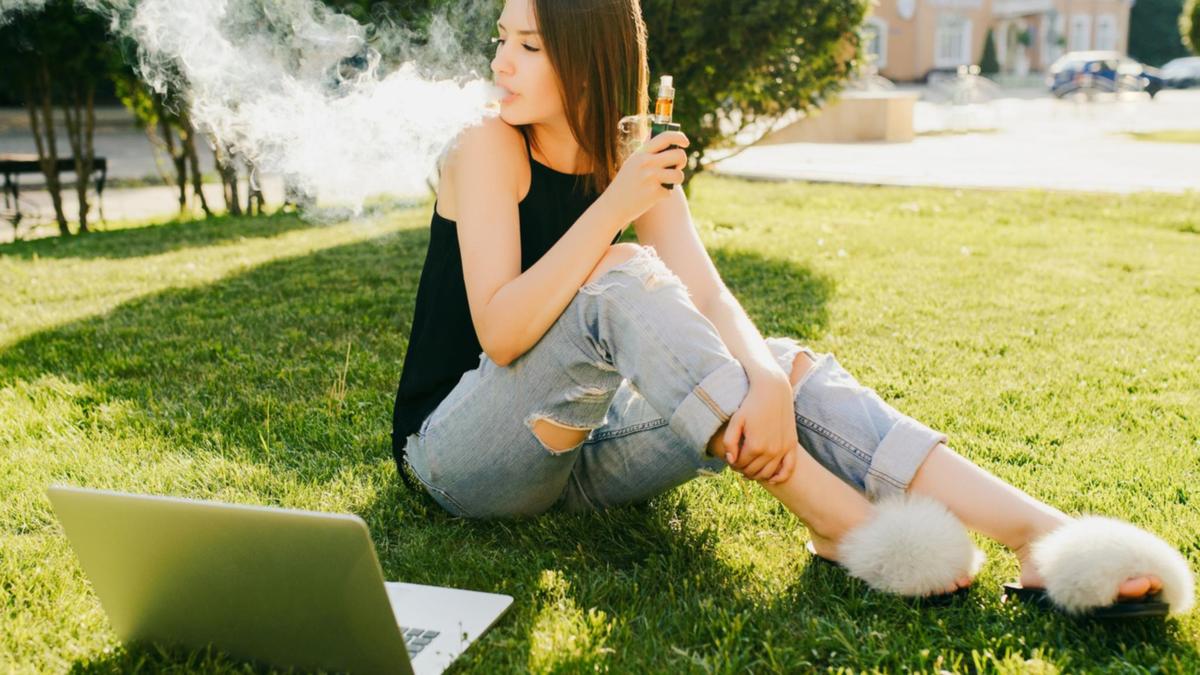 In some instances children as young as 14 say they have become addicted to nicotine despite government efforts to heavily restrict the accessibility of vapes.

Many tobacconists across Australia now sell disposable vapes under the counter and delivery services have sprung up on social media in many cases directly targeting young people.

One of those lured in by the easy access was 17-year-old Ruby, who told ABC’s Four Corners she was just 14 when she began to become addicted to nicotine.

“I don’t want to be like a massive snitch, but it’s actually super easy,” she said.

“You go on your phone, you’re like ‘Can I pick up a vape?’ and they’re like ‘20 minutes’. And you just meet them somewhere and they just hand it to you,” Ruby said.

In October last year, Australia introduced a world-first model requiring a prescription to access nicotine vapes in the hope of reducing access not just to young people, but the broader community.

Dr Colin Mendelsohn, who specialises in helping patients quit smoking using vaping, says the prescription model hasn’t worked due to being overly difficult to access and has created more demand and growth in the black market.

“The government’s set up this complex system which just isn’t working; to find a GP who will prescribe and then to find a pharmacy that will sell it – it’s just not a workable solution,” Dr Mendelsohn said.

Shane Kerrigan is the owner of iVape, which has operated since 2011 and runs two legal vape shops in Queensland.

He says since last year’s clamp down on nicotine vapes, the black market has “blown up out of control”.

“People would rather now just walk into one of these illegal shops and buy a nicotine vape across the counter than go to the vape shop and work out how to do it properly,” he said.

Having followed the government’s rules and tight regulations on vaping, Mr Kerrigan is now being forced to close down one of his stores while illegal vape operations down the street thrive.

Since the restrictions on nicotine were introduced, Mr Kerrigan says he has lost $400,000 in revenue and been forced to fire five employees.

He believes the government had failed to police its own regulations.

“It’s all because of the government’s inability to police their own bullsh*t. Why would you create a model and then not set up the infrastructure in the background to police that model?”

As a “prescription medicine” the responsibility for policing illegal vapes sold through tobacconists or online largely falls to state health departments with assistance by state police.

The federal Therapeutic Goods Administration overseas large scale importation, manufacturing and advertising of illegal vapes. However, how individual states and territories enforce the laws, including whether through the health department or police force, is up to them.

In NSW, the Health Department is the lead agency for policing illegal vapes, although NSW Police said they did collaborate on enforcement and if they received a report, had the power to “investigate and take action”.

Last month, NSW Health revealed it had seized more than $1 million worth of illegal e-cigarettes and liquids since January, taking the total figure seized since July 1, 2020 to over $3 million.

“We are cracking down on the illegal sale of nicotine e-cigarettes and liquids and taking a zero-tolerance approach to those who sell them,” NSW chief health officer Dr Kerry Chant said at the time.

“You will be caught, illegal items will be seized, and you could face prosecution, resulting in being fined or even jailed.”

The maximum penalty for the illegal supply of liquid nicotine in NSW is $1,650 or six months’ imprisonment, or both.

Despite these measures, young people are still able to get their hands on nicotine vapes and more adult vape smokers are choosing the high nicotine illegal disposable option, too.

“You don’t have any choice with these disposables,” Dr Mendelsohn said.

“They’re mostly five, sometimes six per cent, which is ok for some heavy smokers who want to quit, but it’s really not necessary for most smokers, and certainly for kids, it’s far too much.”

Professor of Epidemiology and Public Health at the Australian National University Emily Banks led a recent study into the harms of vaping, commissioned by the Australian government.

The study found there were health risks both known and unknown associated with vaping and raised alarm to the potential for a new generation of young people to become addicted to nicotine.

It noted 32 countries worldwide had completely banned vapes and e-cigarettes, including Japan, Switzerland, India and Mexico. Another 84 countries had no regulations at all and 79 countries, including Australia, regulated to varying degrees.

“What (Australia’s) regulator has said is, ‘We want to target this use to the people that are using it to quit smoking and we want to avoid use in non-smokers,’” Professor Banks said.

Dr Mendelsohn fears the risk of teenagers taking up vaping will result in the government banning them outright, which he says will only make the problem worse.

“People are not going to just suddenly get on with their virtuous lives and do the right thing that you always want them to do; they’ll still do it in their own way,” Dr Mendelsohn said.

“Bans just send it underground and make the black market thrive and the criminal gangs move in. You don’t reduce the use, you just make it less safe.”

Denial of responsibility! Yours Bulletin is an automatic aggregator of the all world’s media. In each content, the hyperlink to the primary source is specified. All trademarks belong to their rightful owners, all materials to their authors. If you are the owner of the content and do not want us to publish your materials, please contact us by email – [email protected]. The content will be deleted within 24 hours.
australiaFitnessHealth & WellbeinglifestyleNewsTAS News
0
Share

Max out friendship with the new Pokémon and…

How a single red spot misdiagnosed as sunburn…