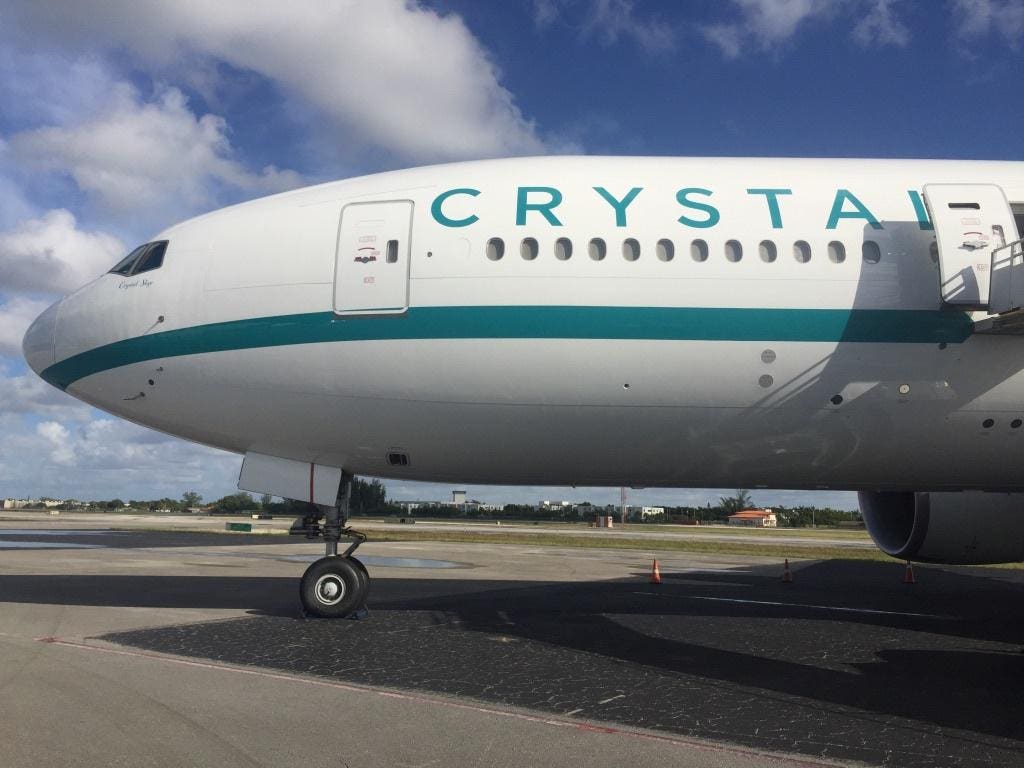 After being grounded during the shutdown of parent Crystal Cruises, the luxury Boeing 777 Crystal Skye is flying high again. It is now operating charter flights for the Saudi-backed upstart LIV Golf tour, which describes itself as “golf, but louder.”

Several websites and media broke the news by reposting a TikTok video by @michaelfarley1976. It showed golfers, their caddies and companions partying to Queen’s “We Are The Champions.” A passenger can be heard saying, “Holy smolley.”

The New York Post identifies one of the celebrating golfers as Pat Perez, who earned $900,000 despite finishing in a tie for 29th place during the tour’s most recent event, held at Pumpkin Ridge in Portland, Oregon. The next event is scheduled for the end of July at Trump National Golf Club Bedminster in New Jersey. Future dates include Boston and Chicago in September, followed by Bangkok, Jeddah and Miami in October.

According to one person with knowledge of the charter agreement, LIV has booked more flights on the giant jet.

FlightRadar shows its most recent flight was from Shannon, Ireland, to London’s Gatwick Airport earlier today. On July 1st, it flew from Miami’s Opa Locka Executive Airport to Portland International Airport in Oregon before flying to Ireland the next day.

It is now being marketed by Comlux Aviation, which specializes in VIP Airliners and operated the airplane during its Crystal days. VIP Airliners are aircraft usually made for use by the airlines, typically carrying hundreds of passengers, but instead configured as private jets. The most deluxe are often for billionaires and royalty and feature private offices, bedrooms and even showers.

After entering service for Air Austral, a French airline based in Reunion, in 2011, this 777 was bought by Crystal. It had plans to launch private jet tours like those offered by Abercrombie & Kent, Four Seasons Hotels & Resorts, and recently Disney. While that idea was dropped, it ended up serving the group charter market, including sports teams and was used by the NHL for an exhibition trip to China.

Reconfigured with 88 first class seats that convert to flat beds, its signature feature is a large lounge area in the forward section behind the cockpit with a stand-up bar, a pair of couches and four dining tables, each seating six. There is a buffet in the middle of the cabin dividing the tables.

In addition to a complement of three to four pilots, it’s staffed with 12 flight attendants, an executive chef and an operations manager. The widebody jet has plenty of space for golf clubs, with room for over 500 pieces of luggage. There is inflight WiFi so you can always be connected, and it has a nonstop range of 10,000 nautical miles.

Golf.com wrote of the ride, “If guaranteed prize money didn’t seem like payment enough, wait until you see how LIV golfers travel.” It noted, “With minimum earnings being north of $100,000 for each LIV event, no cuts and travel expenses covered, LIV caddies are earning more than most professional golfers.”

Denial of responsibility! Yours Bulletin is an automatic aggregator of the all world’s media. In each content, the hyperlink to the primary source is specified. All trademarks belong to their rightful owners, all materials to their authors. If you are the owner of the content and do not want us to publish your materials, please contact us by email – [email protected]. The content will be deleted within 24 hours.
boeing 777Crystal CruisesLIV GolfLuxury travelprivate jetPro Golfpro golfers private jetsVIP Airliner
0
Share

Organisers call for entries ahead of 19th edition