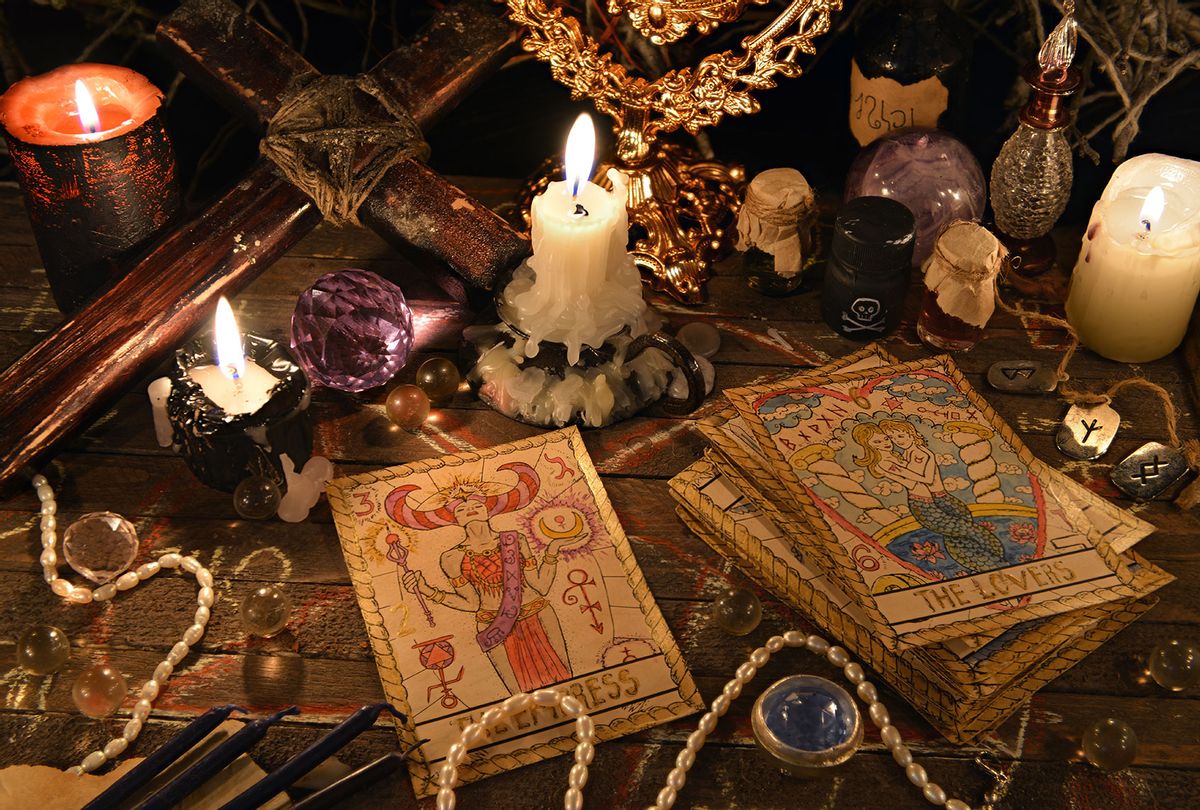 I saw on Facebook that a local witch was holding a healing event for Halloween. I’d relocated to Los Angeles for a fresh start, but was haunted with depression. I was still reeling from a falling out with a spiritual community after revelations of power abuse had surfaced, along with a breakup — two relationships with abrupt endings I couldn’t shake. I drove to her bungalow on a street lined with cars. The door opened to a woman about my age in a swirly dress.

Though the stereotype of a witch is someone in all black cackling from a Disney cartoon, real witches are pagan, members of an earth-based spirituality honoring nature and women. They commune with the spiritual plane directly, free of mediators and are said to be one of the largest growing paths of spirituality in America. I’d been raised loosely Methodist in Upstate New York, each pastor I’d ever met a man. My ancestors, of Celtic descent, once practiced Halloween as Samhain, a spiritual day when the veil between the worlds of the living and dead was the thinnest. Maybe here I could reclaim that lost connection.

Inside the bungalow twelve women sat in a circle. For the ceremony we each had to bring a photo of a dearly departed loved one. I brought a picture of my grandmother in the 1940s, pin-curls under a white nurse’s hat.

“Feel their presence,” the witch said. I was surprised to be hit with anger. I remembered a story about my grandmother: she loved her job but was expected to give it up when she got married to follow my grandfather. It was something that haunted her at the end. She felt she’d given away her power. Had I accidentally done the same?

RELATED: An ordinary girl born into a family of witches

My ex had been a meditation teacher. I met him as a student in his group. When he ended it, already dating another student in the community, he told me to disappear and not come back. I listened. But I also lost part of myself. Seeking healing, I’d then gotten involved with several yoga centers, where later leaders were revealed to be abusing their power. I was learning, alongside the wisdom, there was a history of this behavior among some gurus of yoga, meditation and other spiritual communities. I was frozen in confusion — how could places of healing be so rife with pain?

The witch lit a purple candle and laid Tarot-like cards out on a table.

I flashed to another time I’d sat in a circle like this. As a teenager, my two younger girl cousins and I sat in a ring as I read healing practices from a book. I asked them to lie down as I passed a quartz crystal hanging from a string over them.

“It’s moving!” I exclaimed, writing down the direction and shape of the swing to later analyze, tracking their energy. I was a good beginner practitioner: I helped them see where they were closed off and where they were open.

“It’s your heart center,” I said, reading from the book solutions from nature — like other rocks to hold or colors to wear — to bring back balance. After, we went for a walk through the autumnal Northeast woods, remarking on the brilliance of nature’s letting go — all fiery orange as we listened to the punk ballads of Bikini Kill’s “Revolution Girl Style Now!” on our cassette players. I’d felt whole. Perhaps letting go was easier then. As an adult, I was still holding onto my ex story, letting him affect my spiritual path.

The witch explained that witches offer an archetype of feminism in the age of patriarchy. Here, the teachers we follow are our own inner selves. Once, I’d listened more closely to my inner knowing. When had I wavered? She let out a primal yell. We were asked to follow. I felt strong as I howled.

That night I drove home from the witch’s house in a full moon and decided to keep going. I pulled up to the Pacific and took out a notebook. I’d been trying to write a list of what I wanted. The truth was, I hadn’t known what to say. I performed a ritual of my own, ripping up the paper and starting a new list in the moonlight. I wanted to write. Teach. Find love but not lose myself. Get my power back and keep it for good. But I wasn’t sure how.

Six months later I reconnected with an old friend and we fell in love. Two years into that relationship, I was accepted to a graduate program in New York. He said he’d follow me. Unlike my grandmother, I could be the one leading the way with someone who loved me willing to follow. An old Brooklyn friend told me she was moving out, and would I want her apartment? Plus, she said, it came with a bonus. Her neighbor was wonderful, a witch who taught about feminism.

Driving across the country, we listened to riot grrrl bands, the epic songs from when I’d been a teenage witch.

Later, when my ex reached out to me, I blocked him, having learned that boundaries, too, are a magic spell. I found a new yoga community I trusted and invested in therapy.

But it was what the witch had taught me — about honoring my own inner voice and prioritizing it — that helped the most. This was the real lesson. Focusing on assignments for graduate school, with each word I was building my body both backward and forward in time, to when it knew its own worth. The words we write are also a magic spell.

This Halloween, I’m thankful to the witches for modeling true agency. But now I know better than to put them, or anyone, on a pedestal. This strength is coming from within.

More stories about witches and power:

How to use a Panasonic Lumix Camera As a Webcam