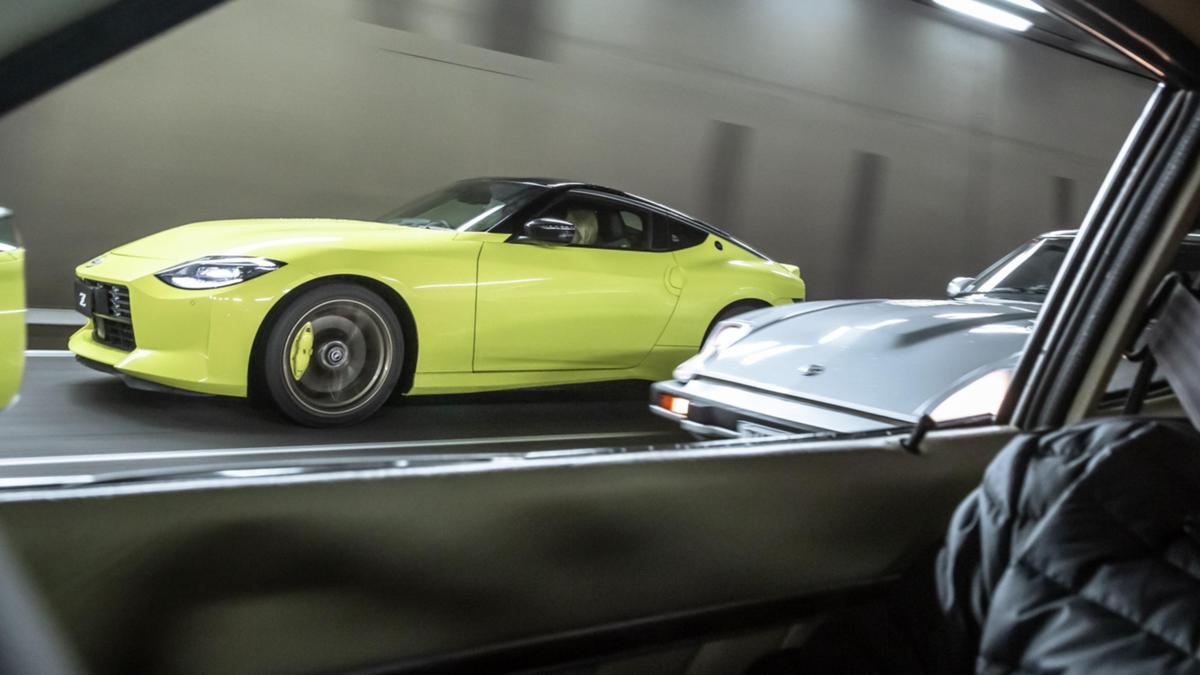 The new Nissan Z coupe launches in Australia later in August, but to tide us over the company’s Australian division has staged what it calls a “family reunion” in Sydney.

A bright yellow Z Proto Spec (sold out as of May this year) was joined by a green Datsun 240Z, bright blue Datsun 260Z, silver Datsun 280ZX, dark blue Nissan 300ZX, silver Nissan 350Z, and silver Nissan 370Z – not quite the final word in diverse colours there…

Nissan is intent on reminding Australia’s car enthusiasts of its long heritage with sports cars. The company has previously hosted Z meets at its regional headquarters, and puts work into maintaining links with the Z fraternity.

For more Motoring related news and videos check out Motoring >>

The vehicles used here came from the Z Car Club of NSW.

“This is a proud moment. Few models can claim the performance lineage of the Z, and to be able to celebrate it right here in Australia, on the eve of a new dawn of performance for the brand, is special,” says Nissan Australia managing director Adam Paterson.

“This might be the first example of the all-new Z we see on local roads, but we’ll soon be seeing many more, with a new era of Z about to begin.”

MORE: From Z to Z: A history of the Nissan Z-Car

The Aussie press launch for the new Nissan Z takes place at the end of this month.

In terms of price-point (ish) competitors, there’s the Ford Mustang Fastback GT V8, the BMW 230i, and the Toyota Supra, which will soon get a manual option.

As of May this year, more than 1000 Australians had put their hard-earned money down at a dealer for their new Nissan Z – before first shipments go on sale here, and before pricing went public.

The circa 1000 money-down reservations came from a pool of 3000-odd people who lodged “expressions of interest”. The amount deposited varied depending on the dealer, Nissan said.

Nissan has yet to specify its plans around supplying its national dealers with Z stock, and whether it’ll attempt to limit dealer markups, or speculators buying then on-selling at a profit.

Numerous manufacturers have had to contend with providing the market with high-demand niche products lately: examples coming to mind span from the Suzuki Jimny, to the similarly popular (relative to supply) Subaru BRZ, Toyota GR Yaris, and Hyundai Ioniq 5.

The Nissan Z sits on a revised version of the 370Z’s rear-wheel drive bones and uses the Infiniti Q60 Red Sport’s 3.0-litre twin-turbo V6 with variable valve timing and quick-spooling small-diameter turbochargers, putting out 298kW of power and 475Nm of torque.

Power-to-weight is improved by 13 per cent over the 370Z and the acceleration time from zero to 100km/h has been reduced by a claimed 15 per cent.

The enthusiast’s gearbox is a six-speed close-ratio manual with an Exedy high-performance clutch and carbon-fibre composite drive shaft. It has an automated rev-matching function. The auto is a new nine-speed unit paired with aluminium paddle shifters.

All Nissan Zs have a mechanical limited-slip differential and launch control as standard equipment.

It’ll also come standard with Active Noise Cancellation to filter out tyre drone and wind noise, and Active Sound Enhancement to amplify the engine soundtrack inside the cabin.

Whether you pronounce it “Zee” or “Zed”, there are few Japanese car names more evocative than that of the Nissan Z-Car.

In almost continuous production since 1969 – but for a brief gap between the second 300ZX and the 350Z – the Z nameplate predates myriad memorable Japanese sports coupes, from its arch-rival the Toyota Supra (1978) to fallen comrades like the Toyota Celica (1970) and Honda Prelude (1978).

It is, however, as old as another legendary nameplate: the Nissan Skyline GT-R, which also commenced production in 1969.

Japanese readers will know the Z by an additional name: Fairlady. In a land of cars with names like Cedric and Bongo Friendee, Fairlady fits right in. The eccentric name first appeared on a Datsun roadster in 1960, and when production of the first Z-Car began it wore Fairlady Z badging in its home market.

Keen to know more? Our man William Stopford has written an exhaustive history from 1969 to 2022, which you can read here:

MORE: From Z to Z: A history of the Nissan Z-Car

The Importance of Creativity in the Workplace

‘Demolition is an act of violence’: the architects…

A Love Letter to My Past Self: You Are a Great Mom

Michael B. Jordan Wore Chanel and The Row to the…