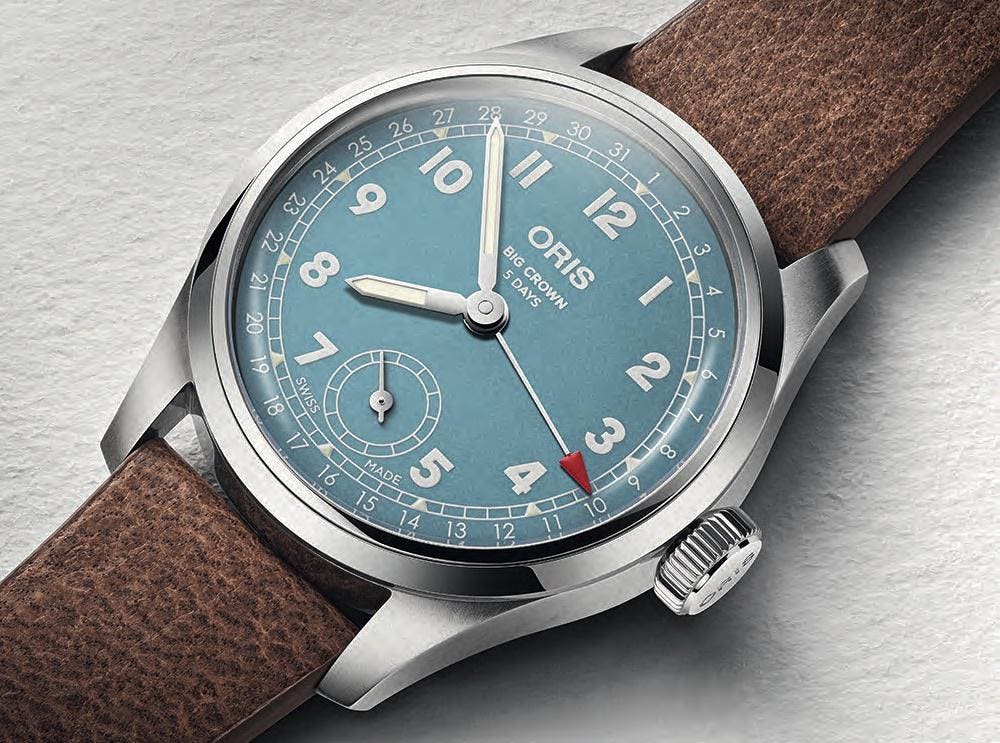 Oris, the Swiss watchmaker known for its accessible and often colorful watches with in-house movements, is releasing a new manual-wound caliber. Oris was founded in 1904, and up until the 1970s, it created some 270 mechanical movements, switching to quartz in the 1970s, along with almost every other Swiss watch manufacturer. In 2013, however, Oris started developing its own movements again, starting with caliber 110. It was the first of its caliber 100 series of hand-wound movements, with 10-day power reserves from a single barrel and patented non-linear power reserve indicators. Some series 100s also have calendar or second time zone functions.

In 2020 Oris ramped up production on a new series of automatic movements, the 400 series, with five-day power reserves, elevated levels of anti-magnetism and 10-year warranties. This year’s new 400-series movement, the caliber 473, is a hand-wound design that breathes new life into the brand’s iconic Big Crown Pointer Date model. It is based on the Oris caliber 403 automatic, with functions that include hour, minute, small seconds and drives the model’s signature red pointer date hand. The five-day power reserve, supported by two mainspring barrels, is shown on a 120-hour indicator. It is uniquely positioned on the back of the movement so as to leave the dial uncluttered.

The new Oris Big Crown Caliber 473 has a 38mm steel case, a powder blue dial, and comes fitted with a Cervo Volante sustainable deer leather strap along with a new butterfly folding clasp. Cervo Volante is a leather company established in 2016 as a way of preventing the wastage of hides left over from ecological red deer culls in Switzerland. Today, the company produces shoes, bags and other small leather goods, as well as watch straps. The Oris Big Crown Caliber 473 is water resistant to 50 meters and priced at $4,400.

Denial of responsibility! Yours Bulletin is an automatic aggregator of the all world’s media. In each content, the hyperlink to the primary source is specified. All trademarks belong to their rightful owners, all materials to their authors. If you are the owner of the content and do not want us to publish your materials, please contact us by email – [email protected]. The content will be deleted within 24 hours.
OrisOris Big Crown Calibre 473Oris Introduces An Affordable Manual Wound MovementSwiss
0
Share