Why my father fasted on Yom Kippur: On survival, memory, and the power of a family story 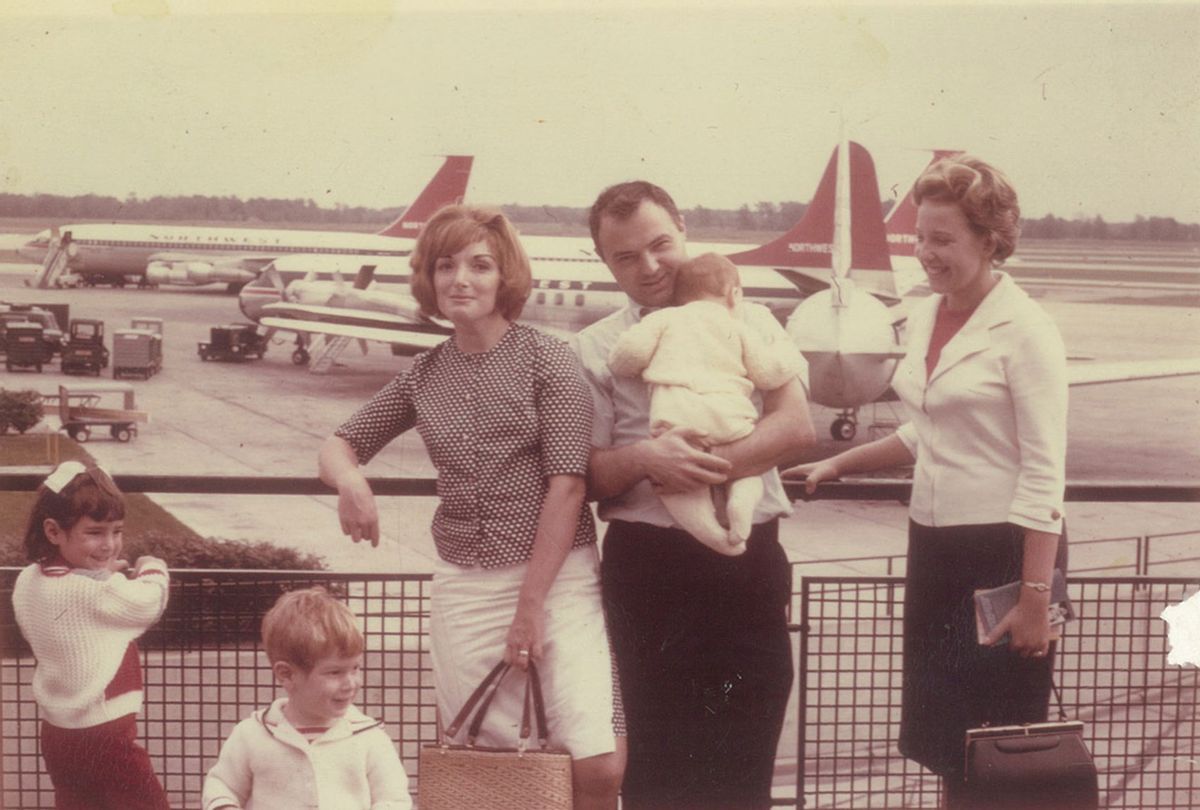 “I never prayed or fasted on Yom Kippur,” said my father in his lilting Yiddish yarn voice. Back from shul, he was breaking fast with a bagel and cream cheese, holding forth at the head of the table in our Michigan dining room. “I couldn’t wait to escape your grandfather’s traditions. But then, one September when you were little and your mom was pregnant a third time, I got the call I’d been dreading…”

“To go to Vietnam, we know,” I interrupted, able to recite by heart the spiel he shared each High Holy day.

In sixth grade, I was a leftwing confessional poet suspicious of all parental indoctrination. Hurt by my father’s preference for my three science brain brothers, I’d already given up on his religion, sexist politics and approval. I wasn’t into hearing another version of his ancient war fable that fascinated the boys.

I preferred their backstory. According to Shapiro lore, my parents met as teens on the Lower East Side. Mom — a redheaded orphan who feared Dad was a thug — was impressed when his scientific acuity landed him at Stuyvesant High. Not so Grandpa Harry, who’d made a “Shapiro & Son Window Shades” sign, hoping for a partner — the only Jewish father in history unhappy his son would be a doctor. Pre-med at NYU, Dad deferred the Korean War draft to finish his degree. “Just got into med school in the Midwest. Ya coming or not?” was his proposal to my Mom at 19. As a secretary, she put him through grad study and internships.

“I was in the Navy Medical Corps, Inactive Reserves, at St. Louis’s Public Health Service, where I stamped out syphilis by giving free beers at bars if you got a penicillin shot.” Dad and my brothers laughed.

Another favorite dinner topic of theirs: venereal disease. I rolled my eyes.

“By my residency, I thought I’d escaped the military. But 32, the call came,” he continued. “Turned out, they could send you overseas until 35 if U.S. forces needed more physicians.”

Downing my own bagel with cream cheese though I didn’t fast or pray, I half-listened as Dad recalled how, in 1964, he was director of the internal medicine residency program at Highland Park General Hospital, near our Oak Park apartment. While surprisingly anti-war for a conservative, he was a family man who wouldn’t lie and cheat (claiming “bone spurs”) or flee 15 miles to Canada as a conscientious objector. If called, he’d do his duty.

“I was ordered to Fort Knox in Kentucky on a September Sunday,” he said. “I had to take three small planes to get there. I hate small planes.”

Stuck in Louisville for basic training for more than a week, he couldn’t call Mom to let her know where he was. On his ninth night, learning his fate would be decided the next morning, he couldn’t stomach dinner. “What if I was wounded, or died, leaving Mom a widow with three kids to feed?”

On day ten, awoken before dawn, he lined up with hundreds of men outside the barracks. The commander shouted names, giving each recruit marching papers for training centers in San Francisco, South Carolina, Georgia, Hawaii, Guam, Frankfurt. One guy left on a transport plane directly to Vietnam.

“I was sweating, trying not to shake,” Dad confessed.

It was not a cause worth fighting for like World War II. A history buff, he blamed “the goddamn ignorant government for idiotically getting us into another nonsensical battle in Asia I’d have to sacrifice everything for,” he said in typically blunt fashion as mom served her noodle kugel with raisins.

“I was a man of science, I never prayed,” he added. “But as each soldier was sent to a different camp, I heard myself bargaining with God: Please don’t take me. Let me go back to my family. I’ll be a better person, husband, doctor, Jew. Finally, hours later, I was the last one standing by myself. I was starving. I’d been out there all day.”

This part I secretly liked, when he did both voices, sounding scared.

“You a surgeon?” the general asked my father.

“No. An internist sir,” Dad said. “With two kids. Another on the way.”

The general checked the list again, shook his head and said, “I have no orders for you. What do you want to do?”

Dad was stunned. Was it a trick question?

Relieved to catch three small planes back to Michigan, he had no time for a phone call. Arriving at sundown, he hugged my mother tightly at the door.

Mom piped in. “He yelled, ‘Thank God I’m here,’ kneeling down to kiss the ground outside.”

This was a new detail. He really put his lips to the dirt?

“He was starved. He hadn’t eaten in 24 hours. He had no idea it was the end of Yom Kippur,” she recalled. “He was shocked he’d inadvertently fasted on the holiest day of the year. He saw it as a sign. A bunch of his colleagues wound up in Vietnam. Some never came back.”

We had no idea why he’d been spared. We speculated endlessly over the decades as he reiterated his tale.

“After that, I promised God I’d go to temple with your mother and fast every Yom Kippur,” he concluded.

“I have to go finish my homework,” I said, heading upstairs.

“First help your mother clear the table,” he told me (but not the boys).

I swore under my breath it was the last time he’d push me into the role of Mommy’s Little Helper. Dad kept his word, for 50 years. So did I, leaving early for college to study creative writing at NYU, staying East.

His proudest feat was putting his kids and grandkids through undergrad and graduate school, producing two physician sons. He was less thrilled by my freelance writing career. (If I revealed anything about our family, he’d email, “Stop running naked through the streets!”) Or so I thought, until I overheard him telling his doctor he was proud of his daughter the author “who stuck to her guns,” words I didn’t know I’d waited half a century for.

This August, working on a project with a war refugee and reading comparisons of the heartbreaking fall of Kabul to what happened in Saigon sparked my curiosity.

“When was Dad called up for Vietnam? September ’64, right?” I texted my mother and brothers.

“No, that doesn’t make sense,” said Mike, the youngest, a cardiologist at the VA hospital in Chicago.

Looking up dates, I saw Yom Kippur in 1964 fell on Wednesday, September 16. That fit.

Mike was dubious about the timing. “They weren’t ordering many doctors to Vietnam in the fall of ’64,” he said. “There were way more sent in 1968, right before I was born.”

Could details of Dad’s famous fasting mystery be mistaken? I went Google crazy but couldn’t find the answer.

“Dad said it was ’64. She was pregnant with me when he got called up,” insisted Eric, a computer programmer who’d wired the Shapiros across five states.

“Or maybe it was the fall after Eric was born?” Mike asked. “I can apply online to the National Military Archives for Dad’s service record. Reserve records may require a different application.”

“I thought they let him go because he was a married father?” I threw out.

“Because he wasn’t a surgeon,” wrote Brian, a trauma surgeon with two pre-med sons, who of course focused on that. “Though Dad told me he thought Mom was really kind to a military clerk he worked with and that could be why.”

“I think it was just a government screwup. Why the hell would they call up a 32-year-old married doctor with kids anyway?” asked my mother. I’d always seen her as the romantic one.

Was there a different Dr. Shapiro, a surgeon they’d confused him with?

“You didn’t see the timing as a spiritual omen?” I phoned to ask Mom.

“No, but I believe he believed it,” she said.

All I knew for sure was that each Yom Kippur, Dad — the Shapiro storyteller — recounted why he took up fasting and praying. His annual cantorial chronicle ended three years ago, when his heart gave out and we lost him at 85. In his final week, delirious from medication, he’d recited Edgar Allen Poe’s “The Raven” to the nurses, reminding me he was the one who’d first taught me poetry, singing me stanzas as a baby instead of lullabies, the die cast.

“Your words have force and direction, just like his,” his physician whispered after my eulogy at the funeral. “No hair on your tongue either.”

I never noticed that I’d mirrored Dad’s verbal intensity, forgoing small talk. Had I unconsciously recreated his speech patterns, becoming what was missing?

This week, lighting a white Yizkor memorial candle for my father, I’ve decided to fast in downtown Manhattan, his old haunt, remembering how lucky we were that he came home to us that night, repeating his story which is now my story —  and prayer.

7 Effective Ways To Save Money on Electronic Products