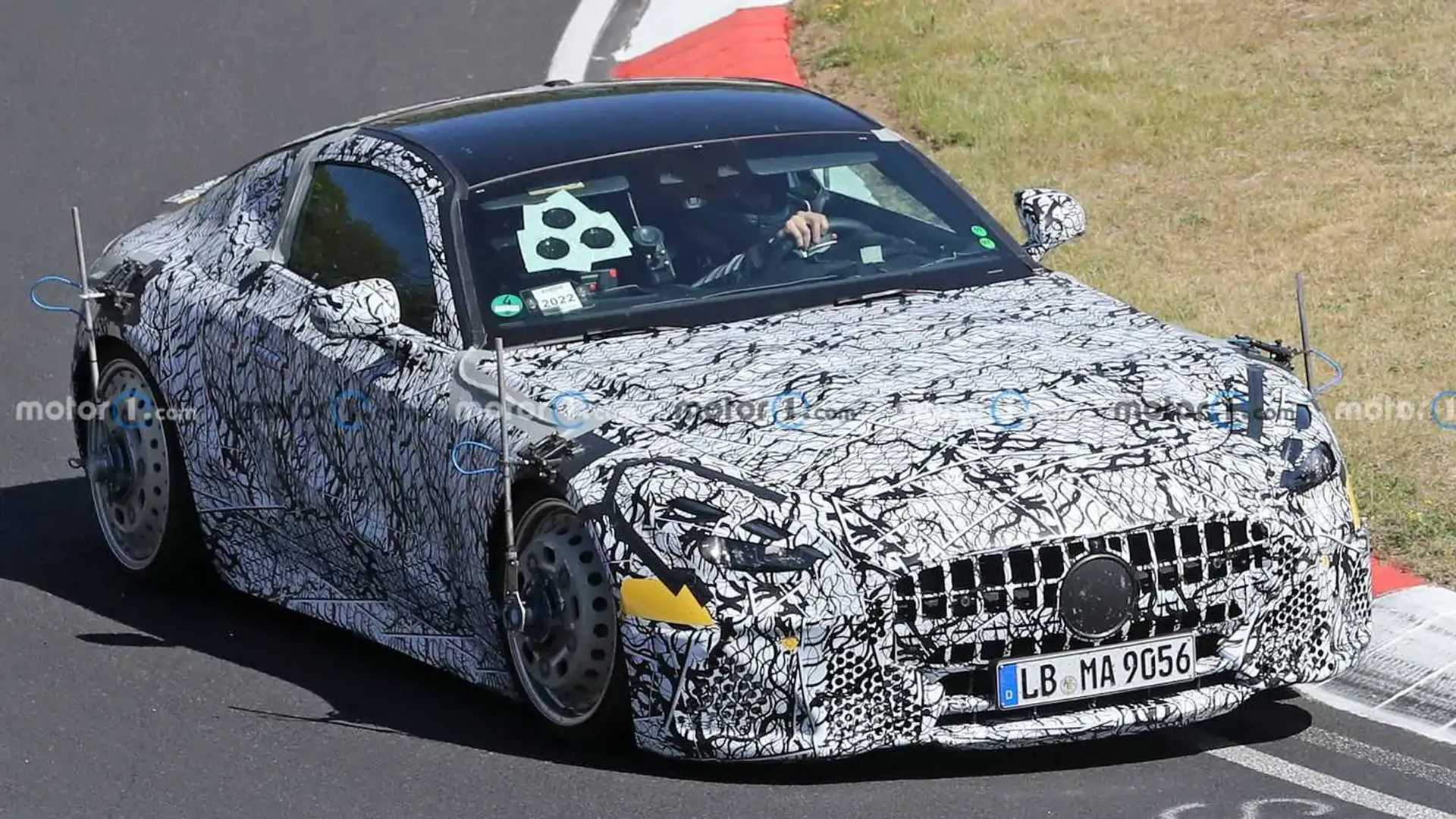 All signs point to Mercedes offering the new AMG GT Coupe with a variety of powertrain options. It’ll have a V8 engine, but the most potent version will likely be the plug-in hybrid our spy photographers have caught for the first time. Mercedes covers the car in camouflage, but it can’t hide the charge port door on the rear bumper.

The photos show the charge port door partially outlined in yellow, squeezed between the taillight and exhaust pipes. The AMG GT and the SL are siblings in the Mercedes lineup, and earlier spy shots have captured the roadster testing with a plug-in hybrid powertrain.

We expect Mercedes to pair its twin-turbocharged 4.0-liter V8 with an electric motor. A similar setup in the GT 63 S E Performance cranks out 831 horsepower (620 kilowatts) and 1,033 pound-feet (1,400 Newton-meters) of torque, and we expect similar out of the new GT.

Previous spy shots appeared to have captured the “43,” “53,” and “63” variants of the model, indicating a variety of potential powertrains. Even the hybrid might offer different outputs. There are rumors of a less-powerful 700-hp (521-kW) SL variant that might spawn an AMG GT twin.

Mercedes tries to hide the GT’s design under a wrap and cladding, but it looks like the two-door will be an evolution of the current model’s styling. It also looks like Mercedes might differentiate the hybrid GT with unique a front fascia, but this is one area Mercedes does well on hiding.

The regular AMG GT Coupe will launch first, hopefully breaking cover before the end of the year, but nothing is set in stone. Even if Mercedes reveals the GT this year, we don’t expect the plug-in E Performance variant to debut until sometime in 2023.

The Mercedes lineup is growing in all sorts of directions as the brand shifts toward electrification, but that transition is still years away from being complete, and the company hasn’t given up on the combustion just yet. A plug-in hybrid coupe with a V8 and 700 hp or more sounds like a fun-filled future before the EVs take over and upend everything.

Prince Harry and Meghan Markle: Ex-royals not to appear on balcony with Queen in Jubilee celebrations