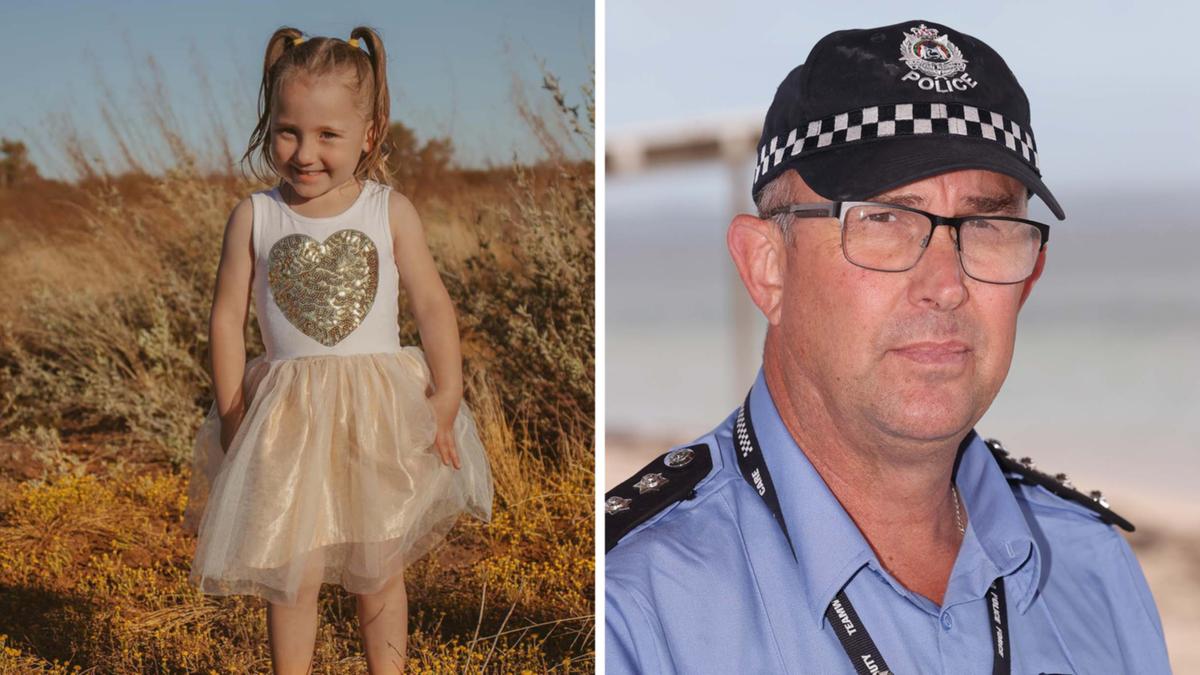 He was the police officer who led the painstaking search for Cleo Smith in the first desperate hours and days after she vanished from a tent near Carnarvon.

Insp. Jon Munday was also the first person to reveal to the world that it would not have been possible for the tiny four-year-old to reach the height the tent zipper had been opened — and that police were dealing with a possible abduction.

The senior officer — whose 34-year career has involved leading roles not only in investigating Cleo’s disappearance but the Claremont serial killings case and the unsolved murder of Gerard Ross — is today one of four WA officers to be awarded the Australian Police Medal.

Insp. Munday has served a big part of his three-decade career in country WA at 15 police stations across the State.

Currently based in the Mid West-Gascoyne district, Insp. Munday said the Cleo investigation was his career highlight, which ended with her being found alive in the Carnarvon home of Terence Kelly 18 days after he abducted her.

He described the “horrible” early days of the search, saying it became clear within the first six to 12 hours that “something wasn’t right”.

“My job was really to find Cleo within the defined search area, and or to prove categorically that she wasn’t there, and there was no sign of her there,” he said.

“It was a bit of a two-pronged brief, firstly searching for her, and secondly searching for any evidence that would lead us to where she might be and if there was any third party involvement.

“Certainly, as the days dragged on, it was increasingly clear that she wasn’t there, and we were facing the worst possible scenario that she was snatched, or left the tent voluntarily and was taken.”

Insp. Munday added, “we went above and beyond there … with all the volunteers, the SES, the Defence Force and the community volunteers, (the search area) was significantly greater than what would normally be acceptable to be able to suspend a search”.

“It was just one of those unique things — we just had to keep going to find answers, and it was just really pleasing that it ended well.”

Insp. Munday said it was “surreal” to be recognised with an APM and that it was “very humbling”.

“I don’t go to work trying to do anything else than — it’s a bit cliche — but to just do my job and to do my job the best I can, and if that results in people appreciating what I do, then that’s great,” he said.

He added, “I love working in regional WA, where I think it’s easy to see the difference you can make in the community and helping people out”.

Insp. Munday was also involved in the arrest and subsequent search of Claremont killer Bradley Robert Edwards’ Kewdale home in 2016, at which time he was also in charge of investigating the cold case murder of Newman schoolboy Gerard Ross.

He hopes that the case could one day also be solved.

Among Mr Longhorn’s achievements over a three-decade career include chairing National Taskforce Morpheus, which aims to disrupt and combat the threat of bikie gangs.

In 2021, he was also in charge of investigations that netted 339kg of ice and $54 million — the largest illicit cash seizure in Australia.

Det-Supt Fairman, who joined WA Police in 1988, is currently in charge of the sex crime division, and was the initial commander for Taskforce Ravello after the shooting of Nick Martin.

He has also played integral roles in disrupting serious and organised crime, managed several regional police stations in the Wheatbelt and developed a program to improve the skills of frontline officers to respond to active shooter incidents.

Det-Sgt Curley was recognised for “going above and beyond” in targeting offences and supporting victims of crime, particularly in complex fraud and sexual offences.

She was also an inaugural member of a new specialist unit created to investigate serious organised crime, and was instrumental in developing new methods of identifying the use of dedicated encrypted communication devices by serious criminals.

“Det-Sgt Curley’s innovative investigation techniques and use of new technology has enabled her to successfully charge an offender with more than 80 sex-related offences after he used social media and dating apps to target victims,” WA Police said.

“Her investigation identified 19 victims who were unknowingly drugged and sexually assaulted whilst also being recorded.

“She maintained an objective approach to investigate the allegations whilst continuing to support the physical and emotional well-being of all the traumatised victims.”

Denial of responsibility! Yours Bulletin is an automatic aggregator of the all world’s media. In each content, the hyperlink to the primary source is specified. All trademarks belong to their rightful owners, all materials to their authors. If you are the owner of the content and do not want us to publish your materials, please contact us by email – [email protected]. The content will be deleted within 24 hours.
awardsCleo SmithcrimeNewsPerthWA News
0
Share