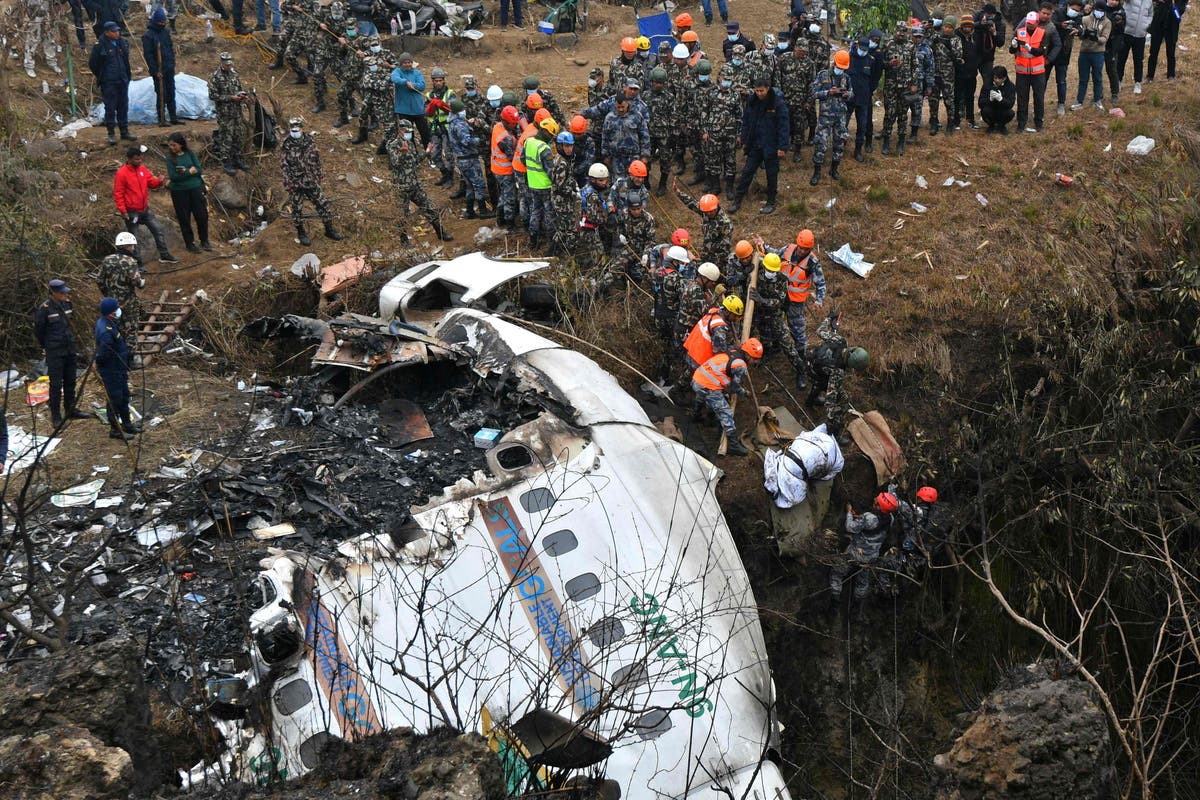 Nepal’s aviation authority has released the names and nationalities of the passengers on the Yeti Air crash yesterday, 68 of whom have been confirmed dead.

The twin-engine ATR 72 aircraft was carrying 72 people – four crew members and 68 passengers – when it crashed near the airport of the tourist city of Pokhara on Sunday. All but four bodies have been recovered.

Fifteen foreign nationals were among those on board – from India, Russia, South Korea, France, Australia and Argentina – including a British man named as Calum Ruan Crighton, who was initially thought to be Irish.

Meanwhile, a video being widely shared online was allegedly filmed and broadcast on Facebook Live by one of the passengers in the final moments of the flight.

Earlier, a Pokhara airport spokesperson revealed the pilot asked the airport to switch runway minutes before his aircraft plunged into a deep gorge.

Experts who viewed video footage of the disaster said on Monday that the plane appeared to have stalled in mid-air, which can happen when a pilot tries to pull their aircraft up too steeply or slow down too much.

Australian teacher and avid surfer among the dead

We now have more detail about Myron William Love, the Australian teacher who died in the plane crash.

Mr Love, 29, was described by Aussie media as an avid surfer, cyclist, and traveller who worked as a temp teacher in Sydney.

“It is with extreme sadness to say we have lost one of the best humans I have ever known,” said Sydney artist James Lesjak-Atton on Instagram, according to The Guardian (the post is no longer accessible).

“Myron was one of the loves of my life. A truly kind, fun, energetic man. We will forever love you my man.”

‘Her father asked her not to become a pilot’

The family of co-pilot Anju Khatiwada has described her determination to fly even in the face of opposition from her father.

Gopal Regmi, a relative and close friend of her father’s, told The New York Times: “Anju’s father had asked her not to choose the pilot profession. After her husband’s tragic death, she was determined to become a pilot.”

Mr Regmi also recalled that, while applying for a visa to train in the US, Ms Khatiwada had told officials: “I just want to wear the white uniform like my husband and work as a pilot.”

According to airline officials, Ms Khatiwada had 6,396 hours of flying time when she died – a respectable amount for a commercial pilot. The flight’s captain, 58-year-old Kamal KC, had 21,900 hours.

‘Going to Nepal was her dream as a mountaineer’

An Argentine hotel manager with a passion for climbing and the outdoors has been named as one of the crash victims.

The Palevecino family is reportedly known locally for running the Hotel Suizo, having arrived in Argentina from mountainous Switzerland at the beginning of the 20th century.

“Jannet Palavecino, may you rest in peace. We will miss you and always keep you in our memory. My greetings and condolences to all the family and affections,” said Neuquén governor Omar Gutierrez on Sunday.

“Going to Nepal was her dream as a mountaineer,” one of Ms Palavecino’s friends posted on social media.

Another said: “Maximum respect and admiration for a powerful woman who lived and died fulfilling her dreams.”

Another possibility for the cause of this crash is a collision with birds – generally known as a “bird strike”.

According to the Associated Press, in the days before Pokhara’s brand new international airport opened on 1 January, there had been concerns about the high number of birds in the area, drawn by the city’s two rivers and a landfill dump near the airport.

Air safety expert Amit Singh suggested that a bird strike could have led the plane’s crew to break off their landing and circle around for another try, exacerbating the risk of a stall.

“A high thrust setting can lead to a stall,” Mr Singh said. “Go-arounds are most often mishandled by crew… so again the issue is, how did the pilot cope with the failure?”

More evidence for the theory that plane stalled

Here’s more detail from Indian air safety expert Amit Singh about the possible cause of this crash.

“If you see the trajectory of the aircraft, the aircraft’s nose goes up, and the nose up would be associated with a reduction in speed,” Mr Sing told the Associated Press.

“When they have stalls, typically one wing goes down and wings are basically generating the lift. So as the air flow reduces, the lift generated is not enough to sustain the aircraft in flight and the wing drops and the aircraft nosedives.”

Yeti Air has said that the cause of the crash is still under investigation.

Indian town mourns three victims who had been travelling to funeral

Three Nepali men who were travelling to attend the funeral of a Christian evangelist were also killed in the crash, according to The Times of India.

Raju Thakuri, Rabin Hamal and Anil Shahi were reportedly returning to Pokhara after paying their respects to Mathew Philip in the Indian state of Kerala.

Mr Philip had been a Christian minister for 45 years in Nepal until two years ago, when he returned to his hometown of Anickad after being diagnosed with cancer.

His son Joel Mathew told the Times that Mr Mathew had been a father figure to the three men and their two surviving companions, who had parted from them in Kathmandu, Nepal.

“They spent the whole day at the church and at home and left in the evening after the funeral,” said Mr Mathew.

“At the Anickad Brethren Assembly, where the mortal remains of my grandfather were kept for public homage, they sang a Nepalese song which my grandpa liked most. They also spoke about him and how he had influenced their lives.”

Thomas KA, a minister in Anickad, said: “We are all familiar with these Nepali youngsters as they often visit this village and attend our Assembly.”

Their deaths cast a further pall over Anickad’s Christian community, which had been already mourning Mr Philip’s loss.

A well-known Nepali folk singer with a sizeable following on TikTok was among the passengers killed in Sunday’s plane crash.

Nira Chhantyal, who often posted videos of her performances to her roughly 125,000 TikTok followers, had been travelling to Pokhara to perform at an event, Insider reported.

Less than an hour before the disaster, she had posted on her Facebook page in honour of the Maghe Sankranti festival, which marks the winter solstice.

“On the auspicious occasion of Maghe Sankranti, I express my best wishes to all the parents, brothers and sisters living in the country and abroad,” wrote Ms Chhantyal.

Since then, comments under her posts have been flooded with fans and well-wishers expressing their sorrow at her death.

“You left, your memories are still remembered. We won’t meet now,” said one, with a string of weeping emoji. Another said: “You went to Pokhara but left in a way that you will never return. Heartfelt condolences.”

‘Why did this senior captain allow the wing to stall?’

Two more aviation experts have agreed that the Yeti Air plane appears to have stalled in mid-air.

Neil Hansford, chairman of the California-based consultancy Strategic Aviation Solutions, told Australia’s ABC News: “I think this one is going to get down to what’s called a stall.

“[The pilot had] been coming in too slow. As soon as you bank to the left, then obviously you lose all the wind lift and it goes down like a stone.

“Once you get into a stall at low altitude and low speed, there’s generally only one consequence.”

He argued that the aircraft would have had automated stall warnings, meaning the crash was probably due to human error.

“When you’re at low speed, you don’t start making heavily banked turns… think [the pilot’s] level of competence had been reached.”

James Nixon, a retired airliner captain, said investigators must “find out why this most senior captain allowed the speed to decay on the approach and for the wing to stall”.

He added: “When you stall an aircraft, it’s no longer [an] aircraft. It’s like a grand piano dropped out of a tall building.”

A veteran pilot and air safety expert who viewed video footage of the Yeti Air plane falling out of the sky has offered one possible explanation for the crash.

Amit Singh, founder of an Indian non-profit called the Safety Matters Foundation, told the Associated Press that the plane appeared to have stalled in mid-air.

A stall occurs when a plane tilts backwards to the point where its wings can no longer generate enough lifting force to keep the craft aloft, causing it to fall.

This is especially likely at low speeds, where the plane must be tilted back in order to maintain lift, bringing it closer to the stalling point.

Final moment of Nepal plane before it crashed killing 68 people

The footage viewed by Mr Singh was filmed by Diwas Bohora, a bystander in Pokhara, Nepal who saw the plane suddenly tilt to one side before it crashed.

That could be due to a spin, which can easily result from a stall, especially if the plane is trying to turn or if the pilot fails to control the situation.

Nepal should break up Civil Aviation Authority amid ‘conflict of interests’, says expert

Sunday’s crash has underlined the need for Nepal’s government to break up the Civil Aviation Authority of Nepal (CAAN), experts have warned.

The authority currently both regulates airlines and manages airports, but this “leads to a conflict o interests”, a retired pilot told Reuters.

“The government must immediately separate the regulatory body and service provider by splitting the Civil Aviation Authority of Nepal (CAAN) which is doing both works now,” said KB Limbu, an aviation expert and a retired pilot. “This leads to a conflict of interests.”

Xbox’s Developer_Direct is their most important showcase ever

CEOs are more pessimistic than they’ve been in a decade, survey finds