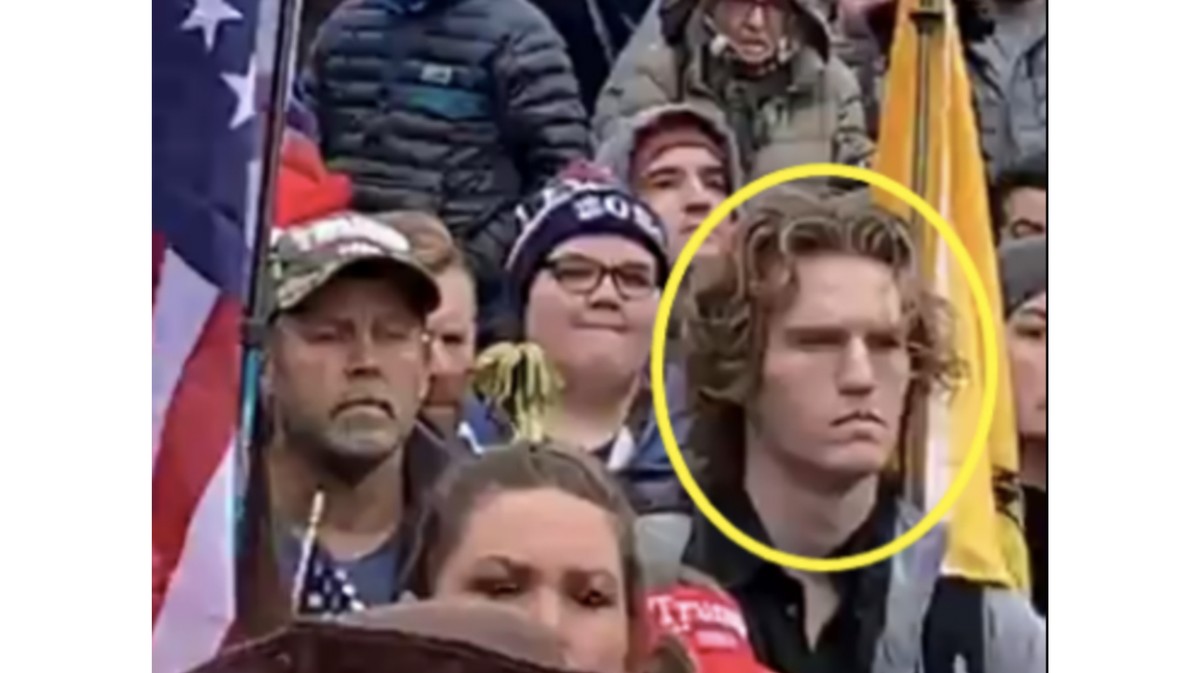 A previously unidentified insurrectionist who stormed the U.S. Capitol on Jan. 6th, 2021 has been identified for the first time as a former history major who repeatedly tweeted that former Vice President Mike Pence was a “Judas” and a “rat bastard.”

Stewart Curtis, who grew up in Sweet Home, Oregon, and studied at Southern Oregon University, was identified by researchers at Advance Democracy, a nonpartisan nonprofit that tracks extremists, and verified by a VICE News investigation.

Images of Curtis were first posted online last August by the Sedition Hunters, a global community of open source intelligence (OSINT) investigators that has been working to assist the authorities in identifying those who stormed the Capitol just over two years ago. The group was unable to identify Curtis, who they had nicknamed #WannaBeKilmer due to Curtis’ resemblance to the actor Val Kilmer.

But their images show Curtis in the crowd approaching the Capitol on Jan. 6, alongside his two sisters, Moira Curtis, who is a car salesperson in Corvallis, Oregon, and Laurel Adams, a school teacher in Sweet Home.

Then at 2:07 pm, moments after the first insurrectionist breached the Capitol, video footage shows Stewart Curtis in a crowd of individuals pushing against a police line on the Western side of the U.S. Capitol building.

Curtis was identifiable because in most of the footage he can be seen holding up a red iPhone appearing to record what was happening.

Half an hour later, at 2:38 pm, Curtis was captured entering the U.S. Capitol via the Upper West Terrace, again holding a red cell phone. He didn’t stay very long however, and was captured on camera leaving via the same entrance just 10 seconds later.

However, Curtis didn’t leave the Capitol grounds, and at an unknown time he entered the building again via another entrance, captured on video with a U.S. flag draped around him on footage published by National Geographic. He then can be seen inside the building exiting the Senate’s Mark O. Hatfield room, shouting to another rioter.

It is unclear how long he remained inside the building the second time around, or how he left.

There is no video footage to indicate that Moira Curtis or Laurel Adams entered the Capitol.

VICE News contacted Stewart Curtis, Moira Curtis, and Laurel Adams on multiple occasions via email, phone, and social media, but they did not respond to requests for comment. Researchers at Advance Democracy were able to identify Curtis via images he posted on his Facebook page and Instagram account. VICE News independently verified these accounts and images.

A spokesperson for Southern Oregon University confirmed Curtis was a student there during the fall 2019 and winter 2020 terms. On Facebook, Curtis described himself as studying chemistry, but the University told VICE News he was a history major.

In the days after the attack on the Capitol on his Twitter account, Curtis blasted Pence for certifying the election.

In one tweet, he responded to a message from Pence’s official account about the death of Capitol Police Officer Brian Sicknick following the insurrection, calling Pence a “Judas.”

In another post on Twitter on Jan. 8, he said Pence was “worse than Judas. He immediately regretted his actions. Pence is a rat bastard of the highest order.”

That tweet was in response to a post from an account belonging to the QAnon-linked militia group known as the 1st Amendment Praetorians, commonly referred to as 1AP, two members of which were on Capitol grounds on Jan. 6, according to the group’s lawyer.

Curtis may have been aware of the group because his father, James Curtis, was at the time a member, according to media reports, court filings,  and audio recordings posted online.

1AP, which was co-founded by former Army sergeant Robert Patrick Lewis, came to prominence in the lead up to the 2020 election when the group provided security for a march organized by pro-Trump activist and social media influencer Brandon Straka, who was arrested during the Capitol attack.

Lewis’s group, which is made up of former military and law enforcement personnel, quickly ingratiated themselves with the people that surrounded former former President Donald Trump and pushed his lie that the 2020 election was stolen.

In the months after the election, Lewis and his group provided security for a range of prominent MAGA figures, including disgraced former national security adviser Michael Flynn and his brother Joe, Stop the Steal founder Ali Alexander, pillow salesman and funder of the Big Lie Mike Lindell, and “Kraken” lawyer Sidney Powell.

Lewis’ group also took part in investigations to find so-called evidence of election issues regarding supposed election irregularities. One of those efforts was a seven-week deployment to the home of election conspiracist Staci Burk in Arizona, after she claimed that a member of the Koch family admitted to unloading fake ballots from a South Korean airplane, a claim that sparked the unhinged bamboo ballot conspiracy that took hold in right-wing circles.

Among the dozen or so 1AP members who provided security Burk during the seven-week period was James Curtis. His presence was revealed in multiple audio recordings of conversations between Burk and Curtis that the former shared with Raw Story and eventually posted on her SoundCloud account.

Stewart Curtis has been inactive on social media for over a year. He has not posted publicly on his Facebook, Instagram, or Twitter since Jan. 13, 2021, when he posted two tweets in the space of 12 hours. Both messages responded to the same post from Pence about the death of Republican mega donor Sheldon Adelson, and both were identical: “Judas!!!!”

Want the best of VICE News straight to your inbox? Sign up here.