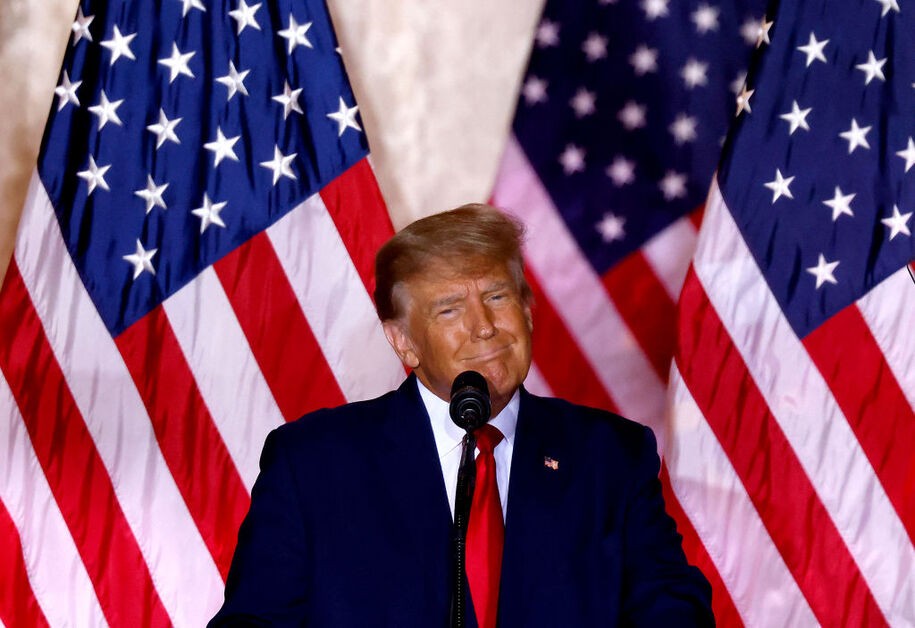 We begin today with Karoun Demirjian and Toluse Olorunnipa of The Washington Post reporting about Number 45’s message on Truth Social to “terminate” even the Constitution of the United States itself.

Trump’s message on the Truth Social platform reiterated the baseless claims he has made since 2020 that the election was stolen. But he went further by suggesting that the country abandon one of its founding documents.

“A Massive Fraud of this type and magnitude allows for the termination of all rules, regulations, and articles, even those found in the Constitution,” Trump wrote.
The post came a day after Twitter’s new owner, Elon Musk, claimed he would expose how Twitter engaged in “free speech suppression” in the run-up to the 2020 election. But his “Twitter Files” did not show that the tech giant bent to the will of Democrats.
“UNPRECEDENTED FRAUD REQUIRES UNPRECEDENTED CURE!” Trump followed up in another post on Saturday afternoon on Truth Social.

Or will we simply hear a variation of there’s nothing wrong with “humoring” Number 45? Will they say that Number 45 can’t get away with terminating the Constitution?

The Republican Party has no platform and no policy other than what Number 45 says; That is, election denial, conspiracy theories, and inciting violence and insurrection.

This country is in more danger of losing its democracy than it was yesterday. I believe that Trump will attempt to do exactly what he’s said that he’s now willing to do.

Tim Miller of The Bulwark writes about on the sheer insanity and disinformation behind Number 45’s “reasoning” for wanting to terminate the Constitution: Twitter troll owner Elon Musk’s collusion with a journalist about something, something, Hunter Biden…something.

Here’s a synopsis for the blessedly uninitiated:

On Friday, Elon Musk promised to reveal “what really happened with the Hunter Biden story suppression by Twitter.” It turns out that he had provided a trove of internal corporate documents to the Tulsi Gabbard of Substack, Matt Taibbi, who said they amounted to a “unique and explosive story”—revealing the juicy details inside Twitter’s decision to suppress the New York Post’s Hunter Biden laptop story, which had previously been rejected by such liberal outlets as Fox News and the Wall Street Journal due to its suspicious provenance. Taibbi agreed to divulge these private emails on Twitter itself rather than via his Substack as part of a “few conditions,” which he does not detail, that were imposed on him, presumably by Musk or a Musk factotum.

The documents Taibbi tweeted on Friday were titillating in the way that reading private correspondence revealing what people were really saying around a controversial subject always is, but nothing new was learned about the contours of the story. The leak mostly relitigates two facts that have already received much ink across the media: 1) How Twitter throttled the New York Post’s initial story about Hunter’s laptop based on what we now know was an incorrect assessment of its source; and 2) How political campaigns and government agencies have worked with social media companies—in this case Twitter—to flag troubling content.

On the first point, the emails confirm the essential consensus that has come into focus in reporting on the matter: Twitter got out over its skis on the ban and a typical corporate bureaucratic goat rope ensued as the company tried to “unfuck” the situation, as one employee put it. To say that this is not a new revelation would be an understatement given that Twitter’s former CEO Jack Dorsey admitted that this was a mistake over a year ago.

Now that abortion has been banned in more than a dozen states, abortion opponents want to stoke confusion about the legality of not just having an abortion, but even of discussing the procedure. The ultimate goal seems to be ensuring that women are unclear about their options to obtain an abortion or contraception, in their home state or elsewhere.

Signs of this trend can be found around the country. In Nebraska, law enforcement obtained a warrant to search a teenager’s private Facebook messages, in which she told her mother of her urgent desire to end her pregnancy. The mother is now being prosecuted on charges of helping her daughter abort the pregnancy by giving advice about abortion pills.

Proposed legislation in South Carolina would have made it unlawful to provide information about abortions. In September, the University of Idaho issued guidance that it might be illegal for employees to “promote” birth control or abortion. In Texas, two abortion funds (groups that help people pay and travel for abortions) this year received deposition demand letters from people tied to anti-abortion lawmakers for information on anyone who has “aided and abetted” the procedure.

Ian Millhiser of Vox reports on a case to be argued by the Supreme Court that’s one of the latest salvos in the right-wing war against the LGBTQ community.

303 Creative v. Elenis, a case about a website designer who refuses to design wedding websites for same-sex couples, could potentially become one of the most consequential anti-discrimination cases in the Supreme Court’s recent history. It asks whether the First Amendment’s free speech protections give at least some anti-LGBTQ conservatives a constitutional right to violate civil rights laws.

The case is also a complete mess. Indeed, it’s hard to pin down what, exactly, the two parties to this case actually disagree on.

Lawyers from the Alliance Defending Freedom (ADF), a Christian-identified, anti-LGBTQ organization, represent Lorie Smith, a web designer who wants to sell custom wedding websites to opposite-sex couples — but not to same-sex couples. They argue that Smith should be exempt from a Colorado law prohibiting discrimination on the basis of sexual orientation.

The FSO poll does not diverge all that much from the results of an October public-opinion study conducted by the Levada Center, Russia’s only large independent sociological institute. In the Levada study, 57 percent of respondents said that they supported, or would probably support, peace talks with Ukraine. Only 27 percent expressed the same range of support for continuing the war.

The FSO’s own polling indicates that Russians’ attitudes about the war have changed. As late as July 2022, only 30 percent of survey respondents favored ending the war by peace negotiations. Comparing the new results to those collected in the summer make the shift obvious[…]

Kremlin insiders who spoke to Meduza, however, said there’s little concern in the administration about potential mass protests, though they acknowledged that “it’s best not to raise the temperature, and not to anger people if not necessary.” Russia’s state media and propaganda outlets, moreover, have already received instructions “not to dwell on the war.” According to Meduza’s sources, the mass media is now being told to focus instead on a “more positive agenda.”

Almost exactly a year ago, Angela Merkel left the Chancellery as a heroine of the free world. The last images of her as Germany’s leader showed a woman in a heavy overcoat against the icy cold at the Bendlerblock – the Defense Ministry in Berlin where Claus von Stauffenberg and his accomplices were hanged following their unsuccessful attempt to assassinate Adolf Hitler – listening to the German military band playing a folk-pop song by Nina Hagen, who is from East Berlin, though left for the West and even became famous as a punk singer in New York. A song from Hildegard Knef followed, a singer who injected a bit of rebelliousness into stolid postwar Germany.

They were the song requests of a confident German woman. The first to ever hold the office, the first eastern German, the first scientist. The polar opposite of the populists and machos of this world.

Yashraj Sharma of NBC News reports that Elon Musk’s ownership and management of Twitter is also increasing hate speech and extremism in India.

The fact-checking website’s work debunking fake news and calling out hate speech by powerful people against India’s ethnic and religious minorities has made it one of the country’s leading independent news outlets, earning its founders a mention on an unofficial shortlist for this year’s Nobel Peace Prize.

“We are able to make certain topics the center of conversation” on Twitter, said Pratik Sinha, who founded Alt News with a fellow software engineer, Mohammed Zubair.

In addition to using Twitter to defuse tensions both online and offline, the nonprofit Alt News relies on the platform as an important source of crowdfunding.

All that is now in jeopardy amid the chaos at Twitter since its takeover last month by billionaire entrepreneur Elon Musk. With 24 million users, India is Twitter’s third-largest market after the U.S. and Japan, as well as one of its greatest challenges. But more than 90% of Twitter’s 200-odd employees in India were reportedly among the thousands worldwide who have lost their jobs under Musk’s ownership.

Zhijun Hu of The Diplomat asserts that while the United States and China are different in many ways, the two countries do traffic in similar types of anti-LGBTQ rhetoric; China even more so.

Unfortunately, this notion that being gay or trans is like a contagion that needs to be contained or cured, after years of retreat, has regrouped and is on the march again. We see this in the rise of “Don’t Say Gay” in the United States and in the development of analogous — though more sweeping — policies in China.

In China, new national standards classify online content related to “sexual orientations” and “gender identities” that are “different from most people” as “harmful” to youth. These standards came on the heels of bans in the entertainment industry targeting “sissy men” and stories with hints of same-sex romance, the closure of dozens of social media accounts of LGBTQ student groups and the disciplining of student advocates, greater censorship of LGBTQ stories in media, the disbanding of several LGBTQ advocacy groups, and severe restrictions on the activities of the groups that remain.

With LGBTQ expression and advocacy being pushed out of the public sphere, discrimination and pseudoscience are reoccupying the field, leaving the LGBTQ community, especially youth, more vulnerable. For example, last year, a local education bureau in southern China awarded a middle school guidance counselor for a case study about the treatment of a student who was “situationally gay” (meaning that the student was not “truly” gay but was only temporarily so due to social circumstances). The counselor explained that one reason for becoming gay is “having contact with gay groups while growing up.”

Finally…well, I have to end on an upbeat note.

What did provide a few minutes of sheer hilarity, though, was Alabama coach Nick Saban begging making a pitch for his two loss team to make the CFB playoffs, lol.

Have a good Sunday, everyone!